Leading up to the release of her book, The Food Babe Way, Vani Hari’s Facebook page was awash with promotions and pleas to her followers to pre-order the book “the food industry doesn’t want you to see.” On the evening of its release, Hari announced a Twitter “party” to celebrate with her fans. The idea was for Twitter users to chime in with hashtag #FoodBabeWay to promote the book. As she is wont to do, Hari played martyr, painting the entirety of her detractors with a hate-saturated brush. I could barely believe my eyes when I saw it: 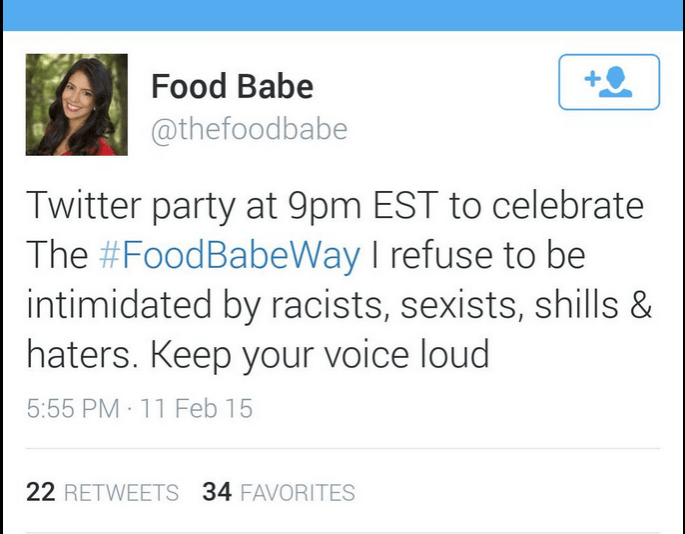 As Hari’s most outspoken Indian-American, female critic, I think I’m among those qualified to address this. My first reaction was to wonder whether any of Hari’s critics had recently made a racist or sexist remark about her. Then I realized that perhaps she was referring to the larger world of Internet commenters. Hari has previously referred to her detractors as misogynist, sexist, industry shills. In a blog post responding to a critical NPR piece, Hari states,

Instead of focusing on the issues at hand I’ve raised about the food industry, their go-to criticisms are ad hominem personal attacks: they’ve attacked me, as a woman, in ways they’d never attack my male colleagues. I am personally being subjected to hate speech, harassment and cyber-bullying on a daily basis.

As an outspoken woman online, I myself am frequently subjected to hateful bullying. While I would never condone this type of harassment, to categorically dismiss all criticisms as hate speech is an intentional attempt to distract. I responded in detail to her diatribe here. To borrow a quote from myself:

Many women have been targets of misogyny online. Internet misogyny is a scourge that we all should continue to combat together. I too have been targeted, told that I’m “poisoning” my children and that it will be my fault if they ever suffer a terminal illness. In addition, I’m Indian-American just like you, and have always defended you against ignorant racist remarks, in part because I know how it feels…Conflating misogyny with relevant opposition is underhanded. You are using this in an attempt to derail the entire conversation–a public conversation in which you’ve never even been willing to engage. You’re throwing yourself a pity party and inviting your entire army.

I have been tactful and civil with Hari in the past. Indeed, while the dark underbelly of the web is rife with mean and even threatening people, the majority of her outspoken detractors have not been hateful in their reproach. Calling one’s opponents racist is no minor allegation. Hari pulling the race card from her Deck of Deflection makes her look naïve at best, and delusional at worst. Included in Hari’s Deck of Deflection are the Sexist Card, Shill Card, Hater Card, and now the Racist Card. Like I’ve said, I’m a woman, I’m an ethnic minority, and as such I’m extremely careful about calling anyone racist or sexist. If and when one claims racism or sexism, s/he should be ready to produce evidence.

Thus, I’ll make it easy for Hari by naming a representative sampling of her critics among scientists. This way, she can provide instances of their being racist or sexist toward her. This is not an all-inclusive list:

Every scientist on this list has been openly critical of Hari, yet I’ve never observed their being racist or sexist toward her. Like many others, I’ve been a target of both of these “isms,” yet I would never deign to slap those labels on people without warrant. To do so is deplorably unethical. These allegations are highly offensive, and I believe that Hari’s detractors deserve to know from where these allegations stem. I can only speak for myself, but if anyone points out any legitimate instance of my being sexist or racist, I will apologize.

In addition to calling her opposition racist and sexist, Hari pulls her oft-played “shill card.” The shill card is a sweeping deflection that is used all too often used in absence of logical refutations to criticism. Rather than call Hari a shill for Food Babe, LLC, or Big Organic, detractors like the ones I’ve listed criticize her work in meaningful ways. Below, a brief statement from one of my prior posts on the problem with the shill accusation:

If any GMO proponent is automatically assumed to be a shill then if we extrapolate, no employee should have the autonomy of mind and freedom of speech to have any thought or belief at odds with her employer. This, my friends, is not the type of society I plan for my children to inherit.

It is about making sure we stand up for the truth no matter what…The information that I am going to share…are meant to help the world, meant to bring a healthier world, and also help reduce the amount of disease rates in this country. What I want to ask my detractors is this: Why do you spend all day attacking me? Why don’t you spend some of your time finding something healthy to bring to the world?

It appears that Hari either has delusions of grandeur, or is being disingenuous as usual. Many of her critics are doctors, scientists, and science communicators. By their very nature, these people’s lives are all about making the world a healthier and better place. Others like me strive to do just what Hari claims to be doing, standing up for the truth no matter what. I spend most of my time keeping my kids healthy, working at a small genomics-related company (and no it’s not Monsanto), and communicating science to a lay audience.

Hari asks her detractors why they “spend all day attacking” her. Reality is vastly unlike her claim in the Alex Jones interview that most of her critics’ work is about her. If you look at the bodies of work of the list of detractors I’ve provided, it’s clear that indeed, most of our work has nothing to do with Hari. Still, her preemptive contention that her critics are somehow obsessed with her is brilliant. This way, whenever anyone tries and refutes her claims, she can pull the “Obsessed with Food Babe” card. Indeed, Vani Hari’s Deck of Deflection keeps growing and growing.

Nevertheless, her non evidence-based fear mongering needs addressing, and this is why we spend our valuable time addressing her blunders. When Hari arbitrarily demonizes beneficial and inherently benign tools like biotech, promotes chemophobia, and conflates consuming conventionally grown foods with eating “processed” junk, she contributes to the hindrance of progress. She contributes to the perpetuation of American scientific illiteracy. She contributes to irrational conspiracy theories.

Now, she’s called a group of hard working writers, scientists, and doctors sexist, racist, shills. Again, I believe these people deserve an explanation of why she continuously makes these allegations. As I’ve borrowed from Carl Sagan countless times – extraordinary claims require extraordinary evidence. Please, show the evidence that those spending their valuable time and energy criticizing your work in the public eye deserve the offensive and serious titles of racists and sexists.

This piece was adapted from: No Food Babe, Your Detractors Aren’t Racists, Sexists, Haters, or Shills