The United Nations has estimated that food production will need to nearly double from 2008 levels by the year 2050 to feed the world’s growing population (nearly all from the least developed nations) and make up for shrinking agricultural land. That means that to boost yields and combat pests, farmers will need to increasingly rely on technology ranging from high-yield seeds to agricultural biotechnology to even the Internet of Things.

While progress is being made, consumers in many wealthy nations are demanding that their food be grown using organic farming principles. At a time when the world cannot falter on the path to increasing its food production, these habits can have severe consequences.

Is organic farming really the most sustainable form of agriculture?

To use land and derivative natural resources as sustainably as possible requires using the least input to produce the most food. So, how does organic farming stack up? 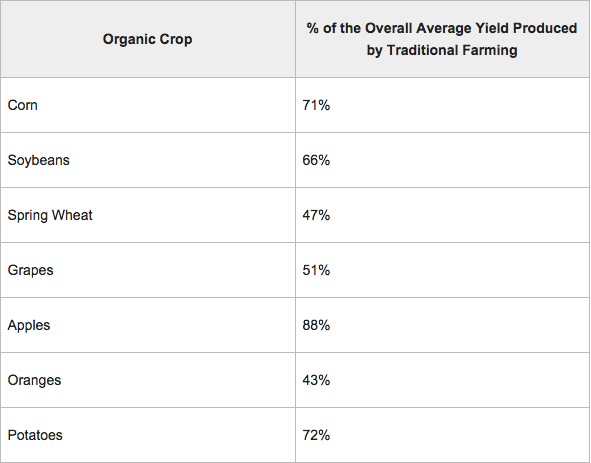 Not so well, according to numbers from the USDA. When the department logged yield data (food produced per acre) from various crops grown organically, government researchers found that they severely underperformed the same crops grown with more traditional farming methods.

Will the world really be better off with organic farming if it requires substantially more land to produce the same amount of food?