Autism: No, it’s not caused by glyphosate or circumcision, but is likely in our genes

David Warmflash | March 23, 2015
This article or excerpt is included in the GLP’s daily curated selection of ideologically diverse news, opinion and analysis of biotechnology innovation.

What causes autism? The causes are endless, and mounting, if the Internet is to believed as a reliable source. It’s variously: vaccines, GMOs, glyphosate, chemicals in our home, fluoride in water, telephone wires, cell phones and even chemtrails left by jet planes. Oh yes…and males should not be circumcised for there is strong links between boys going under the knife and cases of autism.

When it comes to discussing autism, human emotions escalate. Experts are pretty clear on the issue: they don’t really know for sure, but they find very little evidence for any of the above named causes. No matter what the experts say, society is awash with claiming that the experts simply do not know what they’re talking about.

On “The Thinking Moms’ Revolution” blog, for example, one extremely anguished mother of an autistic child basic claims she has had it up to here from “these people”–meaning, the so-called experts who have carefully researched studied the issue and others who cite reports from responsible journalists, explaining that the cause of autism is not what she believes it is:

After a decade of some disappointing and one-sided conversations, I refuse to go toe-to-toe with these people anymore, because they are not going to hear me, and I am not going to hear them. But I would like to go on record with a quick list of how I know it did (in my son’s situation), and does happen. VACCINES CAN CAUSE “AUTISM.” THEY CAUSED MY SON’S “AUTISM.” THEY CAUSED MANY OF MY FRIENDS’ CHILDREN’S “AUTISM.”

Much of the rest of the blog presents “evidence” in the form of observations that she made while working in a pediatrician’s office. Her take home message: embrace my unpublished anecdotes and don’t bother me with expert opinion and peer-reviewed studies. Oh, and she’s not don’t with the finger-pointing. She also takes a swipe at the herbicide glyphosate, often used with herbicide tolerant GMO crops:

Many things can be connected to the declining health of America, but some things stand out: the uptake in vaccines; the uptake in the use of Roundup and GMOs; the uptake in general use of chemicals with no safety data, making vaccines just that much more potentially harmful. All combining to poison our children.

She’s understandably devastated at her child’s challenges, but she’s just plain wrong. Along with purification of the water supply (using “chemicals”) vaccines are the greatest success in public health in all of human history. Nevertheless, it’s easy to understand why a parent of an autistic child would be so upset. When the reason for a condition has not been defined, it’s extremely frustrating and it’s natural to want a clear explanation for what is driving this problem.

In fact, there may be some real environmental factors at play and science may uncover them at some point. However, the current understanding of genetics is beginning to show that the risk of developing autism spectrum disorder (ASD) depends mostly on a child’s genes, not on anything in the environment, nor anything ingested by, injected into, or snipped from the child.

Autism: Is it really on the rise?

The numbers appear to be startling. Consider, for instance, how CNN presented the statistics in a recent article:

It’s important to address the premise that the number of cases is rising. It actually probably is not. CDC data do show the number of ASD diagnoses has increased over the last couple of decades. However, the observed increase has been shown to be the result of a broadening of the diagnostic criteria used by mental health professionals.

Here are some autism causing culprits found on websites that act as water coolers for families with afflicted children:

Vaccine haters: Old news, but still the most famous and dangerous spreaders of mass confusion

Anti-vaxers who blame the rise in ASD diagnoses of the last few decades on the measles-mumps-rubella (MMR) vaccine continue to cite as evidence the notorious, fraudulent Andrew Wakefield study. Several years after it was published in the prestigious British journal, The Lancet, by Wakefield and 11 colleagues, the journal retracted the paper. Wakefield had faked the study. It appears he was conducting research for a group of parents of autistic children planning to sue MMR manufacturing companies, and was poised to benefit financially from the reintroduction of individual vaccines for measles, mumps and rubella.

Unlike the anti-vaxers who cite his study, Wakefield’s position is that that combined MMR vaccine does not prevent measles, but that the individual measles vaccine does. He blames the recent outbreaks in the United States on the use of MMR vaccine instead of the individual measles vaccine. However, the absurdity of Wakefield’s claim has been highlighted by the fact that the outbreaks are occurring among children of wealthy, MMR-rejecting parents, particularly in southern California.

Anti-vaxers have made Wakefield their hero, martyred by the medical establishment. Lashing out at mainstream media in the US and the UK, they claim the media is engaged in a conspiracy to silence the truth tellers, as illustrated in this anti-vax blog:

Even NPR – including Ira Flatow’s “Science Friday” program – has stooped so low as to feature several programs/reports (that I accidentally happened to hear) vilifying Wakefield without allowing him to defend himself!! I suspect that the same one-sided attacks have been on the major networks and FOXNews as well.

Wakefield and those who believe that the increase in the application of vaccine is driving autism cases often site correlation charts, which map one phenomenon against another. Below is a chart popular among Japanese anti-vaccers, It shows that autism rotates rose and fell during the 1990s almost precisely in line with measles vaccination rates. 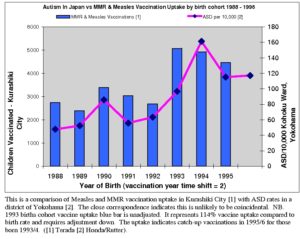 Notice how the purple line graph (representing the rate of ASD cases) goes up along with the blue bar graph (representing number of MMR vaccinations). This looks persuasive. But it’s not science. It’s very easy to put two graphs together, but in science correlation between two things does not mean that one thing caused the other. With the right computer app, you could generate similar correlations between autism various other phenomena that have increased over the years. Let’s look at another one of them.

As with the MMR vaccine, use of this herbicide in corn and soy crops can be plotted and superimposed on a plot of of the increase in ASD diagnoses over the years. This was done by a Ph.D. computer scientist at MIT, Stephanie Seneff, now a hero of the groups that blamed glyphosate –used in tandem with many genetically modified crops, for autism, and it looks like this: 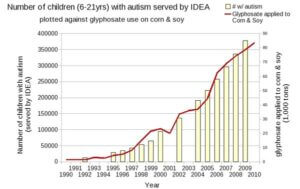 By extrapolating forward in time based on the numbers in the plot, Seneff was able to conclude: “At today’s rate, by 2025, one in two children will be autistic.”

ONE in TWO children will be autistic. That is some major claim, but the conclusion is based on the same fallacy that was mentioned above—the mistaken belief that correlation implies causality. If it did, then ASD would also have to be blamed on other factors that have been increasing over the last several years, and similar extrapolations could be made for increased ASD diagnoses based on projected increases of those factors. A few that come to mind are increases in numbers of smart phones (that’s certain to increase between now and 2025), an increased number of bicycles–or the increase in the consumption of organic foods:

A simple Google search will reveal articles highlighting anecdotes about children who recovered from autism after going gluten free. However, even the anti-gluten website, glutenfree.com, notes that no conclusive evidence exists linking gluten to autism. Some people cite a 2013 study finding a slight elevation in antibodies against one of the gluten proteins in autistic children compared with non-autistic children, but that is hardly evidence of causality. Getting down to the hard science, the only thing that’s certain about gluten is that it’s devastating for people who have celiac disease. In recent years, gluten has been blamed for various syndromes, mostly involving gastrointestinal symptoms, but it turns out that these conditions are caused by other agents, called FODMAPs, present in the food alongside the gluten. All and all, there is no convincing evidence that autism stems from any dietary cause.

Circumcision: Something is rotten in Denmark

In recent years, certain countries in western Europe have become hotbeds of movements against circumcision of male infants. In connection with this, a Danish study looking at more than 340,000 boys circumcised from the early 1990s to the early 2000s revealed a slight association between circumcision and ASD. Over the years, the small but highly vocal anti-circumcision movement has latched onto this study to suggest that the finding means that surgical removal of the foreskin causes the brain to develop in a way that makes the child autistic:

Painful experiences in neonates have been shown in animal and human studies to be associated with long-term alterations in pain perception, a characteristic often encountered among children with ASD… The present study was carried out to address the hypothesis that ASD might be a rare adverse outcome in boys undergoing ritual circumcision during a vulnerable period in life.”

It’s hokum. A policy statement by the American Academy of Pediatrics (which recommends leaving circumcision as a decision of the parents, as it always has been) explains not only what’s wrong with the Danish conclusion, but also address a fundamental precept of science:

“One has to be very careful drawing any conclusions from studies like this…Correlation does not imply or prove causation.”

In other words, the anti-circumcision people have made the same exact mistake with circumcision that Stephanie Seneff has made with glyphosate.

As noted in the opening of this analysis, the blamed causes of ASD is extensive. The list of potential culprits is literally endless and often absurd. Mercury from dental amalgam has been blamed, for example, but as one blogger put it very well, “Where are all the autistic children of dentists?”

Environmental factors being studied for the possibility that they may contribute to ASD include exposure to an anti-seizure drug called valproic acid and another agent called thalidomide during fetal or embryonic life. However, most of the cause is probably genetic. A new study by the Medical Research Council, published in the journal JAMA Psychiatry, has revealed that most cases of ASD-74 to 98 percent—have no environmental cause. Using 516 twins as subjects, the study shows that ASD is almost completely in the genes that you inherit from your parents. That’s it. Not from drugs during pregnancy, MMR vaccines, and not from glyphosate, or circumcision, but pure genetics, for at least 74 percent of cases and possibly a lot more. Additionally, the study shows that not just ASD, but individual autistic features (attributes of autism that many people exhibit without being autistic) also are determined by the same genetic association. That suggests that having a family member with ASD increases the chances of having autistism-like features, which makes sense. After all, genes do have something to do with brain development.