Due out on October 29, The Fear Babe: Shattering Vani Hari’s Glass House, by Marc Draco, Kavin Senapathy, and Mark Alsip, examines the claims and impact of Vani Hari, better known as The Food Babe, a self-proclaimed “food activist” and New York Times bestselling author who abhors biotechnology, thinks sugar is “toxic”, is controversially famous for denouncing Starbucks’ Pumpkin Spice Latte for (gasp) not containing “real pumpkin”, and bullying Subway for using a so-called “yoga mat chemical” in its bread.

The book, with foreword from University of Florida plant scientist Kevin Folta, is a methodical point-by-point refutation of claims by the blogger and her loyal “Food Babe Army”. Vani Hari, the self-styled investigator of what’s “really in your food”, known for the statement,“There is just no acceptable level of any chemical to ingest, ever”, has a tried-and-true formula: Identify a scary-sounding but innocuous food ingredient (like carrageenan) or process, choose a company with household name recognition (such as Starbucks), encourage followers to petition (read: bully) the company and rake in affiliate fees and subscribers to her $17.99 per month food guide.

Whether you’ve wondered about iffy, unscientific claims about food, or need fodder to help assuage the concerns of your well-meaning relatives’ food fears, look no further. This book is a systematic, science-based, entertaining debunking of myriad popular myths about food, using the all-too-popular Food Babe’s claims as a basis to teach the reader critical thinking.

Covering issues from preservatives to pesticides, Stevia to celiac disease, and beaver butt flavoring to BHT, the book is a reference on some of the most popular food fads, frights and myths of our time. While The Fear Babe discusses Vani Hari extensively, the authors also examine other popular misinformation vectors, including Jenny McCarthy, Andrew Wakefield, Joe Mercola, Gary Ruskin, Mike Adams, and Gilles-Eric Séralini.

What follows is an excerpt from chapter 5, “Fear and Loathing of GMOs”:

“The great GMO debate rages on. In this chapter we’re going to look at what GMO is and what it’s not. As of publication, none of the writing team work for any corporation developing GMOs for market. This book was inspired entirely in response to Food Babe’s quest to make money by terrifying an already misinformed and fearful public.

A GMO, short for Genetically Modified Organism, is a living thing that has been modified slightly to give it an improved feature or function that already occurs in nature. Often the trait comes from a related organism.

Genetic modification occurs when genes, viruses, or bacteria from one organism are artificially injected into a fruit or vegetable in a process that occurs in a laboratory and not in nature. 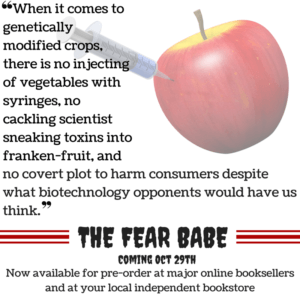 While an awful number of people believe this to be the case, the idea that something is injected into a plant or animal with some kind of hypodermic syringe is utterly preposterous. Opinions differ as to whether a virus is a living thing or not because it consists primarily of DNA or RNA, but is itself made up of genes. Viruses are special because they live inside other organisms, including bacteria. Regardless of the technical description, this isn’t how genetic modification, which is achieved by a number of methods, is performed. It’s just plain wrong. Injecting a live virus or similar pathogen willy-nilly into another living organism is likely to make it sick and die: assuming it has any effect at all.

Genetic modification is done to make a fruit or vegetable more hardy or impervious to the application specific pesticide. These pesticides are linked to myriad diseases.

That’s partly true at least, except the part about pesticides and disease. It’s true that pesticides may cause ill health at very high doses because they are, by nature, toxic, but this has nothing to do with GM technology. Crucially, the amount of pesticide residue consumers are exposed to is far too low to cause harm.

We have a right to know what’s in our food just like people in countries like China and Russia do–especially when studies have linked GMOs to a wide variety of diseases like infertility and cancer.

Gee. That sounds bad and such studies do exist. But just because someone writes a paper doesn’t necessarily make it true. Scientists work outside of their field, experiments are badly designed, and rarely, people flat out lie.

Take, for example, her claim that GMOs are linked to infertility. We believe that she’s referring to a study linking glyphosate to male infertility, though the link is weak if not non-existent. “Roundup: The sneaky and cheap contraceptive hiding in your food”, a 2013 headline from Natural News declared about the study. Then again, Natural News is infamous for fudging science at best, and at worst, actually making stuff up.

The study in question was an in vitro rat study, and its conclusions in no way demonstrate that glyphosate in our food causes infertility. The results showed that “acute Roundup exposure at low doses (36 ppm, 0.036 g/L) for 30 min induces oxidative stress and activates multiple stress-response pathways leading to Sertoli cell death in prepubertal rat testis.”

Crucially, the study wasn’t done on live rats, it was done on rat testicular cells in culture. And the most important part? 36 ppm (parts per million) is way higher than the typical residues found on crops, around one ppm. Suffice it to say, don’t pour Roundup on your genitalia guys, though even that would be unlikely to render you infertile. If you want sterility, stick with a vasectomy. And ladies, keep your IUDs, pills, implants, and other birth control.

No matter how you look at this, we know that every living thing on the planet contains a unique blueprint called genes. Genes are essentially instructions that tell the organism how to build itself into a complete, working offspring of its parent(s). Be it plant, animal or fungus, we all have genes.”

The “Fear Babe”, which the authors hope will arm readers with a misinformation radar, and the ability to smell BS from a mile away, is currently available for pre-order at major online booksellers and from your local independent bookstore.

Kavin Senapathy is a freelance writer and co-author of The Fear Babe: Shattering Vani Hari’s Glass House, due out October 29th and now available for pre-order. The science advocate and co-founder of March Against Myths’, her interests span the human and agricultural genomics and biotechnology realms.  Follow Kavin on her science advocacy Facebook page, and Twitter @ksenapathy