Talking directly to members of the Ugandan Parliament and several farmers who continue to suffer the burden of banana bacterial wilt, Uganda’s president challenged members who had doubts about biotechnology to be more forward thinking.

“Biotechnology is to impart certain qualities. Legislators who are against it should modernize their thinking.” was the message from Uganda’s President, His Excellency General Yoweri Kaguta Museveni during the celebration of this year’s World Food day.

Many Ugandan farmers say they are hopeful that the government will approve a resistant transgenic variety blocked because the country lacks a biosafety law that would enable them access it.

World Food day is an annual celebration that marks the day when Food for Agricultural Organization of the United Nations was established. In Uganda the celebration takes place in one of the countries several Agricultural research facilities. The 33rd annual celebration ended up being a rally for science and scientists. Uganda’s president boasted of having trained scientists who are capable of doing anything and everything. He was joined by several agricultural scientists working on various projects aimed at using biotechnology to improve major crops, including banana, cassava, rice, corn, millet, sweet potato and potato.

Uganda’s president, 71, one of the Africa’s longest serving leaders, is supposed to be a conservative with a Mugabe like restraint, but Museveni knows that only science not radical sentiments can help fight hunger and poverty, and transform his country into a prosperous nation. His message should help push sometimes reluctant policymakers and legislators who appear trapped in the web of precautionary conspiracies. He said scientists need to be paid well and better than others because of their unique training and efforts. Museveni, who fought a guerrilla war to dislodge Uganda’s brutal dictator Idi Amin, told the gathering that during their war days they would ensure a guard ate enough food even when others did not have much to eat. He likens his guerrilla comrades to modern day scientists, who utilize their professional skills and knowledge to ensure the entire nation is food secure. 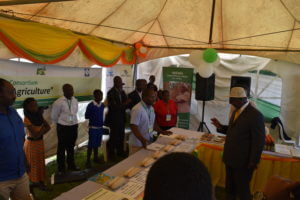 In Uganda, most legislators are still on the fence–undecided about whether to support GMO crops. The president told farmers and those who were present at the celebration that biotechnology is being frustrated by some ministers from smaller villages. Museveni asked a question: What is wrong with farmers accessing a drought tolerant maize variety? Scientists noted that farmers, even in conditions of drought, could still get some harvest when the conventional varieties would have completely failed.

The anti-GMO activists, who get their scare-mongering cash from Europe where maize is used mostly for feeding animals say, try to create a fear of the unknown. They say that 20 years from now we may discover that the maize was not safe. But there is no science behind that claim. It seems that to the activists, it is better to die now of famine rather than risk a danger many years in the future that science says will almost certainly never happen. It is unfortunate anti-GMO activists would rather have African farm families die of poverty because their crops, which are major sources of food and livelihood, are being wiped out by diseases caused by climate change — which is mostly created by the very developed countries fighting the technology that would help rescue them from nature’s harshness.

Will the President’s word help neighboring Kenya and Tanzania?

Recently, Vice President William Ruto of Kenya announced that the country’s ban on GMO imports would be lifted. The antis organized and ran a social media campaign to attack Ruto politically using the hash tag “#someone tell Ruto”. Kenya, however, went ahead and issued a public notice that it would commercialize insect resistant corn. As expected the GMO critics responded by going to court to try to delay the process. In Tanzania, after their ministers came to Uganda and visited various GMO trial sites, they returned home and amended the biosafety law, which was so prohibitive. With several regional leaders, old and young, conservative and liberal, coming out in support of biotechnology even at the risk of a political backlash (Uganda is going to the polls in four months) shows how real the potential of biotechnology is to addressing food security in the face of increasing climate change variabilities.

Could this be the nail in the Uganda’s anti GMO activists’ coffin?

Here in Uganda, various members of parliament have endorsed moving forward with the approvals of various GM crops. The biosafety bill was on the verge of being enacted. But the antis mounted a campaign to try to scare some politicians into believing that they would lose votes from farmers if they passed the law. That caused a deadlock. This timely message from the president whose party has a majority in parliament will go miles into encouraging Uganda’s policymakers to vote in favor of the bill.

It is true the activists will continue to scare and try to manipulate people in part because their European supporters continue to look aside even when they mount scare campaigns. ActionAid UK has attempted to reign in their counterpart in Uganda, which had been actively spreading “illiterate lies”. It is unfortunate that in cases of scientific forgery and trickery, the poor farmers who are losing their crops to pests, disease and drought pay the ultimate price: hunger.

Isaac Ongu is an agriculturist, science writer and an advocate for science based interventions in solving agricultural challenges in developing countries. Follow Isaac on twitter @onguisaac.