. . [A]nti-GMO alarmist Nassim Taleb withdrew from the debate with me over GMO crops . . . The debate was arranged by the Journal of Markets and Morality and Taleb backed out after he received and read my initial essay on the subject. Since that essay had been largely written in response to his red-herring-filled working paper, “The Precautionary Principle (with Application to the Genetic Modification of Organisms,” I decided to go ahead and publish my debate essay anyway at Reason.

With his characteristic intellectual generosity Taleb responded with a tweet linking to a letter that he has apparently now emailed to the editor of the journal. Tweet: The reason we decided not to respond to this idiot.

This idiot is, of course, me. Anyway the tweet and letter is below. 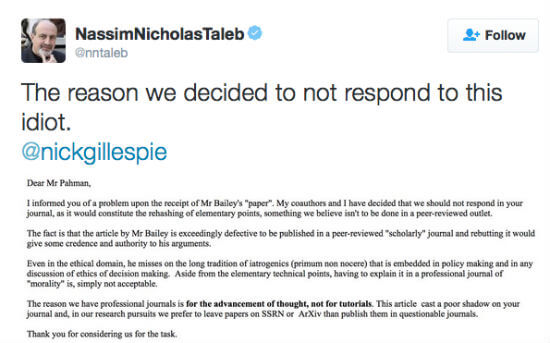 Just a few observations about Taleb’s letter. To the extent that elementary points were “rehashed” in my essay that was necessary because Taleb and his colleagues in their poorly done “working paper” had made such an elementary hash out of both the science and relevant policy arguments with respect to the safety of modern biotech crops. . . .

. . .Taleb and his colleagues provide no evidence whatsoever in their working paper that current versions of biotech crops might cause global ecocide or human extinction. They assume ruin and then crank through some equations that they evidently believe proves the truth of what is ultimately just a tautology.

Final weeks to approval: NIH’s Anthony Fauci and FDA’s Peter Marks on what’s ahead before we can expect a safe COVID vaccine

5 recommendations on cutting through the COVID social media ‘infodemic’

Slideshow: Canine COVID detectors soon may be coming to an airport or business near you

As humans grapple with pandemic-induced isolation, science is starting to offer insight into what may be happening in our brains when ...