Arthur Doucette | February 29, 2016
This article or excerpt is included in the GLP’s daily curated selection of ideologically diverse news, opinion and analysis of biotechnology innovation.

Monarch butterflies are continuing their comeback, according to the latest data released by the United States Fish and Wildlife Service:

Numbers reflect a 255% increase in the area occupied by monarchs in the overwintering habitat since last year. Overwintering monarch butterflies occupied approximately 10 acres of habitat in Mexico this year compared to last year’s estimate of 2.8 acres.

While the report also notes that there remains still work to be done to aid these pollinators, the returning numbers conflict with the crisis narrative emanating from many environmental NGOs. There is a prevailing viewpoint among some anti-GMO and anti-chemical  groups that the herbicide glyphosate, a low toxic herbicide widely used to control weeds on farm fields is responsible for the decline of these important pollinators. Some genetically modified crops are designed to be paired with glyphosate because of its low toxicity profile and biodegrades so readily.

Last year, the National Resources Defense Council (NRDC) sued the Environmental Protection Agency claiming it was “dragging its feet on efforts to 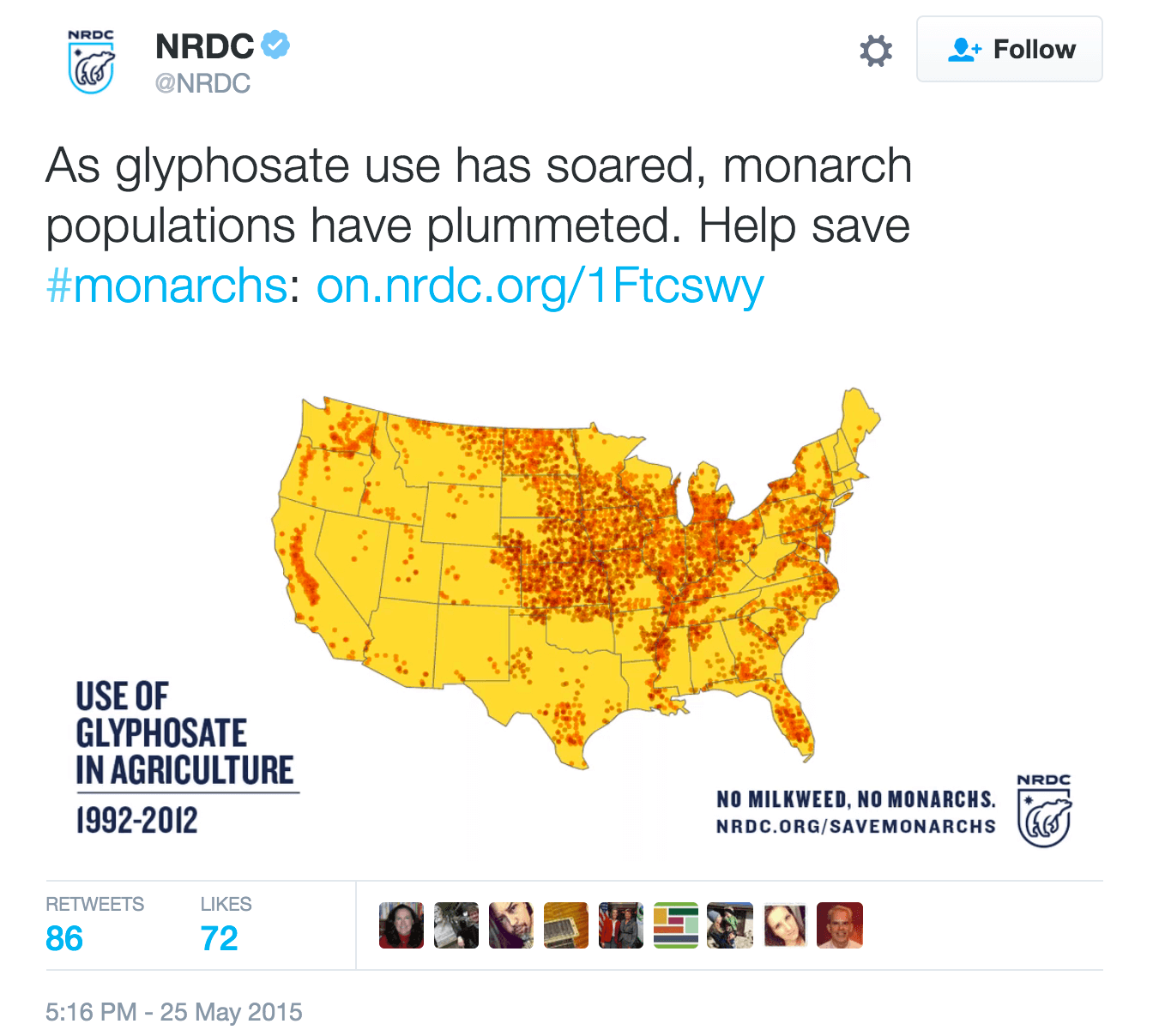 save the imperiled monarch.” It added: “EPA’s failure to respond to an urgent petition the taught to limi the use of a pesticide that’s being destroying the monarch habitat.” Milkweed is a key food source for the monarch’s caterpillars.

It now acknowledges that there has been a sharp rebound in monarch numbers for two years in a row, even as the use of glyphosate continues to rise. But even in the face to two year’s of dramatically improving news, NRDC issued yet another scare warning. It claimed the improved population was due mostly to improving climate patterns–after denying for years that adverse climate conditions were the main driver of monarch declines. And it took another swipe at glyphosate, writing, “We need to continue to scale back the use of pesticides that are eliminating milkweed.” Pesticides are widely used by both organic and conventional farmers.

This latest yearly count of monarch butterflies in their over-wintering site in Mexico shows an even larger increase following a rebound in 2014. This recent count shows a dramatic increase in their numbers, which represents a reversal in their recent sharp declines. Scientists with World Wildlife Mexico estimate that the area they occupied increased by 255 percent over last year, and 600 percent over 2013. At about 50 million per hectare, that’s over 200 million butterflies that made the long perilous trek back to Mexico. There are other, additional populations that winter in Florida and in California.

Counts have existed back to the 70s, but it wasn’t until 1993 that a standardized method and time of measure was instituted. While other graphs exist they often leave off early years, this one demonstrates the clearest picture from Overwintering monarchs 1993-2015:

With this additional data we can see that in 1993, many years prior to the first use of glyphosate, the population of over-wintering monarchs was but 6 hectares. So after 2 decades of use of  the herbicide being used in conjunction with herbicide tolerant (HT) crops, and its use on over 100 million acres of our cropland for a decade, the over-wintering area is a quite respectable 4 hectares particularly when considering the impact of loss of forest on their ability to survive the winter in Mexico. Indeed last year was better than 6 of the previously recorded years and better than a decade ago when glyphosate use was on roughly half as many acres as it was last year.

This graph shows the adoption of HT crops in relationship to the overwintering numbers, from 1993 to 2015: 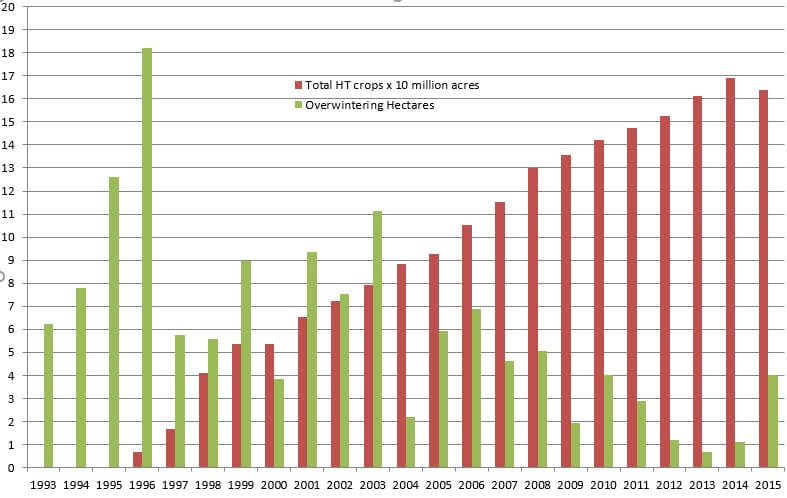 The first year that GE crops resistant to glyphosate were planted was in the spring of 1996, and so that first year we used Herbicide Tolerant (HT) crops was also the year that had the highest returning number of monarchs since standardized record keeping was instituted, or “96-97”. Of course the amount of HT was relatively low that year.

The most obvious conclusion though is that the huge drop in 1997 had nothing to do with the tiny amount of acres sprayed that year, which is less than 1 percent of what we now spray. Indeed, this shows that other factors had to be responsible for the year to year drop in population by over 300 percent since by 2003 we sprayed twice as many acres as 1997 and yet the over-wintering population was also twice as high.

One thing that helps to understand is the loose relationship between the overwintering number and the number of monarchs that return the following year. To start with, the census is taken at the end of December/early January, but this is several months after they have arrived and several months before they begin their return to North America. Early winter storms can kill many of the butterflies prior to the census, and late winter storms can kill many of the butterflies after the census. The Informally Constituted Monarch Butterfly Scientific Advisory Committee (ICMBSAC) noted in a 2005 report why this is time is not ideal:

The size of the spring migration, however, will be determined both by the size of the migration the previous fall and by the number of butterflies that survive the winter. Storm mortality varies widely from year to year, and when it occurs, it is usually later in the winter…

The relatively large 2001-02 overwintering population, for example, was estimated to have suffered approximately 80% mortality during and immediately following a severe storm on 12-16 January 2002 (Brower et al., 2004). In 1980-81 the most prolonged storm on record lasted from 12 to 23 January and killed an estimated 42% of the butterflies (Calvert et al., 1983).

While it’s true that the area of habitation hit a very low number in 2013, the amount of glyphosate used remains the same and yet the recovery from that low has been pronounced suggesting that that very low number was based on many of the other variables.

Indeed, in press there are clear cautions about the factors that are expected to curtail their ability to survive in Mexico over the winter. A report of monarch numbers in the 1990s published in the journal Conservation Practices found that the greatest threat to monarch numbers was habitat loss from accelerated deforestation of their ecosystem.

Another key issue: The final generation of monarchs born in the US are the ones that migrate back to Mexico, and do so over great distances, since by then they have crossed the Great Lakes as the successive generations moved north over the summer. The ability of adult monarch butterflies to obtain nectar from wildflowers during the fall migration is critical to their building up sufficient lipid reserves to survive the winter and remigrate back into the United States the following spring.

And considering the expanding U.S. population, that’s becoming an issue. But its not an issue that has to do with milk weed, because the South bound monarchs need nectar, not something to lay their eggs on, and it is these nectar sources that are probably most critical to the size of the returning monarch population. This was best described in Conserving Migratory Pollinators and Nectar Corridors in Western North America by Gary Paul Nabhan:

A significant portion of monarchs that arrive in Mexico lack sufficient lipids to survive the winter. Brower, O’Neil, and Missrie (unpublished data) have found that virtually all monarchs attempting to nectar on species of Seneccio and Lupinus in the Sierra Chincua area are in fact starving with no chance of obtaining significant sugar on the desiccated and grossly depleted flowers near the overwintering colonies… However after the monarchs leave the overwintering sites, nectars are probably again critical. In fact, extensive nectar-drinking during the spring migration in Mexico has been reported by Heitzman (1962).

Even with all these other issues affecting the decline, don’t expect that NGOs that oppose genetic engineering and glyphosate to relent in their attacks. In February 2015, even as the butterfly was recovering, the NRDC filed the suit against the EPA part of its multi-year effort to demonize glyphosate:

“The longer EPA delays [taking action against glyphosate], the greater the risk we could lose the monarch migration,” Sylvia Fallon, an NRDC senior scientist and director of its Wildlife Conservation Project. … Experts say the primary cause for the population collapse is the skyrocketing use of the herbicide glyphosate (originally marketed as Roundup) on genetically modified corn and soybeans, which has wiped out much of the milkweed — a native wildflower — that monarchs need to survive. Since EPA last reviewed the safety of glyphosate in 1993, its use has increased ten-fold, yet the agency has never considered the herbicide’s impact on monarchs.

The EPA considered the petition last June and denied it, writing, ”

EPA concludes that its ongoing efforts to protect bees, in conjunction now with this effort to protect the monarch butterfly, are in line with the objectives of the NRDC petition.

The NRDC is now claiming that the credit for the increase in monarch goes to–itself and its volunteer’s:

…but certainly part of the increase can also be attributed to the efforts of many people to plant additional milkweed habitat across the US including hundreds of NRDC members who have helped plant tens of thousands of milkweed plants along the migration route.

But the current rebound of monarch numbers highlight the fact that that glyphosate is the not the reason why these butterflies are appear to be dying off. The most likely cause of ongoing challenges are logging in their winter home, the changing climate and the spreading suburbanization in major habitat regions.

In the first years on the monarch butterflies graph there was 259 million people living in the US. Today there are 64 million more people. While monarchs and glyphosate on farmland can get along, the bigger issue is can we and monarchs?

Efforts like the Monarch Joint Venture and Monarch Highway, which focus on helping maintain these organisms’ habitat, along with help from the Mexican authorities to prevent logging in the over-wintering areas, suggest it can be done without taking away from farmers a key method of weed control.