…replenish the earth and subdue it and have dominion over the fish of the seas and over the birds of the air and over every living thing that moves on the earth…Genesis 1:28

The anti-biotechnology group Moms Across America (MAA) is not shy about their objections to  biotechnology: Its website is filled with links to refuted studies (like those by Gilles-Éric Séralini) that claim health risks of GMOs and it is very active on social media calling for GMO labels.

But by erroneously invoking sacred religious text have they gone too far in its mission to block the acceptance of GMOs? 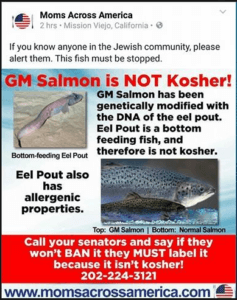 This past December, in an attempt to get its followers to call Congress, MAA shared a graphic regarding the AquAdvantage transgenic salmon. MAA’s claim was that this salmon should be banned for consumption or labeled as a GMO based on its non-kosher status. It was basing this assumption on the fact that the salmon contains DNA from an eel pout, which is a bottom feeder.

Coming from a Jewish family, I immediately questioned the accuracy of that allegation. A friend of mine who once served as a mashgiach (kosher supervisor) was also quite upset about this claim. “According to Jewish law, fish with fins and scales (like salmon) are kosher,” he explained, “because the AquAdvantage salmon has fins and scales it is kosher.”

Almost as upset as my mom is when someone insults her brisket, ‘my people’ descended on the Moms Across America Facebook page in rage. To MAA’s credit, it did delete the offensive graphic and issued a partial apology. And to our credit, we thanked them. Never before, and probably never again, will you see that many fans of biotechnology thank the primitive food movement. There are a lot of Jews in the skeptic community (unfortunately Bernie Sanders missed that meeting), and we love to argue but we assumed after the apology that this argument was over.

Unfortunately, Zen Honeycutt (who is the founder and director of MAA) did not bother to learn her lesson. She is at it again with a recent article for EcoWatch titled “7 Reasons Why the U.S. Government Must Label GMOs.”  In this article, her seventh reason is stated as:

Religious sanctifications include that followers know if they are eating certain animals and avoid them.

With mandatory GMO labeling stricken down by Senators, in the future, Jewish people for example, would not know if fish, fruit or vegetables were genetically engineered with species which are not kosher. This is tantamount to a violation of their religious freedom.

But this is not just about eel genes in salmon. If MAA had actually read Jewish law, it would have realized that the Jewish faith and its sacred texts not only allow the consumption of GMO foods, it endorses it.

So how does Rabbi Wollf’s article address Honeycutt’s claim that adding a gene from a non-kosher animal to a kosher species make the result non-kosher? Jewish law is very clear that all plants are considered kosher. The addition of genes from an animal placed into a plant does not stop it from being a plant. Chief Sephardic Rabbi, Eliyahu Bakshi-Doron, and other religious authorities have also stated that genes are not food, therefore not classified as kosher or non-kosher. This point is currently moot as no transgenic plants currently on the market contain genes from animals, though scientists have experimented with fish genes for frost resistance.

In some ways genetic engineering is even more kosher than traditional breeding. For Jews the interbreeding of two species is forbidden under Jewish law. There is, however, no law stating that Jews cannot receive the benefit of interbreeding and consume a pluot (the result of crossing plums and apricots) or ride a mule. This law actually only relates to the physical act of sex, which does not occur when genetic engineering takes place between different species.

Even if Jewish law forbade genetic engineering, it would still not be an argument against the genetic engineering of crops or for arbitrary mandatory breeding labels. If a new product came out that was non-kosher, it would simply not receive the voluntary kosher label. The United States constitution creates a separation between church and state, meaning religion should not be part of the conversation regarding mandatory labels. With voluntary kosher labels, Jews do not feel the need to March Against Smithfield because pork would not have a kosher label. Organic and non-GMO labels already exist to serve the dietary restrictions of Honeycutt’s movement. For those Jewish families that do happen to follow her lead, there is a Kosher Organic label. In the end, non-Jewish organizations should not be considered experts on Jewish law just to further their own agenda.

In the end it comes down to this: What right does Moms Across America have to call for the mandatory GMO labels in the name of Judaism, when the Jews themselves are not calling for it?

Stephan Neidenbach is a middle school teacher living in Annapolis, MD. He holds a BS in business administration from Salisbury University and a MS in Instructional Technology from University of Maryland University College. He started and runs the Facebook page We Love GMOs and Vaccines, follow him on twitter @welovegv.