The story behind Séralini’s disappearing GMOs-are-toxic study, and the journal that published it

Where did the latest Séralini anti-GMO paper go?

In a bizarre twist involving the French scientist whose controversial studies are the bedrock of the anti-GMO movement, Gilles-Éric Séralini told Retraction Watch that he has no idea.

Gilles-Éric Séralini newest attack on GMOs, this one purporting to show that a type of genetically modified corn once used in livestock feed can be toxic, has disappeared from the web. Séralini and his research group, Criigen — Committee for Independent Research and Information on Genetic Engineering — held a news conference on January 26 announcing:

… new scientific data on Bt toxins and a thorough study of the records show that this GMO Bt maize is most probably toxic over the long term.

Co-authored with Gottfried Glöckner, a German dairy farmer involved in the experimental testing of the corn known at Bt176 (developed by Novartis, now Syngenta) during the 1990s, the article appeared in the Scholarly Journal of Agricultural Sciences (SJAS). Never heard of it? It’s an obscure journal — or was a journal until it disappeared one day after the Séralini paper was published. Based in Nigeria, it was known as an ‘open access’ predatory journal because it its business model was to print controversial, often low quality articles–but only after the authors paid high fees, supposedly to cover editorial services and professional review. They often prey on scientists who are desperate to add publications to their resume, or scientists, like Séralini who cannot get their work published any more in serious, scholarly publications.

Considering Séralini‘s tainted reputation — he has published numerous controversial articles claiming that GMO foods are dangerous that have been widely discredited by regulatory oversight agencies — the mainstream press ignored the event. Two members of the European Parliament spoke out in support of the study. Michèle Rivasi, of France, an environmentalist MEP and member of the Environment and Health Committee in the European Parliament noted the study was proof the precautionary principle should dictate GMO policy. Carey Gillam, the former Reuters reporter renowned for her anti-GMO reporting — after being separated from the global news service, she took a job as “research director” at the anti-GMO organic industry funded U.S. Right to Know, tweeted her admiration for Séralini’s perseverance in informing the public about the ‘dangers’ of GMOs: 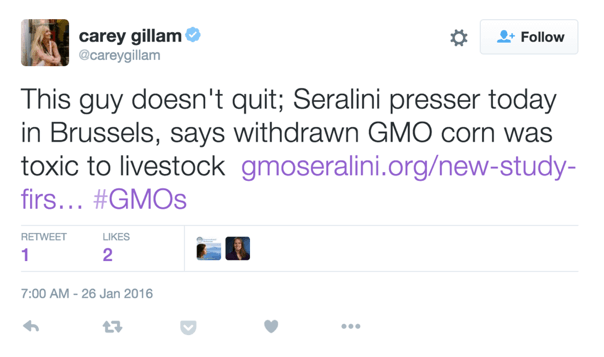 The article was gaining some traction in anti-GMO community when the day after it’s release, poof, it disappeared from the web. Readers who click on the link for the article here go to an empty page, with a note saying that the domain expired on January 27.

The anti-biotech website GMWatch, which is run by the same people who oversee Seralini’s propaganda site, GMOSeralini, continues to hype the article. According to GMWatch, the journal also published a commentary by Seralini, which detailed Glöckner’s expertise in this area, but the link to goes to the expired site. This was recovered from wayback machine, and posted on Retraction Watch:

When German farmer Gottfried Glöckner began feeding his cows on GM Bt176 maize in 1998, he noticed strange symptoms appearing in the animals. They included partial paralysis (paresis), accompanied by severe fatigue and problems in the kidneys and mucous membranes, followed by death in 10% of cases.

Initially the culprit was thought to be a bacterial or viral disease. Analyses were conducted, including some by university laboratories, in collaboration with the German Ministry of Health and the GM maize developer company, Syngenta (then Novartis). But the investigations drew a blank.

By 2002 the proportion of GM Bt maize in the diet, which had been progressively introduced, had reached 40%. Glöckner had become convinced that Bt maize was the cause of the diseases in his cows. He sued Syngenta and was awarded partial compensation for his losses. But he subsequently suffered legal and personal setbacks, as reported in a commentary newly published by Prof Gilles-Eric Séralini in the the peer-reviewed Scholarly Journal of Agricultural Sciences (SJAS) (Séralini GE,The experience of one of the first GM crop farmers in Europe, SJAS 2016).

After the court cases ended, Prof Séralini gained access to the veterinary records and to detailed archived data for each cow, as well as to the testimony of the farmer, who holds a Master’s degree in Agricultural Sciences.

In the 1990’s, Gottfried Glöckner and his wife owned a farm in Weidenhof, Wölfersheim, Hessen, Germany. The couple grew conventional crops like corn and raised livestock. When GMOs began to be available for farmers in the mid 1990’s, Glöckner was initially very intrigued by this new technology. He told The Ecologist in 2014:

Since 1995 when genetically modified Roundup-Ready (RR) Soy was imported into the EU, approved under the principle of ‘substantial equivalence,’ I had been interested in the subject GMO technology in plants. When in 1997 the EU approved the commercial sale of Syngenta GMO corn (Syngenta Bt176) I decided, as a farmer interested in new better technologies, to grow Syngenta’s Bt176 on my land.

By 2002, 40 percent of the feed he was giving his cows was derived from Syngenta’s Bt176 maize — a GMO corn that possesses the gene for a bacterial toxin that is also an organic bt insecticide. Yet around this time, Glöckner started to become worried about the safety of these crops. In 2001, a few of his cows became lethargic, weak, and had reduced milk yield. That year, five of his 66 cows died. A similar scenario played out in 2002 and seven dead cows. After conducting his own investigation, Glöckner concluded that the culprit for the death of his cows was the bt corn. The incident turned into a large news event in Germany and regulatory agencies were called to investigate.

In the 15 years since the incident, Glöckner fought a long legal battle with Syngenta and was incarcerated for violence against his wife. Now that the legal battles are over the the data and veterinarian record were finally released and Séralini was able to get a hold of it and decided to publish the data.

How did these cows die?

Many critics of the paper have pointed out the confusing nature of the opening statement of the paper in which the authors admit, “This study was not designed as a scientific experiment.” The phrase is also repeated in the paper’s abstract. Yet despite this self-characterization as not science, it has been promoted as a scientific evidence against the safety of GMOs.

Yet, putting aside some of the quirks of this paper and the journal, there is still a legitimate question of what happened to these cows. Prof. Dr. Klaus-Dieter Jany, who was the head of the Molecular Biology Centre of the Federal Research Centre for Nutrition and Food in Germany from 1998-2008 and was asked at the time by the Ministry of Agriculture for an assessment, investigated the farm and the cows shortly after the tragedy.

In his expert opinion, the evidence for the cause of the cow’s deaths was most likely attributed to one of a few factors which all revolve around Glöckner’s use of inappropriate feeding practices. Jany says the farm was using, “inappropriate power feed and a wrong feed composition to increase the milk yield in a short time.” Furthermore, he notes that they found Glöckner was using, “inadequate and unsanitary corn silage with many undesired contaminations (plastics and dead rats) of the corn silage.” Finally, Jany says botulism also couldn’t be ruled out as at least a potential cause for at least some of the deaths.

Jany’s explanation is also consistent with the vast majority of research into the the affects of GMOs in the feed of animals. Most notably, a large one from 2015 published in Journal of Animal Science which used data from 100 billion animals and found no health dangers to the animals from GMOs. But large data sets might not be needed to conclude that GMOs in animal feed are safe safe. Today, almost all of livestock feed today is derived from GMOs, and if they weren’t safe to consume Séralini wouldn’t need to go looking for the one farmer who lost 12 cows.

Séralini had apparently hoped that this new “study” would stir the embers of concern around GMO food safety. The Criigen news release:

This study reveals once again the urgent need for specific labelling of the identity and quantity of GMOs, especially in food and feed. Long-term testing of GM food and the pesticides they are designed to contain must be carried out and made public. This is now more essential than ever.

In fact, this study reveals only one thing: it’s critical that research on biotechnology, food and farming practices be carried out by credible researchers publishing in top tier journals reviewed by respected independent international science agencies. That leaves Séralini on the sidelines.

For those who got COVID-19, immunity could last for the rest of your life

Vaccine disinformation and conspiracy theories run wild in California among Mexican farm workers. Here’s what’s being done to address that