Celebrity chefs were toasting and boasting last week about the U.S. Senate’s failure to pass a voluntary GMO labeling bill. Led by Top Chef judge, restaurateur and ‘cheftavist’ Tom Colicchio, they’ve rallied around the cause of forcing all food companies to label GMOs on their products. On March 16, a bill that would disallow state laws and make the labeling standard optional instead of mandatory stalled in the Senate. The chefs tossed their toques in the air in celebration. Colicchio:

Today’s vote marked an important milestone for the more than 90 percent of Americans who want GMOs to be labeled. … I am hopeful that the Senate will now work to craft a bipartisan mandatory on-pack GMO labeling bill that doesn’t demonize science and gives consumers the information they demand.

Foes of the bill nicknamed it The DARK Act — Deny Americans the Right to Know. Colicchio had gathered signatures from more than 4,000 chefs on a petition delivered to Capitol Hill in advance of the vote: “We, the undersigned chefs, have a fundamental right to know what’s in the food we cook and serve our customers.” Other well known chefs like Jose Andres and Art Smith joined the movement under the banner of a consumer’s “right to know”. Which got me thinking….

How do these celebrity chefs label the food in their upscale restaurants?

I would expect such staunch defenders of transparency and consumer’s rights to give their own customers all kinds of information about what they’re eating. The right to know should extend beyond some meaningless GMO label, right?

Well, not so much.

Let’s start with Colicchio. He owns pricey restaurants on both coasts and in Las Vegas. At Craft, his signature restaurant, you can order anything from a $60 roasted Dover sole to a $16 side of cauliflower (keep in mind this is a millionaire who’s quick to pull the “shill” card on anyone who disagrees with him, implying they’re making money off GMO advocacy. He once tweeted me to “keep drinking Round-Up”).

Colicchio’s menus are among the least informative I’ve ever seen, although this lack of disclosure is not uncommon for high-end restaurants. The Craft menus simply list the main ingredient for each dish. There is no information about preparation, sauces or additional ingredients. The only label is the eye-popping price.

So let’s say you are a customer who does not want to be kept in the dark about what’s in your food at Craft. You’d like to know the calorie count, fat grams and sodium content of the $45 flat iron steak you are about to order for health or dietary reasons. Sorry, Mr. Colicchio’s menu denies you the right to know. A DARK menu? Colicchio has admitted that he doesn’t label GMO items on his menus (this would at minimum require the labeling of hard cheeses, many beers and soft drinks served at the bar).

He’s not alone in these practices. Jose Andres, a Spanish-born chef and restaurateur, owns several tapas-style restaurants in the DC area, Miami, Los Angeles and Las Vegas. Although he just became a U.S. citizen three years ago, he’s wasted no time jumping into American politics and policy: “José is also known for championing the role of chefs in the national debate on food policy,” according to his website.

Andres isn’t just pro-labeling, he opposes GMOs altogether. Andres has said that “if he knew that certain products contained ingredients developed from genetically engineered crops, he would not use them. “Transparency is all we are asking for.”

So what kind of transparency does Chef Andres furnish on his menus? Nada. Aside from the general ingredients in each dish, you won’t find anything else. No calorie count, sugar, sodium, fat or genetically engineered ingredients for that matter. No information about where or how the food was sourced. Andres also has a shop on his website where you can buy lots of stuff with his name on it. There are no GMO or non-GMO labels on any products.

The chef gets a little touchy when you raise this issue. I do not follow Andres on Twitter, but he trolled me last week as I was tweeting out the compelling (not) debate on the Senate floor about the labeling bill. Out of nowhere, the chef replied to one of my tweets and tagged Colicchio:

Of course. The shill card (Colicchio taught him well). 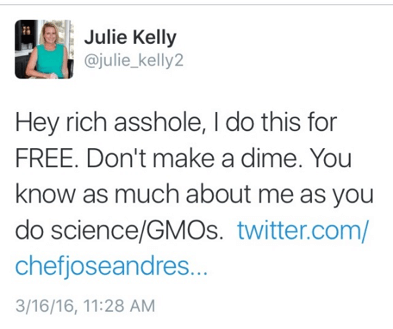 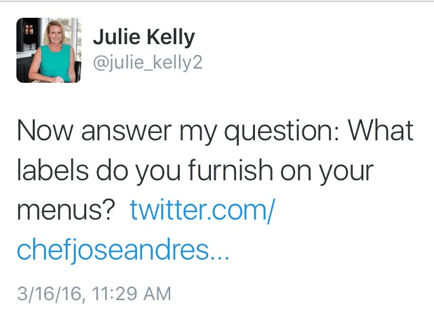 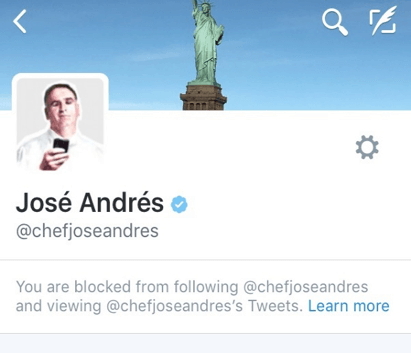 So much for transparency.

Another well-known labeling advocate, Mark Bittman, came clean last week about labels at his new vegan meal kit company, The Purple Carrot. Bittman is chronicling his transition from writing about food to selling food in a series of articles on Fastcompany.com.

Bittman often used his New York Times column (which he stopped writing last year) as a platform to demand stringent, detailed food labels. In 2012, Bittman directly called for GMO labels, claiming “I want to know — quite technically, in all the detail available — how my food is produced.” He kept up the GMO labeling drumbeat in subsequent columns.

All the details? Apparently only when it applies to others. The columnist who once suggested a 15-point scale stoplight label on all food packages now opposes providing basic nutritional information in Purple Carrot meal kits. You can’t be all things to all people, he shrugged, writing the ‘right to know’ was, well, an annoying encumbrance:

At the end of the day, you don’t really need to know more. This isn’t about withholding information; it’s about making things simpler. We should be telling our customers, “this food is good for you; if you want more information than that, you’ll find it on our website.”

The GMO labeling debate is far from over. The bill that stalled last week will arise to fight another day. Vermont’s law is set to take effect in July but its being challenged in court and lawsuits are sure to be filed no matter what happens. Just make sure that the next time you hear famous people from the “do as I say, not as I do” crowd indignantly demanding the “right to know” what’s in food, check your hypocrisy meter.