It used to be Whole Foods was your best (or only) bet for finding organic food, but today where can’t you buy organic food? Krogers, Costco, Aldis, Target, and even Wal-Mart are now expanding their selection of organic products. This is creating somewhat of a supply shortage for the grocery store that helped kick off the fad. Organic farmers are able to find more places than ever to sell their Veblen goods, and Whole Foods is struggling to keep up with the demand they helped create.

Last June Stephanie Strom, reporting for the New York Times, broke the story about how Whole Foods had upset organic farmers with their new Responsibly Grown (RG) program. According to Whole Foods the Responsibly Grown (RG) program was designed, “to address critical health and environmental concerns associated with food production, including soil health, pesticide use, food safety, labor practices, greenhouse gases, water conservation, waste reduction and recycling.” In essence, the RG program was designed to ensure that all the products that the grocery chain sold lived up to the standard people believe they are buying into when they buy organic food.

However, organic farmers soon realized that being certified organic was not a default requirement of health, environmental friendliness, or worker welfare; it became possible for conventional growers to attain higher ratings than organic growers, which upset the latter group. Whole Foods eventually relented to demands from organic farmers and NGOs and now recently released emails obtained from a freedom of information act request detailed some of the behind-the-scenes panic Strom’s article created. The emails reveal a civil war is going on behind the scenes in the organic community.

This seemed like a huge step in the right direction for Whole Foods to take. A new rating system was based, not on the naturalistic fallacy but on the actual agronomic practices used on the farm. Unfortunately for organic farmers, this definitely gave the edge to conventional growers. As the organic label depends more on whether farmer inputs are “natural” versus what is less toxic, conventional farmers could get a best rating for a lower cost item because less resources could be expended to grow it. According to the Food and Agriculture Organization of the United Nations, “Production costs for organic foods are typically higher because of greater labour inputs per unit of output and because greater diversity of enterprises means economies of scale cannot be achieved.” According to Strom:

That means, however, the conventionally grown produce may end up with a higher rating. For instance, photos taken at a Whole Foods store in Capitola, Calif., and included with the farmers’ letter show a heap of conventionally grown asparagus from Mexico that is rated “best” for $4.99. Yet another photo, taken at a Whole Foods some 30 miles north in Cupertino, shows a pile of organic asparagus from Durst Organic Growers that is rated “good,” the lowest Responsibly Grown rating, for $7.99. 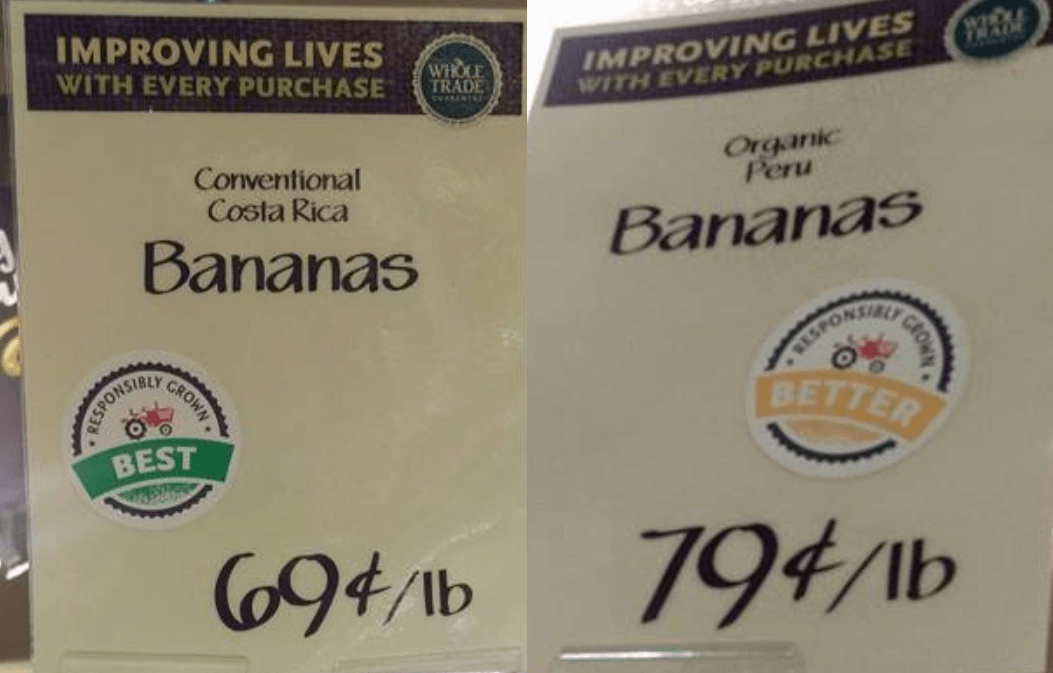 Conventional farmers are able to adopt common organic practices like crop rotation, cover crops and buffer zones while still being able to artificial fertilizer and synthetic pesticides. Organic growers, who felt they were being stabbed in the back by the corporation they helped build, grew disturbed by this turn of events.

One of the organic farmers featured in the piece highly critical of the RG program, Tom Willey, turns out to be a good friend of organic researcher Charles Benbrook. “The NYT [New York Times] story, and its various wripple[sic] effects, will have impacts no one can imagine,” Benbrook wrote in an email to Whole Foods and the farmers involved, “I refuse to believe that the views around the table are irreconcilable, and challenge you to get beyond the emotions of the day and find a way to keep this from becoming yet another divisive and damaging crack in the organic ‘community.’” Benbrook goes on to blame the farmers for going to the New York Times with their story because it “guaranteed a considerable loss of control over the dialogue”.

A former Washington State University researcher, Charles Benbrook has been in the news recently for promising an Australian organic industry leader that he could “ramrod” through research to question the safety of biotech crops. Acting as a consultant and advisor for the multi billion dollar industry comes off as quite hypocritical for a man who says public scientists who accept grants for biotech outreach smell like “skunks”. Benbrook even alludes to not being able to help without marching orders from Whole Foods (WFM), “My involvement would be up to WFM”.

These emails demonstrate just another battle in the ever growing organic civil war between those who just want to promote the label and those who wish to make global changes to the food supply. Cornucopia, a non-profit dedicated to promoting organic agriculture, is frowned upon by Benbrook for being involved. Benbrook sees the Responsibly Grown (RG) program as a way to force conventional growers to give up undesirable pesticides (by his standard) rather than through the promotion of organic agriculture. Whereas Cornucopia is more concerned with the promotion of products with the USDA certified organic label. For those like Charles Benbrook, giving consumers the option of buying foods certified organic (or NON GMO verified) is no longer good enough. “WFM [Whole Foods Market] must find a way to drive progress in the conventional ag world…”

This attack on conventional agriculture is made abundantly clear in the ultimate path Whole Foods decided to take. Rather than maintaining high standards for all of their farmers, they chose to satisfy the desires of extremists and change their program to raise the bar for conventional farmers and lower it for organic farmers. Without even being evaluated, organic farmers now automatically get a minimum of a “good” rating.  For those organic farmers deciding to be evaluated for the program, they would be given one-third of the points needed to achieve a “best” rating regardless of their actual practices.

No longer is the organic movement about promoting its own certification. With the demonization of modern agriculture through propaganda videos, mandatory seed breeding labels, and poorly done research studies, the organic industry has essentially declared war on high yield and low input agriculture. While developed nations like the United States can afford the luxury of food movements built on low yield and high input agriculture, the developing world cannot.

This article originally appeared on We Love GMOs and Vaccines here and was reposted with permission of the author.