The Cornucopia Institute (Cornucopia) was launched in 2004 by Mark Kastel and Will Fantle. It’s initial funding is murky. A claim that Cornucopia was started with donations from Organic Valley, a large farming cooperative, has been disputed by Kastel. Kastel was a public relations consultant for much of his career who, according to Kastel, helped launch the Organic Valley brand in the 1980s and 90s. He wrote in 2011:

Then I helped found the Cornucopia Institute eight years ago, when it looked like the wheels would fall off of this movement; when the giant corporate agri-businesses that has squeezed family farmers out of conventional farming, and that were responsible for the deterioration in the nutrient level and the safety of our food, were buying out, on a wholesale basis, all the brands that had launched the organic commercial movement.

Organic Valley is a cooperative of organic farmers based in La Farge, Wisconsin. Founded in 1988, it is the largest organic farmer-owned cooperative in the world with over 1,800 farmer-owners across the United States, Canada and Australia. Organic Valley markets products in all 50 states and exports to 25 countries. In 2015, annual sales topped $1 billion. The NGO is nearby in La Farge, WI.

Like Cornucopia, Organic Valley is critical of GMOs, using it as a symbol of conventional farming and the central point of difference with organic farming, calling it a “relatively new and unproven technology” that has led to the false promises that it can “feed the world.” It writes, contrary to the scientific consensus, “We don’t know if genetically engineered crops are safe, but we follow the precautionary principle: farming practices, such as the use of GMOs, should be prohibited until proven beyond doubt to be safe for animals, the environment and people.” Organic Valley has been a major funder of Charles Benbrook, an economist and former adjunct professor at Washington State University who has written numerous articles critical of genetic engineering and supportive of organic farming.

[NOTE: Kastel emailed the GLP asserting that the Cornucopia-Organic Valley financial connection is a “rumor” and “conjecture” and has threatened the GLP with a possible law suit for raising the issue. Cornucopia never legally challenged prior assertions of a seminal relationship between Organic Valley and Cornucopia. Kastel maintained that “Cornucopia was formed because its two cofounders could not convince [Organic Valley] to go after illegally operated factory farms that were undermining the organic dairy industry.”]

Cornucopia describes itself on its website as an “organic industry watchdog”:

Cornucopia often acts as a vessel for pro-organic and anti-GMO propaganda. Its “Media News” section offers a potpourri of straight news of interest to the organic community, pro-organic propaganda news releases, and posts from fringe, even quack anti-GMO websites, such as a February 3, 2016 reposting of an attack blog by Carey Gillam, the former Reuters reporter, who has taken on the position of ‘research director” for US Right to Know in its campaign to discredit biotechnology scientists. It has aggressively supported mandatory GMO labeling campaigns.

Cornucopia’s primary modus operandi is investigating and using legal measures targeted mostly at large-scale “corporate” organic companies, many of whom are direct competitors of Organic Valley, usually with an accusation that the target business is engaging in practices that violate USDA organic regulations. Cornucopia has also filed legal complaints against some of Organic Valley’s suppliers.

In 2012, Cornucopia posted on its website a white paper that it calls “The Organic Watergate,” supposedly documenting that the USDA has worked in a “conspiracy” with corporations to “cripple” the Organic Foods Production Act of 1990. Critics of Cornucopia claim that it targets farms that do not fit Cornucopia’s image of what organic farming should be.

Cornucopia has aggressively challenged organic companies that it believes does not uphold its views of how the organic business should operate. In 2009, Cornucopia filed a formal legal complaint claiming that Dean Foods (American Food and Beverage Company that specializes in dairy products) was mislabelling it’s Silk almond milk as organic. Cornucopia also filed a report in which it claimed many veggie burgers contained hexane. The report noted that those products labeled ‘natural’ or ‘made with organic ingredients’ were likely to contain hexane. It also put our “scorecards” that rate “how organic” various companies organic products are. For example, scorecards exist for dog food, eggs and cereal.

In 2014, Cornucopia released the results of its investigation into several large “corporate” organic farms, including Aurora Organic Dairy, Horizon Organic and Silk, releasing aerial photos of 14 large-scale organic farms–five dairies and nine chicken operations that supply well-known store brands such as Walmart, Target and Costco. Along with other groups that included Friends of the Earth, Credo, Maine Sierra Club, Mercola.com, Weston Price Foundation, Farm to Consumer Legal Defense Fund, Maine Organic Farmers and Growers Association and Green America, it worked with the lobby group the Organic Consumers Association to organize transport for people to attend a Capitol Hill protest. The goal was to show how little these larger organic operations portray the family farm image that most consumers associate with organic farming and also to target farms that it believed were in violation of organic farming regulations. As part of its investigation Cornucopia posted several photos of these farms on its websites. The following picture was described by Cornucopia as:

“Overview of the two feedlots. It’s important to note that virtually all the surrounding fields, which could be used for pasture, have been recently cut and baled for hay. There is effectively no pasture available to these animals.” 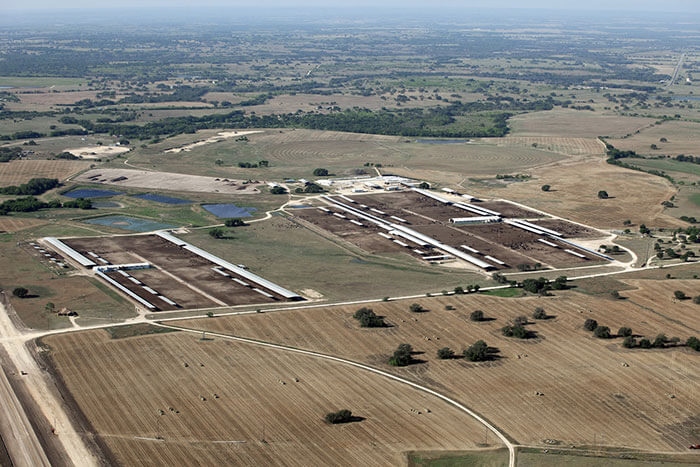 Mark Kastel said of the investigation: “We targeted them based on scale…When you get to [5,000] or 10,000 cows, you know that they’re gaming the system.” Cornucopia ended up filing formal complaints against 14 operations for what it claimed were violations of USDA organic regulations.

The campaign was highly criticized by some groups, particularly by some organic farmers. Nate Lewis, a specialist on organic certification of livestock operations for the Organic Trade Association, condemned the photos for lacking context, writing, “for any of these photos, I could come up with a completely valid reason for what you’re seeing.” For example animals could be inside during the time these photos were taken because it was too hot or too cold outside.

Cornucopia also published photos of an egg-producing facility in Idalou, Texas owned Chino Valley Ranches. The photos, Cornucopia claimed, showed that chickens at the farm were not being given the amount of outside access required by organic regulations. But according to records obtained by National Public Radio from the company’s general manager, on the day that the photos were taken the chickens did have sufficient access to the outside.

Aurora Organic Dairy has claimed that one of the photos, identified as an Aurora operation by Cornucopia did not actually belong to Aurora. Aurora had owned the farmland but had sold the land six years prior and at the time of the photo the land was being used as a conventional, non-organic, heifer-raising facility.

In 2015, Cornucopia launched a campaign against Whole Food for the grocery chain’s “Responsibly Grown” labeling system. The Whole Foods labels rate produce based on a number of factors such as GMO Transparency, farming practices that protect air, soil and human health, and pesticides usage. The overall goal of this labelling system was to give customers more information about how the food they were buying was grown. 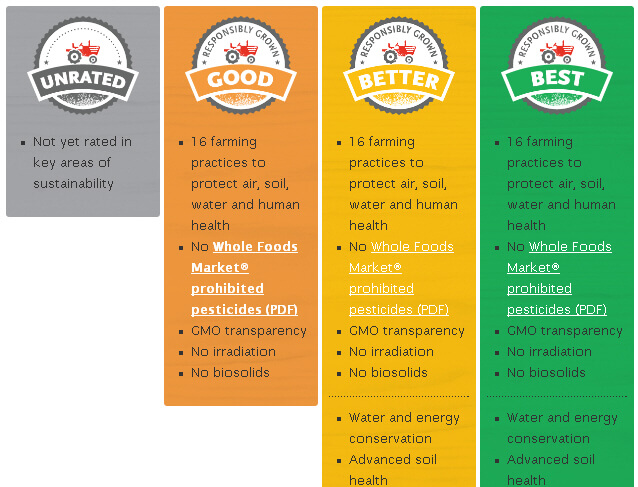 Quite frankly, we don’t understand how anyone who knows as much about organics as WFM [Whole Foods Market] founder Mr. Mackey, and the other top management at Whole Foods, could ever call conventional food the “BEST.”

Cornucopia also objected to the fees farmers would have to pay to comply with Whole Food’s labels:

Here was a corporation, with a market capitalization exceeding $14.5 billion, asking mostly family-scale farmers, some of the best farmers in this industry, to pony up between $5,000 and $20,000 to comply with the program’s reporting requirements and, for some, purchase new equipment.

In July 2015, Cornucopia announced that Whole Foods had bowed to its demands. Included in the changes was a provision that any organic farm would receive a minimum “good” rating, whether the farm chose to participate in the labeling program or not. In contrast, conventional farmers who chose not to participate would continue to receive an “unrated” grade. Inspections were also eliminated, and replaced with a farmers own word.

Note: Cornucopia is known for its aggressive legal tactics. sometimes making slander and libel threats to journalists, corporations or organizations that it comes into conflict with. Jon Entine, executive director of the GLP, has been the recipient of such threats previously. The GLP was also legally threatened after this post first appeared. GLP had used publicly available documents in preparing the original post. GLP received numerous aggressive and threatening emails from Mark Kastel after the post first appeared. Kastel contested some of the facts and the tone of the posting. Although we are not convinced that some or all of his representations are accurate, as he provided no documentation as to their veracity, despite GLP requests, we did modify and qualify the sections that he challenged. Nonetheless, Kastel continues to threaten the GLP with legal action, and his tried to interfere in the GLP’s First Amendment protected right to report on issues of public interest involving a well known 501c3 charity. GLP has operated fully within the boundaries of the First Amendment and stands by the blog as posted, and the open and cooperative process it engaged in with Mr. Kastel in resolving his concerns. Sections of Mark Kastel’s bullying threat letter is below:

We would ask that you pull down the initial post and create a new URL and promote it the same manner that you did the original webpage. If you did any outreach, through email, social media or any other vehicle, we would respectfully ask that you promote the new posting in the same manner. It would include the correction as an introduction, and be overtly title as “Correction on Cornucopia Background,”  and then you can include your biased appraisal of our organization as you see fit.

This will save both of us a lot of time, trouble and expense and possibly increased exposure and scrutiny of your practices. We have saved screenshots of your original work and in addition to contacting our legal team will reach out to media critics and others that might have an interest in how industry uses surrogates to attack public interest watchdogs.

Please let me know if you’d like to work out a settlement. If you post this correction, and meet our requirements for its dissemination, we will be happy to commit not to pursue further legal action.

The GLP is an independent public interest watchdog. The GLP cordially declined to capitulate to Cornucopia’s attempts to subvert the First Amendment. We stand by our profile and our transparent reporting process. After the positing of Kastel’s verbatim email, GLP received another email from Kastel claiming, “I just read your update and it contains some additional false information,” Kastel refused to respond to a GLP request to elaborate as to what “false information” was posted.