The organic food movement has been surprisingly quiet about the Freedom of Information Act (FOIA) requests several of us have submitted on university scientists working with them (which can be found here and here). I give them some credit for that, any movement that submits their own such requests in the name of transparency should be willing to take what they dish out.

So it actually took me by surprise to see one organization call these requests malicious. GMWatch, run by Jonathan Matthews and Claire Robinson, was quick to applaud the requests submitted by US Right To Know. When the tables were turned they lashed out like a rabid dog backed into a corner.

Why would they act this way? What were they afraid of? Jonathan Matthews and Claire Robinson, along with their organization, are British. Neither of them are university scientists. A FOIA request here in the United States should not impact them in any way.

Requests we filed on Charles Benbrook would slowly answer this question. An email forwarded to Margaret Mellon of the Union of Concerned Scientists included information Benbrook hoped could be used for their, then, upcoming debate with Rob Fraley and Alison Van Eenennaam for Intelligence Squared.

This in and of itself is not that unusual, it would be expected for the two to collaborate ahead of time via email. It was the source of the forward that caught our attention, something called the “gmolist”. A Google email group that sounded a lot like the controversial “journolist” group that Politico reported on years back.

It turns out that the “gmolist” is run by none other than Claire Robinson of GMWatch, Earth Open Source, and GMO Free USA.

Robinson and Matthews must have known ahead of time that these FOIA requests submitted on Benbrook would result in the handing over all of their emails to us. The “gmolist” is more than just a way for her hand selected group of trusted activists to share stories, it is being used by them to collaborate on an elaborate propaganda campaign against biotechnology.

When Gilles-Éric Séralini‘s team published a study claiming that ALL GMO studies were contaminated, insinuating that all safety studies are invalid, scientists around the world criticized the work. Dr. Robin Mesnage, of King’s College School of London, part of Séralini’s team and a member of the “gmolist”, began formulating a response to the mainstream critics. 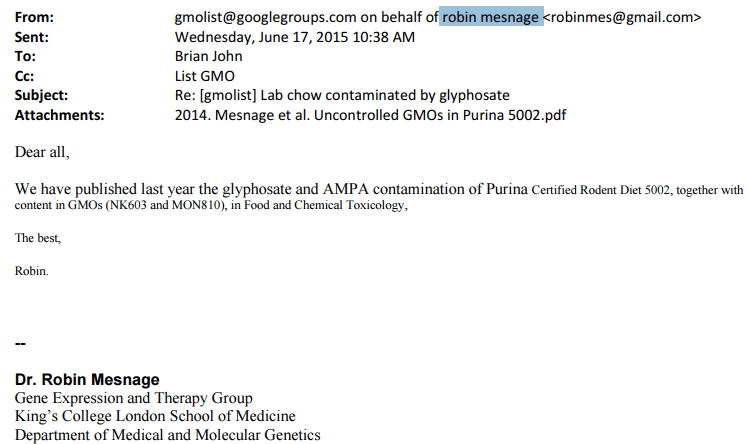 When the criticism began appearing about his paper, “gmolist” was used to mount a public relations response. Dr. Mesnage’s counter arguments were examined by John Fagan (founder of Genetic ID, used to test food for GMOs), Professor Jack Heinemann of the University of Canterbury, and novelist/founder of GM Free Cymru Brian John. 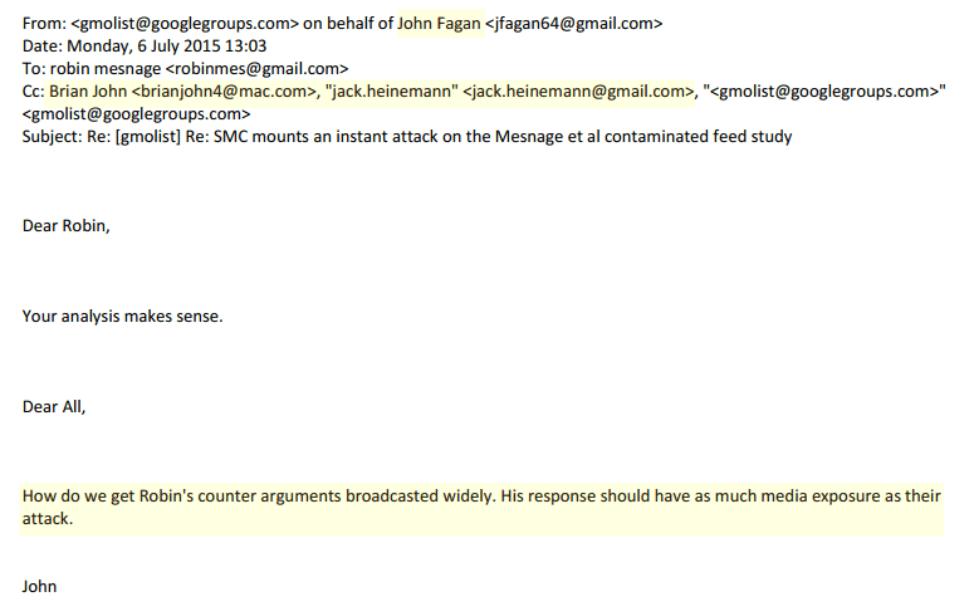 Most troubling were Claire Robinson’s response. She appears to promise to cover Mesnage’s counter arguments, but states that she will leave his name off of anything she writes. This scientist is being given the impression of independence, while directly working with groups that have financial stakes in the research he is presenting.

When GMWatch attempted to refute earlier claims I made, they denied having any connections with Fagan. Yet Fagan, Robinson, and Matthews are all a part of this group.

This illusion of independence shattered by these emails also extends to the Consumer’s Union. Claiming to be “Unconstrained by advertising or other commercial influences“, they claim to be an independent nonprofit and unbiased. Yet its Senior Scientist, Michael Hansen, is also found collaborating with Mesnage and even endorsing the addition of more people to the list.

When the Consumers Union cited Charles Benbrook in an article about pesticide residue in conventional food, it failed to disclose any of these connections. Hansen even cited one of Mesnage’s studies in testimony to Massachusetts law makers in regards to mandatory labeling of food containing genetically engineered ingredients. For Hansen to claim independence and a lack of bias is laughable at best, dishonest at worst.

If there is any doubt about organic industry ties to this group, it is resolved by the inclusion of Ken Roseboro, editor of The Organic & Non-GMO Report. The magazine describes itself as “providing information you need to respond to the challenges of genetically modified (GM) foods“. In reality it is nothing more than a source of advertising for many different organic corporations to market their products.

Roseboro is found offering to write an article at Robinson’s request. The article in question accused the Coalition For Safe and Affordable Food of lying to a resident of California, without any evidence beyond one anecdote.

This is what anti-science causes do, and have done before: astro-turf organizations infest social media trying to build a narrative, and contaminate media with their spin on biotechnology. Behind the scenes these “independent” organizations collaborate on how best to spread their propaganda. Claire Robinson leading this organization makes sense; someone already in a cult knows best how to run one.

This article originally appeared on We Love GMOs and Vaccines as GMOList: Inside Claire Robinson’s Anti-GMO Propaganda Machine and was reposted with permission of the author.