Are bees in peril from neonicotinoids? Farmer evidence challenges doomsayers

The “Bee-pocalypse” has been cancelled. Global bee populations are rising and are now near historic highs. In Canada, the bee populations are up 13 percent since 2011, from 637,920 colonies to 721,106 in 2015. While there are serious threats to bees, we assert that the use of neonicotinoid pesticides (or neonics) in agriculture is not one of them. Continued focus on neonics by environmental groups detracts from and potentially worsens real threats to bees. 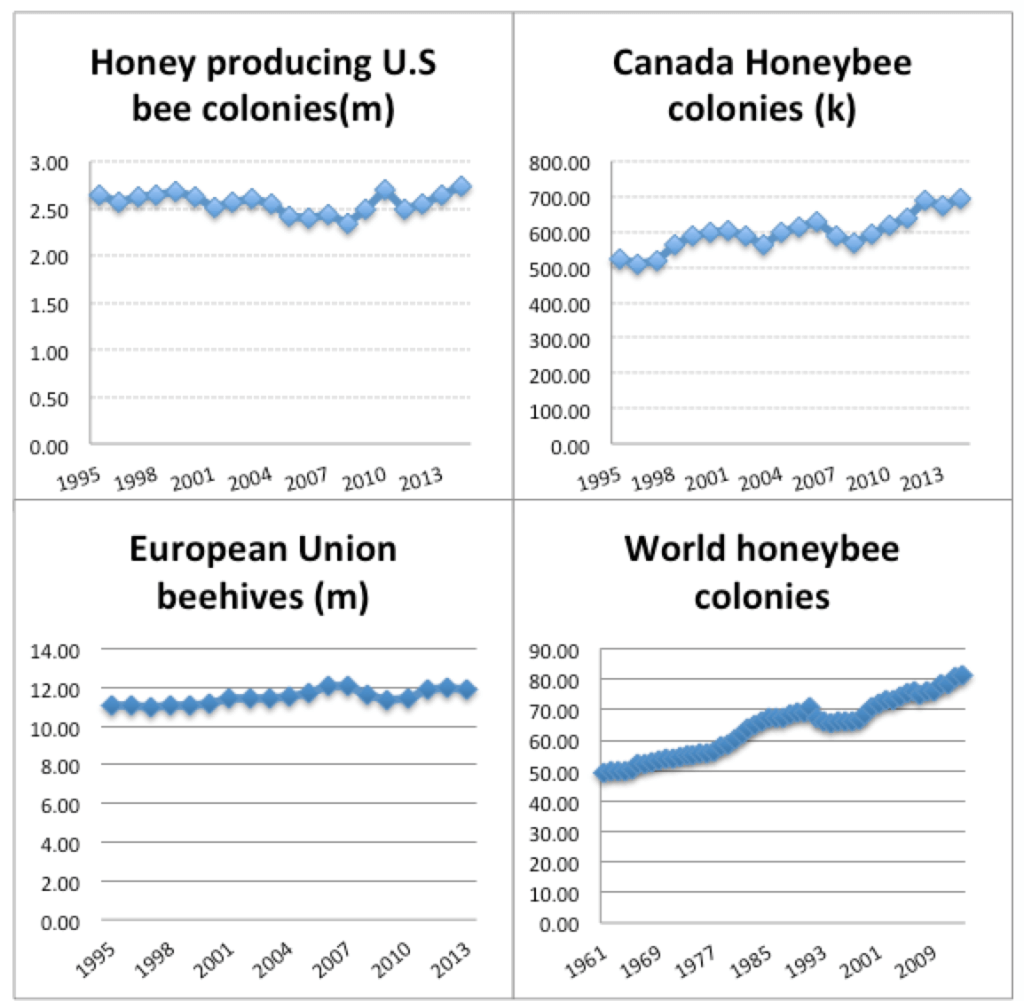 Neonic pesticides are synthetic compounds based on the natural compound nicotine. They have been widely used since the mid 1990’s. They have low toxicity to birds and mammals but insects are extremely sensitive to their effects.

Bee-pocalypse was falsely alleged to be a result of neonic use in agriculture. Supposedly causing colony collapse disorder (CCD).

This wild suggestion began in 2010 when “activist scientists” in Europe began targeting neonics with the goal of getting its class of insecticide banned. In 2013, they were successful in getting the EU to ban agricultural use of neonic for two years. That ban is still in place, despite the evidence. David Zaruk wrote a series of articles that give details of this group’s activity.

In North America, there is a very loud minority calling for the complete ban of neonics. So far the provincial government of Ontario (Canada) has been the only administration to place major restrictions on neonic use in agriculture. These restrictions are highly contested.

The U.S. Environmental Protection Agency just released their first of four reports on neonics use and concluded there is minimal risk to honey bees from the neonic (imidacloprid) seed treatments for tuber, bulb, brassica (including canola) vegetables and corn.

In the western provinces, bee numbers are fantastic. Most of Canada’s canola, largely pollinated by bees, has grown out west and virtually all of it has neonic seed treatment. Like Canada, Australia has healthy bee numbers with more than 2 million acres of canola, much of which is neonic seed coated. Bees swarm over Canola field treated with neonic treated seed in Morawa, Western Australia on Bill Crabtree’s farm

A key fact is Varroa destructor has not yet spread to Australia. Both the Western Canadian and Australian experiences demonstrate the safety to bees of widespread use of neonic seed treatments. Ironically, Ontario is the only province in Canada where bee colony numbers have been poor in recent years. But last winter, the honey bee population was as healthy as it’s been in more than a decade, according to the Canadian Association of Professional Agriculturalists…and it had nothing to do with the neonic ban that the county put in place. The ban took effect with the spring planting this year. It’s clear that overwinter losses had little to nothing to do with neonics, but fluctuated based on weather conditions and most importantly the presence of Varroa mites.

Activist scientists and environmental NGO’s refuse to acknowledge that by removing neonics options for farmers, older and harsher chemistries will have to be used. In 2013 neonic seed treatment was banned in Europe. In 2014 extensive flea beetle infestations in the UK forced farmers to ask for, and receive, permission to repeatedly spray foliar applications of pyrethoids. Such pyrethroids are deadly to bees on contact but were used to protect their rapeseed (aka canola) crop. In the second year of the ban, UK farmers saw a 10-17 percent crop yield loss.

Next year’s flea beetle pest pressure may be significantly higher. This will force many farmers to forego growing canola altogether until the ban on neonics is lifted.

Neonics are a minor issue for bee health and the continued false allegations are pulling resources away from solving the real threat. Mississippi State University apiculture specialist said it well: “My top three reasons for bee colony death are Vorroa mites, Varroa mites and Varroa mites.” A 2015 USDA report concluded:

the Varroa mite is … the single most detrimental pest of honey bees, and is closely associated with overwintering colony declines

This parasitic mite sucks the hemolymph (bee blood) and is responsible for transmitting up to 18 different viral pathogens to bee colonies. It is very clear that Varroa destructor mites represent a very real and present danger to honey bee populations.

If government regulators are serious about protecting bees, they must focus on the real threats and stop making policies based on bad science and environmental hype.

Will farmers be allowed to use safe effective neonic seed treatments or will they be forced to change crops? Even worse, will farmers be forced to resort to using older compounds that really are deadly to bees? Will government regulators listen to the science or will the loud calls from NGO’s win out? We are hoping that common sense will prevail.

Robert Wager, M.Sc., is a faculty member in department of biology of the Vancouver Island University, Nanaimo, BC, Canada.  Wager writes and speaks on genetically engineered crops and food. Follow him on Twitter @RobertWager1,