Are you a man who’s good at recognizing that other people have feelings? How about a woman who enjoys observing and cataloging railroad cars? Well, your brain and genitals may be mismatched.

That’s the premise of an Is Your Brain Male or Female? a BBC documentary about sex differences and the brain. Reporter Michael Mosley lists psuedo-scientific details to support his premise that our brains as well as our bodies have a gender. But while he points to differences that range from the trite (women feel the feelings better!) to the entirely superficial (men have longer ring fingers than index fingers) he ignores a growing body of work that documents fundamental differences between the sexes, including the connectivity of cells, potential physiological and chemical differences and sophisticated behavioral differences.

Let’s start with the hands, as Mosley does:

Sit down for a moment. Relax. Then clasp your hands together so your fingers entwine — don’t overthink it! Now look at your thumbs. Which one is on top — the left one or the right? If you are a man, the odds are it will be the left; if you are a woman, it is more likely to be the right.

Now what in the world can two anatomical quirks tell us about gender and our brain. Not much. The dominant side while hand clasping is a transient finding, it seems constantly proved then disproved when you search the literature. The second, the difference between the length of index and ring fingers, does correlate to sex and prenatal testosterone exposure, which is part of the fetal sex determination process. But that ratio can’t for example, tell you if you’ll be a more “masculine or feminine thinker,” particularly because it’s very hard to tell if that distinction even exists.

When psychology does try to ‘sexualize’ ways of thinking we end up with really crude measures. For example, some argue that ‘feminine’ thinking can be tested by identifying emotions based only on photos of pairs of eyes. That’s often compared with performance on spatial reasoning tests, which they argue is a more masculine skill. But both of these are actually spectra. You could suggest that a man would score higher on the spatial skills test than a woman, but you couldn’t take an individual score on either test and say if that person was male or female. The ‘thinking style’ is not predictive of sex at all. The generalization only works one way.

What’s doubly trite about these tests, and this way of thinking, is that it undermines some actually very interesting and important research showing that men and women have differing brain structures, are more likely to suffer from differing neurological disorders and even respond to addiction in different ways.

Last year, scientists at UPenn used high-level MRI machines to map how brain cells connected to each other. They found that men had more connections going from the front to the back of the brain, while women had more that criss-crossed the middle. Subsequent studies suggested that maybe this was based on the size of the brain and not the sex of the person. Men generally have bigger brains as they are generally bigger people. But, the study still points to anatomical differences which could underlie differences we see in behavior.

Even before this latest in-depth imaging study neuroscientists had documented changes in anatomy for women and men, Larry Cahill writes in Scientific American:

These imaging experiments reveal that anatomical variations occur in an assortment of regions throughout the brain. Jill M. Goldstein of Harvard Medical School and her colleagues, for example, used MRI to measure the sizes of many cortical and subcortical areas. Among other things, these investigators found that parts of the frontal cortex, the seat of many higher cognitive functions, are bulkier in women than in men, as are parts of the limbic cortex, which is involved in emotional responses. In men, on the other hand, parts of the parietal cortex, which is involved in space perception, are bigger than in women, as is the amygdala, an almond-shaped structure that responds to emotionally arousing information—to anything that gets the heart pumping and the adrenaline flowing.

Beyond anatomy we know there are physiological difference between men and women’s brains as well. And those can be amplified by our life experiences. Marlene Berman at Massachusetts General Hospital uses brain imaging to study gender differences and alcoholism. The disease primarily affects one set of nerve fibers in men, the corpus collosem. But in women, the damage happens all over. Recovery showed a different pattern Berman told BU Today:

“We found that in men, the corpus callosum recovered at a rate of one percent for each additional year of abstinence.” But for those who’d abstained from drinking for less than a year, she found evidence of increased white matter volume in the women, but not the men, who showed no signs of recovery until after a year. 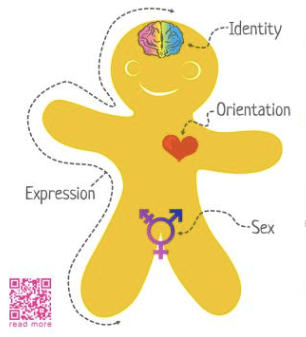 Other neurological disorders like autism and depression affect the sexes differently. Autism affects more males than females and women are more prone to developing depression in their lifetimes. Perhaps anatomical and physiological differences discovered using this basic research will help explain those disease patterns and create substantive, targeted treatments.

Changing social ideas of gender also fly in the face of Mosley’s premise. Although scientists have long tried to correlate the finger length ratio with homosexuality and by proxy lower than normal testosterone exposure in utero for gay men and higher than normal for lesbian women, the data have never been able to prove the associations. Moreover, as we begin to recognize the social concept of gender as a spectrum, the idea that a thinking style or one facet of personality is more male or female starts to look like a joke. Caitlyn Jenner may believe ‘her brain is more female than male’ but science has no way of looking at Caitlyn’s brain and identifying gender either anatomically or behaviorally, at least not yet.

It’s extremely unlikely that continuing to trot out finger length ratios or dominant fingers while hand clasping is going to help advance this research or give the public a fair idea of what researchers know about sex, gender and our brains. It’s a shame Mosley used his platform at the Daily Mail for such trivialities. Let’s all hope he has time to get more substantive in his documentary.

He is absolutely correct, however, in saying that when we find anatomical differences between sexes and confirm their link to behavior, at least on a microscopic level, we won’t prove whether those differences are caused by genes, environment or a combination. The nature versus nurture debate lives on. But it seems rather obvious that human sexuality and gender identity, like all complex attributes from body weight to extroversion, is likely determined both by our individual biological potential and our lifetime experience.