The international protest “March Against Monsanto” (MAM) was never based on truth. The movement perpetuated myths about GMOs to demonize a company that has a really bad PR department. But now that Bayer is buying out Monsanto, what is MAM to do? These angry activists must channel their rage somewhere. So, March Against Monsanto has decided to become hard-core anti-vaccine.

With over 1.2 million followers, the influential group’s Facebook page is dangerously unhinged from reality, featuring posts promoting everything from anti-vaxxer propaganda to historical conspiracy theories. See this post, for example: 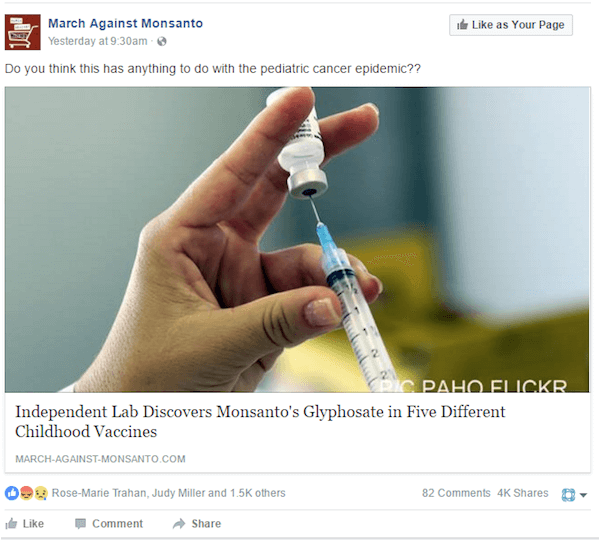 Perhaps MAM’s newfound mission shouldn’t come as a surprise. Research has shown that people who believe in conspiracy theories are willing to believe almost anything… If you ever gave MAM’s positions any credence, let their most recent behavior serve as witness to the deeply unethical… nature of their… ideology.

The GLP aggregated and excerpted this blog/article to reflect the diversity of news, opinion and analysis. Read full, original post: ‘March Against Monsanto’ Is Now An Anti-Vaccine, Conspiracy Movement