Cause for concern over claims of “dangerous” glyphosate in wine, breast milk, cereal, etc.?

Despite the fact that there is far less reason to worry about the ‘dangers’ of glyphosate when compared to almost any other pesticide, many activists critical of crop biotechnology make scary claims about the presence of micro-traces of the herbicide in foods and on our farms. They imply that findings of glyphosate in parts per billion (one part per billion equates to approximately one second in 32 years) must be a significant health danger.

Just this week, Food Democracy Now—a virulently anti-GMO group not known for its science expertise—claimed that it had funded “tests” that showed “rough estimates” of trace amounts of glyphosate in some common foods. No lab results were released, as the “study” had no data, no experimental controls and was not peer reviewed—the announcement amounted to a public relations stunt. But it had its intended effect—hundreds of anti-GMO websites picked up the “news,” and circulated it with the usual round of scare headlines.

Here are a few examples of misleading for false claims about the dangers of glyphosate.

Is there glyphosate in water?

Two years ago, the web was flooded with ‘reports’ on fringe websites claiming, as EcoWatch put it, “Monsanto’s Roundup Found in 75% of Air and Rain Samples”. “Spraying Roundup may have short-term economic benefits for Monsanto, but the potential long-term risks could present significant challenges to people in affected regions of the country,” the activist group claimed.

EcoWatch and many other anti-GMO groups twisted the report. It focused on air and water directly on and over the fields where the pesticide was used. And it painted glyphosate in a constructive light, documenting that the herbicide had dramatically reduced the overall traces of pesticides found in the water and the air in the US from 1995-2007, The 75% figure was meaningless. The study dealt with mind-bogglingly fine-tuned detection using mass-spectrometry (as an example, satellites and spacecraft use mass spectrometers for the identification of the small numbers of particles intercepted in space). The pesticide was present in concentrations millions of times below any biological relevance, let alone at ‘dangerous’ levels – the ability to even detect them is an ode to the wonders of modern measurement techniques. The independent website Biology Fortified has a deconstruction of the misleading ‘reporting, in its post, RoundUp in 75 % of air? What the report actually says.

Is there glyphosate in urine?

Hearing that there is glyphosate in your urine may make even small potential health risks seem more personal and tangible. Should you worry? If something can be detected in urine it is, firstly, a sign of something being cleared from your body – glyphosate does not bio-accumulate. Dozens of studies, including those cited by the Environmental Protection Agency in its review of the herbicide, have documented that it gets removed from your system.

Secondly, with the incredibly sensitive measuring techniques we have at our disposal, we can detect traces of innumerable amount of substances from most any source. Almost any chemical that you can name turns up regularly in parts per billion or even parts per trillion biomonitoring studies. This amounts to factoids; humans ingest minuscule amounts of a mind-blowing number of molecules on a daily basis, a great many of which would cause great harm if they were present in high enough concentrations. But chemical traces at these microscopic levels have no impact; they drown in the flood of water, stomach acids, bacteria, proteins, fats, carbohydrates and minerals constantly aflush in our digestive system.

So, what does the science say about the amounts of glyphosate residue detectable in urine? This review article, A critical review of glyphosate findings in human urine samples and comparison with the exposure of operators and consumers, concludes as follows:

A critical review and comparison of data obtained in a total of seven studies from Europe and the US was performed. The conclusion can be drawn that no health concern was revealed because the resulting exposure estimates were by magnitudes lower than the ADI [acceptable daily intake] or the AOEL [acceptable operator exposure level].

Just to be clear—the daily intake levels are themselves set hundreds or even thousands of times higher than could possibly have an impact. What shows up in our urine amounts to levels hundreds of thousands to millions of times below what could potentially impact us. The levels of glyphosate in urine, in other words, are ridiculously small.

Claims of risky levels of glyphosate in breast milk originated in 2014 with the activist organization Friends of the Earth Europe and Mom’s Across America. These groups funded an informal test that found minute traces of glyphosate in breast milk and urine, linking glyphosate to a myriad of ailments including autism, allergies, infertility, eczema, fibromyalgia, Crohn’s Disease, childhood tantrums and pneumonia. The press releases caused a furor, with the story circulated even in such nominally mainstream blogs as Civil Eats.

If there were evidence for a role of glyphosate in any of the above-mentioned ills, it would be easy to see why glyphosate in breast milk would scare you. But the evidence for that, or any realistic connection between glyphosate and tantrums, autism, or any other ailment from that list, is sorely lacking. The ‘finding’ of glyphosate residue in breastmilk comes from an incorrectly processed assay of only ten samples with a method that is known to generate false positives, gathered and reported by none other than Zen Honeycutt herself.

Meanwhile, a real scientific study by a lactation physiologist confirms the opposite. In a study led by Washington State University scientist and lactation expert, Michelle McGuire, who found no evidence that glyphosate accumulates in breast milk:

“The Moms Across America study flat out got it wrong,” said McGuire, who is an executive committee member for the International Society for Research in Human Milk and Lactation and a national spokesperson for the American Society for Nutrition. “Our study provides strong evidence that glyphosate is not in human milk. The MAA findings are unverified, not consistent with published safety data and are based off an assay designed to test for glyphosate in water, not breast milk.”

McGuire’s team merely confirmed previous studies that had found no traces of glyphosate in breast milk. And two subsequent German studies, including an independent report by scientists affiliated with the independent German Federal Institute for Risk Assessment (BfR)–which does risk assessments for the European Commission–published a separate study in 2016 found no traces of glyphosate.

For a great discussion about breast milk research, as well as the ELISA assay and its limitations, you can listen to this podcast in which University of Florida geneticist Kevin Folta interviews McGuire and the analytical chemist Thomas Colquhoun: Glyphosate in breast milk and wine?

Should we worry about glyphosate in wine?

You may have read near hysterical reports about glyphosate residue in wine. “Because Roundup/glyphosate is not permitted on organic or biodynamic vineyards, the results are unexpected and can only be explained by the drift of chemical sprays from neighboring vineyards,” claimed the person who oversaw this “study”—none other than Zen Honeycutt. 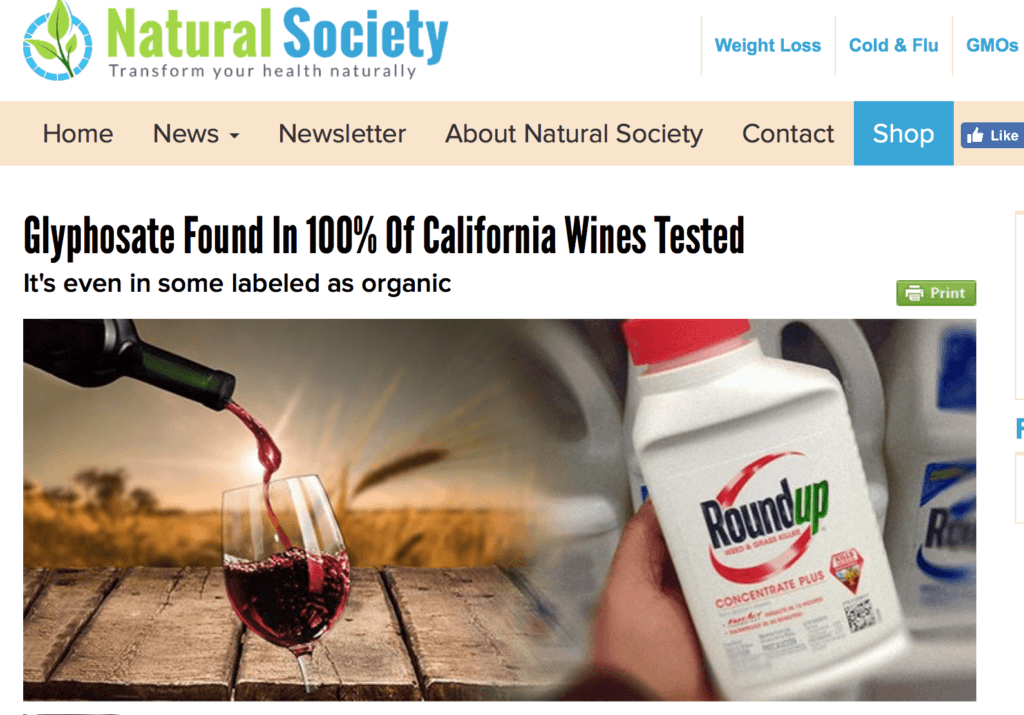 Honeycutt’s story, which as in the breast milk scare case appeared first in EcoWatch, was filled with out-of-context alarms about glyphosate as a carcinogen, as Kevin Folta deconstructed in his podcast discussion with analytical chemist Thomas Colquhoun in Glyphosate in breast milk and wine? 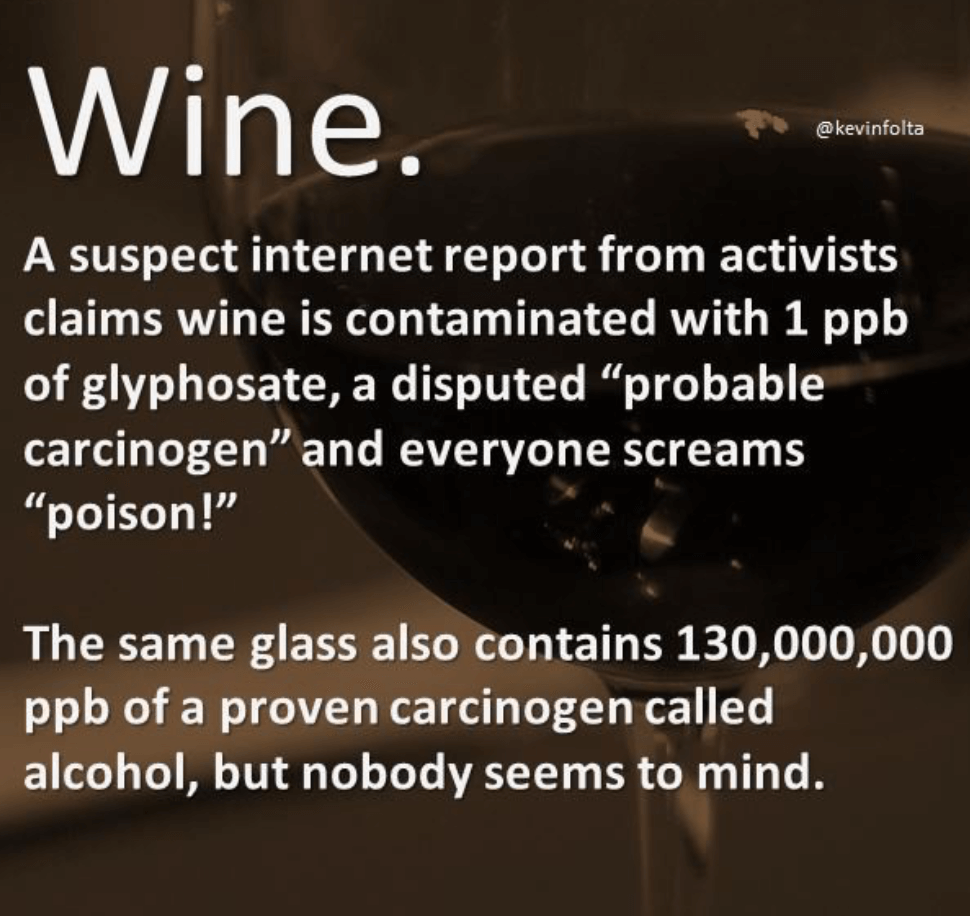 Carey Gillam, the former Reuters reporter (who left under a cloud of allegations of her biased reporting of GMO and glyphosate scares—she now writes for USRTK, the organic industry-funded group harassing biotech scientists) wrote an article in September trumpeting the latest manufactured fear claim: “FDA Find’s Monsanto’s Weed Killer in U.S. Honey. There was almost no data presented, just an FDA summary that apparently found 22, 41, and 170 parts per billion of glyphosate residue. That’s 0.022-0.170 mg/kg honey. If you recall from above, even the rumor about glyphosate in wine claimed 1 ppm (1000 ppb).

So, is there need to worry? To get to the most restrictive daily allowed limit—which has a 100 fold safety margin built in—a person would have to ingest about 6.6 pounds of honey per pound body weight in one day. In other words, a 125-pound woman would have to consume 825 pounds of honey in a day to reach the level that has a safety factor of 100 times!

To even see a temporary inhibitive effect from glyphosate on our gut bacteria, you’d have to aim higher – around 6600 pounds, or more than 3 tons, of honey in one go.

Iida Rushalme, Finnish by birth and now a Swedish resident, is a cell biologist and science communicator, and author of the Thoughtscapism blog, which is where this piece originally appeared–here. She is a contributor to Genetic Literacy Project, Skepti-Forum, and Biofortified, as well as to the cultural journal The Woolf. Twitter: @Thoughtscapism