Milk, and especially conventional milk, has been under the microscope, led in part by a confusing campaign by Consumer Reports. Last year, in a bizarre report, “Milk Alternatives: Should You Sip or Skip,” (NOTE: since removed from CR site, but a small picture of the since removed infographic is below) the magazine had issues with milk alternatives, including soy, coconut milk, soy milk and almond milk, claiming they all had trace trace amounts of heavy metals.

Heavy metals are a new obsession on the green left, particularly on alternative product sites that try to scare people into buying ‘natural’ products that are often untested, useless or worse. Every major science agency around the world has determined that the kind of levels noted by CR are biologically meaningless, b 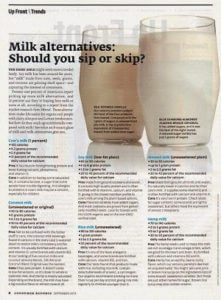 ut that hasn’t stopped the increasingly science-light magazine from issuing scare-o-grams.That’s the direction CR has been heading in in recent years.

But the magazine’s most egregious move was its dissing of GMO soy milk. Consumer Reports has been on a multi-year campaign raising doubts about the safety of GM foods in defiance of the findings of mainstream science. Upwards of 94% of the US soy crop is GMO so it’s no surprise that your favorite edamame or your morning glass of soy milk is made from soy beans designed to be grown with fewer insecticides (Bt soy) or less toxic herbicides (herbicide resistant soy). In its “Cons” section, CR encourages consumers to “Look for brands with the USDA organic seal or the non-GMO verified label.” 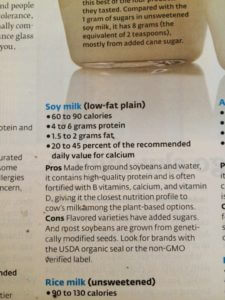 In the report, CR offered a backdoor endorsement of organic and non-GMO verified brands—again, without any evidence to back it up. But you can no longer read this CR report; sometime over the last few months, it pulled it–apparently embarrassed by the furious pushback by science sites such as the article by Jon Entine on the Genetic Literacy Project and on Biofortified, where University of Florida’s Kevin Folta eviscerated the once venerable agency, calling its analysis “unscientific.”

Clicking on the old link to the now retracted CR advisory takes you to a new version, “Choosing the right milk for you: How almond, coconut, hemp, rice, and soy milks compare with dairy,” which takes out all the gibberish about heavy metals but still takes a gratuitous swipe at GMO milk and generally urges consumers to stick exclusively with organic milk or milk labeled “non GMO”.

Is that good advice? It’s the kind of guidance that you often find on on non science sites, particularly those dominated by moms and natural food promoters. Organic supporters have even taken to trying to shame mothers who do not buy organic milk and other products, as farmer mom and food activist Sarah Schultz outlined in a Genetic Literacy Project post, I feed my kids genetically modified foods and not organics–and that doesn’t make me a ‘bad mom’. Conventional milk has taken even more heat because much of it is linked to “Monsanto’s rBGH.”

Let’s address these common concerns one by one.

Organic Milk is produced without antibiotics. Regular Milk is safe from antibiotics as well!

Apparently every tank of raw milk is checked for antibiotics residue before the milk gets processed. If a tanker is found positive then the milk is rejected for human consumption.

In particular, here’s what the FDA states about the process of testing for drug residues:

The PMO requires a milk sample to be collected every time raw milk is picked up at the farm (also known as a “universal sample”). A milk sample is also taken when a truckload or bulk tank of milk arrives at a Grade “A” dairy plant for processing. Each arriving truckload of milk at the plant must be tested for the presence of at least four of six specific Beta-lactam drugs (penicillin, ampicillin, amoxicillin, cloxacillin, cephapirin, and ceftiofur).

If this bulk milk sample shows concerning results, each farm that supplied milk for that truckload will undergo mandatory testing. Universal samples collected at the farm level are typically only tested if the bulk tank of milk that arrives at the processing plant tests positive for drug residues.

Now every year the FDA produces a report with its finding on drug residues in milk. The most recent one is the one for the year 2014. Want to guess the percentage of drug residue in pasteurized milk and milk products?

That’s right. Zero milk products were found with residues above the tolerance level.

Regular milk may contain residue from antibiotics, it’s just that this residue is below the tolerance level.

So let’s get back to the article about natural vs. synthetic food. In this article we covered that it’s all about the dose! Any substance can be good in some doses, bad in some others. Even vitamin C is bad if taken in big quantities.

Same is true for antibiotics, and that’s exactly why there’s a tolerance level. And the news is superb – all 100 percent of pasteurized milk is safe!

Where can I learn more about drug testing of milk?

If you’ve ever watched TV, then you might have learned about the “evil” growth hormones. These are hormones injected in cows in order to make them grow faster and produce more milk. I say “evil” not because they’re evil, but because they are presented as evil.

First, what is a growth hormone? According to the FDA “Growth hormone is a protein hormone produced in the pituitary gland of animals, including humans, and is essential for normal growth, development, and health maintenance.” We’re talking about estrogenic growth hormones that have the potential to increase milk supply usually 10-15 percent.

First, let’s start with how “dangerous” these hormones really are.

By contrast, one birth-control pill, taken daily by over 100 million women worldwide, contains 35,000 nanograms of estrogen. That’s equivalent of eating 3,431 lbs of beef from a hormone-implanted animal, every single day. To put it another way, it’s the annual beef consumption of 59 adults. Doesn’t that put it into perspective?

If birth-control is a sensitive subject, let’s compare it to vegetables: one 8-oz serving of cabbage = 5,411 nanograms of estrogen, over 1,000 times more estrogen than the same serving size of steak from a steer given a hormone implant.

The FDA has been asking these questions about IGF-1 since the 1990s and has concluded that there is no appreciable risk for consumers.

Where can I learn more about growth hormones in milk?

Organic Milk Vs. Conventional Milk Growth Hormones Verdict: I didn’t find any documentable risks from growth hormone in milk. Plus, most regular milk doesn’t have any traces anyway since cows are not treated with it. So I have to call it a tie.

Originally I was under the impression that organic milk comes from really happy cows, you know the ones that roam freely in the fields, eating grass and sleeping under the sun.

However, organic certification doesn’t require either full-time pasture access, more space for the animals, or better animal practices. The only requirement is that farmers allow cows and other ruminants to graze for at least 120 days a year. That’s it.

As for conventional milk I couldn’t find any welfare-specific guidelines. I did read that especially in good climates they get a lot of pasture time, however I didn’t find any strict rules.

Unlike the horror stories most of us have heard about animal abuse, animals, esp. cattle, are well-treated and animal welfare standards are high for both organic and conventional dairy farms.

Organic Milk Vs. Conventional Milk Animal Welfare Verdict: The only relevant guideline for organic milk was grazing for a minimum of 120 days a year. I’m not sure what the length is for cows producing regular milk. Hence, I’ll have to give this win to organic milk.

What you should know though is that the quality of the milk depends heavily on multiple factors, irrelevant to the organic vs regular farming practices. According to a 2015 review study in the Journal of Dairy Science:

A main complication is that farming practices and their effects differ depending on country, region, year, and season between and within organic and conventional systems. Factors influencing milk composition (e.g., diet, breed, and stage of lactation) have been studied individually, whereas interactions between multiple factors have been largely ignored.”

Now we like omega-3 fats because they help protect against heart disease and may decrease the risk of depression, stroke, cancer and other diseases. So based on this knowledge we should conclude that organic milk is superior, right?

Second, these quantities are not meaningful. Just to put things in perspective: You’d have to drink 5.5 gallons of full-fat organic milk to equal the omega-3 content of one eight-ounce piece of salmon.

Organic Milk Vs. Conventional Milk Nutritional Value Verdict: There’s no evidence that one type of milk is better than the other.

Based on the above my personal decision is to ditch organic for good. Now let me turn this 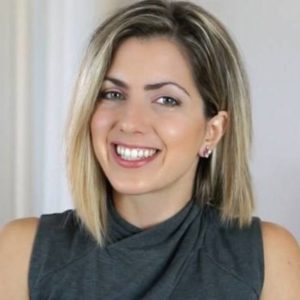 back to you. What milk are you buying? Why? Leave a comment and let me know.

A version of this blog appeared originally at Fitness Reloaded under the title “Organic Milk Vs. Regular Milk: Why I’m Ditching Organic,” part of the What Should We Really Be Eating? series.

Maria Brilaki is a Stanford Engineering grad, a best-selling author, and the founder of Fitness Reloaded, where she helps over 100,000 monthly readers make better, healthier choices. For evidence-based health & fitness advice, plus a dose of humor follow her on Facebook here.