Many people believe that genetically modified food (GMOs) can cause a host of diseases and disorders such as alzheimer’s, autism, and cancer. But does science support this?

In Food Evolution, which premiered at DOC NYC on Saturday, director Scott Hamilton Kennedy explores this controversial topic. One thing everyone can agree on is that we must have access to an abundance of healthy and affordable food that is grown sustainably. In this documentary, Kennedy and a team of scientists present the argument that this can be achieved through advances in science, including genetically engineered food. 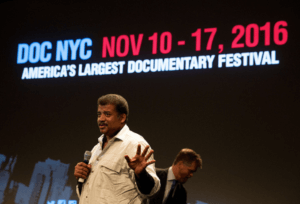 How do we know what to believe? It’s such a personal issue for people as they try to protect their health and the health of their families. “GMOs are not about GMOs,” said food writer Nathanael Johnson in the film. “It’s about our relationship to food.”

Renowned scientist Neil deGrasse Tyson, who narrates Food Evolution, said after the screening, “Science is true, whether or not you believe in it.” He went on to say, “If people knew how to understand and process data, and think about it, we wouldn’t even need this film.”