Myth busting: Is agricultural pesticide use in the US, and its impact, going down or up?

In recent years, the overwhelming evidence supporting the safety of GMO crops–hundreds of international agencies of note have issued reassuring reports addressing various concerns–has led to a change in tactics by anti-GMO activists and technology skeptics. They now focus their attacks on what they call “corporate” or “industrial agriculture”. The central sin of modern farming, they claim, is the increased use of chemicals, including pesticides and synthetic fertilizers, that were the rocket fuel for the Green Revolution.

All technologies have trade-offs, which the Luddites made clear in the early 1800s, when they vehemently opposed and tried to obstruct the industrial revolution on the grounds that it was disrupting idyllic rural life. Industrialization was brutal at times, with many collateral victims, and  there is a powerful argument that the concerns of the poor and working class were largely ignored.  But the Luddites were not looking to reform the process; they were pure obstructionists. Viewed then as “progressives”, they are now seen as the classic example of how good intentions can be twisted to support an anti-science, anti-progressive agenda. Today, no one questions the wisdom of pursuing industrialization, despite the hard knocks.

Which brings us to the loud, but vocal minority of anti-GMO activists. Their leading spokespeople, like Indian philosopher Vandana Shiva, decry the Green Revolution, claiming it is a chemical-created leviathan destined to sink. She and many American and European-based environmental groups offer a vision of the future of farming that looks remarkably like a mythical, romanticized past: chemical-free farms, with small farmers working close to nature. To them, all farm chemicals, and particularly one–glyphosate–are dangerous, even evil. 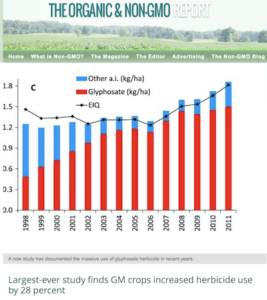 One of their central attack memes is the herbicide glyphosate, which the US EPA, European Food Safety Authority, Health Canada, European Commission and other independent bodies have determined is not carcinogenic and is safe and effective as used. GMO opponents contest that. They say the increased use of herbicide resistant crops, which are not harmed when sprayed with weed-killing glyphosate, has led to an increase in chemical usage.

That claim can be found in anti-GMO activist sites through out the Internet. Here is a recent post by the Non-GMO Report, which arrived at its conclusion based on a study led by University of Virginia researchers and billed as the “largest ever study on herbicides.”

Has herbicide use increased since the advent of genetically modified crops?

It turns out that the Non-GMO report, and most activist websites, cherry-picked the findings. The study found that from 1998 to 2011, farmers who grew GM soybeans use 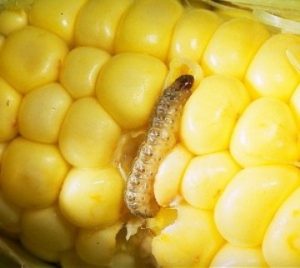 From this, the Non-GMO Report came to its clearly wrong, declaratory conclusion:

GM soybeans “correlated with negative impact on the environment”

Anti-GMO ‘environmental groups’ are not the only ones to botch this nuanced issue. Even the University of Virginia’s own press release, “Largest-Ever Study Reveals Environmental Impact of Genetically Modified Crops,” failed to apply the environmental impact algorithm in summarizing the findings of the researchers’ numbers, highlighting the 28 percent figure that was gleefully echoed through cyberspace by anti-GMO groups. 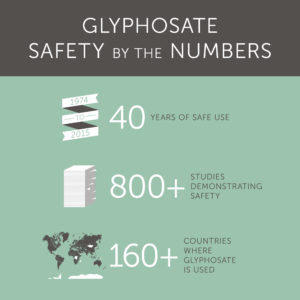 And the reason for the difference in numbers between the EIQ and non-EIQ? According to the study, it was due to “the relatively lower EIQ values for glyphosate.”

The Non-GMO Report’s distorted interpretation of the study echoes the environmental groups’ reactions to an herbicide use study by former Washington State University professor and GMO opponent Charles Benbrook. Benbrook, whose study was funded by the organic industry (read GLP profile of Benbrook here), published a report in 2012 that simply looked at the increased volume of glyphosate used since GMO crops were introduced.

His study caught the attention of activists because it highlighted those increases. But as GLP executive director Jon Entine noted in his analysis of the Benbrook paper, it did not take into account the toxicity of glyphosate compared to other herbicides. Nor did it look at the relative toxicity of genetically engineered Bt corn versus insecticides (which Benbrook did show as decreasing in use at the same time Bt use became more widespread). Carey Gillam, then a reporter for Reuters and now doing public relations for the anti-GMO group at US Right to Know (an NGO funded by the organic industry), promoted the deceptive take on the results in an article picked up by newspapers around the world.

U.S. farmers are using more hazardous pesticides to fight weeds and insects due largely to heavy adoption of genetically modified crop technologies that are sparking a rise of “superweeds” and hard-to-kill insects, according to a newly released study.

Genetically engineered crops have led to an increase in overall pesticide use, by 404 million pounds from the time they were introduced in 1996 through 2011, according to the report by Charles Benbrook, a research professor at the Center for Sustaining Agriculture and Natural Resources at Washington State University.

The Benbrook study provides a misleading picture of farm pesticide use in the United States. For example, an analysis of USDA data by University of Wyoming professor and weed expert Andrew Kniss shows there has been an increase in the 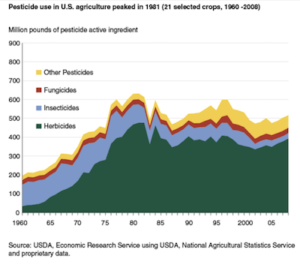 number of herbicides being used in wheat and rice, which have no glyphosate-resistant varieties.

The overall conclusions also conflict with data from the USDA, showing a different pattern of pesticide adoption. According to the Agricultural Research Service, all pesticide use peaked in the US in 1981, and has been in a general decline ever since. This decline is attributed to a number of factors, including the use of GM crops, including insect resistant varieties, as well as other crop, soil and pest management strategies. There has been a slight uptick since 2000–caused by numerous factors–but the overall trend and the environmental impact of pesticide use shows clear declines.

Real problem for recent rise—resistance of the natural kind

In February 2016, Kniss reported on his review of pesticide diversity and resistance. He found that 16 varieties of herbicides used on corn or soybeans had the same locus of action — this means that a bug or weed that can start resisting at that locus will resist any and all pesticides that act on that site. So, diversity needs to come from chemicals or other mechanisms that use a greater variety of sites of action. Kniss wrote:

I’ve expressed heavy skepticism in the past that herbicide diversity alone can ‘fix’ the problem of herbicide resistant weeds. It is going to take a broad view of weed management diversity, including mechanical and cultural weed control practices, to really minimize the problem of herbicide resistant weeds. We need to think much more about non-herbicide weed control practices. But it is also naive to think that herbicide diversity (in the form of mixtures and rotations) will play no role.

In October 2016, Kniss and colleagues published a study affirming that herbicide use had increased, but the toxicity dangers that come from herbicide use had fallen. And that’s thanks to glyphosate. Kniss’ found:

When it comes to assessing hazards, the type of chemicals matters as much, if not more, than the volume used.