[Editor’s note: This is part one of a two-part series on sustainable farming. Read part two, Farms are not like Eden: The case for aggressive human intervention in agriculture, here.]

Behind many efforts to make agriculture more sustainable is the idea that our farming systems need to be more like nature. According to agroecologist Miguel Alteri, “By designing farming systems that mimic nature, optimal use can be made of sunlight, soil nutrients, and rainfall.” This strategy arises from a long history of thinking that there exists a “balance of nature.” This idea has greatly influenced how we look at nature and agriculture. In the latter case, it drives much of what is done in organic farming and agroecology, but also finds its way into no-till farming. Nonetheless, it is false, and because it is false we can abandon the restrictive “nature knows best” argument in designing agricultural systems. Instead, we can improve on nature.

The “balance of nature” view and it derivations assume that ecosystems, as integrated communities, maintain themselves in an equilibrium if undisturbed by man. The equilibrium is maintained through governing rules, emergent properties, and self-organization within ecosystems. These properties act not just on the local populations, but on wider communities. Pests, predators, prey, and herbivores are kept in check by complex interactions between species and by a specific mix of species (biodiversity).

It is by these processes and properties that ecosystems have come to be thought of as analogous to organisms, with their own immune systems and other self-regulating mechanisms. In this model, every species has its function, and every interaction is essential for maintaining the overall working balance of the ecosystem.

Such thinking can be traced back to ancient Greece, and was supported by notable ecologists like Eugene P. Odum in his Fundamentals of Ecology (1953), but there have been critics. Henry A. Gleason (1882-1975) rejected the “super-organism” description of plant communities and instead suggested that the makeup of these communities was greatly influenced by chance events, which, within a locale, could result in very different communities; there was no balance, no climax state toward which all of the communities moved.

Other critics have been more forceful. Conservation biologist Michael Soulé writes “the idea that species live in integrated communities is a myth.” Ecologist William Drury, in his studies of forests, found no support for emergent properties, governing rules, or integration. In his book, The Balance of Nature; Ecology’s Enduring Myth, ecologist John Kricher states it bluntly, “there really is no such thing as a ‘balance of nature.’ Nor is there purpose to nature.” Evolutionarily speaking, Kricher points out, ecosystems do not evolve; they change because organisms change.

In addition to being false, the whole idea of the “balance of nature” is misleading. From it has come the view that ecosystems are a highly complex, integrated system of interactions between species, complexity that is beyond our understanding. The evidence, however, points to different conclusions. Drury reports “once seen, most of the interactions are simple and direct. Complexity seems to be a figment of our imaginations driven by taking the ‘holistic’ view.” Similarly, because ecology (at least until recently) has maintained that “natural communities tend towards equilibrium” Soulé concludes “the science of ecology has been hoist on its own petard.” In other words, ecologists have been misled by erroneously seeing what they assumed they would see.

Related article:  Viewpoint: ‘Untold human death and suffering’: What could be the impact of the Trump administration plan to reach herd immunity 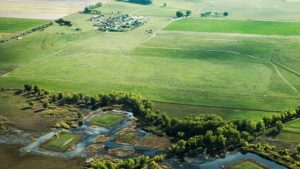 Even as ecologists have, for the most part, abandoned the “balance of nature” thinking, it remains influential in popular thought and in agriculture. R. Ford Denison, in his book Darwinian Agriculture, takes up this thread and asks the question, “Have ecosystem-level features, such as the mix of species and how they are distributed in space and time, been reliably improved by natural processes?” The answer is “no” according to Denison; natural communities have not been optimized and so we have no reason to mimic these communities in designing agricultural ecosystems. Because of this, Denison questions whether agroecologists, those for whom “the near-perfection of natural ecosystems is apparently the foundational hypothesis,” are misguided in promoting certain practices based on this thinking. The evidence, according to Denison, does not support them.

In Darwinian Agriculture, Denison concludes that because “evolution has improved trees much more consistently than it has improved forests,” we will find ‘nature’s wisdom’ not in natural ecosystems, but in individual species, where natural selection has improved survival and reproduction. And by looking at adaptations in individual plants and animals, “we may be able to improve on nature.”

I agree. If what we see in natural ecosystems is not optimized, but random (stochastic, say the ecologists), we should be able to do just as well or better. We can, with ingenuity, wisdom, and a good dose of humility, purposefully assemble systems that outperform natural ecosystems in providing both products and ecosystem services. By taking advantage of individual species’ properties and processes, and by managing abiotic conditions (soil physical and chemical properties and water levels, etc.) we can create designer agro-ecosystems, successful by criteria that matter in agriculture; productivity, efficiency, and stability. I propose that this is, in fact, what we have been doing all along (more on this my follow-up post), and that the “balance of nature” has only been a distraction from our efforts to improve the sustainability of our agriculture, a distraction that should be decisively cast aside.

A version of this article originally appeared on Washington State University’s Center for Sustaining Agriculture and Natural Resources’ website as “Don’t Mimic Nature on the Farm, Improve it” and has been republished here with permission from the author.

Andrew McGuire is an agronomist at WSU’s Center for Sustaining Agriculture and Natural Resources. He has also worked for the University of Nebraska Cooperative Extension and the Natural Resources Conservation Service in Western Colorado.