The science of GMOs, so far, is well established. After twenty years and thousands of studies, no credible researcher has found any health effects that have been linked to the consumption of genetically modified crops. Studies that have raised some questions, such as those by Gilles-Eric Seralini or Judy Carman, have been debunked on methodological grounds. Therefore, the issue should be resolved, the consensus as clear as the effectiveness of antibiotics against bacterial infections—the science says no harm, no foul, so everybody’s cool, right?

Wrong. The rhetoric of anti-GMO proponents as Joseph Mercola, Jeffrey Smith, Natural News, and activists at Greenpeace and Consumer Reports, among advocacy NGOs, would have you believe that genetically engineered foods can give you cancer, reduce biological diversity, and spike the use of dangerous pesticides. Natural News head Mike Adams garnered a headline or five when he publicly equated supporters of GMOs with those who collaborated with Nazis. Meanwhile, anti-GMO activist philosopher Vandana Shiva simply asserted that “GMOs are about appropriating life.” Among true believers, it doesn’t seem to matter that none of these claims have any basis in fact. Presenting hard science doesn’t make much of a dent.

Why? It’s because of the way we’re wired to handle risk, a number of psychologists and sociologists contend. In Europe, consumers who at first purchased genetically modified Flavr Savr tomatoes with enthusiasm lost their zeal for the fruit after media reports and environmental activists seized on flawed studies about genetically modified crops. Concern in Europe and the United Stakes spiked and remain high after a high profile study by Seralini accompanied by scare pictures–despite the fact his paper was withdrawn (though later republished in a pay-for-play journal) and the pictures shown to be misleading.

This and other stories about “risky” new technologies feed concerns about GM foods because humans generally don’t trust new things. A paper published in April 2015 in Trends in Plant Science showed three key cognitive processes that can make it easy for us to distrust GM food.

Foods that contain additives, processed ingredients or any other food that results from human intervention are seen as less desirable (and less healthy) than foods that are in their “native” form. So, a fresh apple is better than an apple cobbler. And, genetically modified corn is therefore not better than one that was grown conventionally. The fact that conventional corn also has been modified over the millennia is irrelevant to the “natural” point of view—what’s important is that the conventional corn is in a previously established, and therefore more “natural” state.

Related to the “natural” fallacy, this idea tells us that any species, from dogs to bananas to goats to eggplants, is fixed and unchanging. Of course, evolution tells us that species change as quickly as a cell divides, but “essentialism” tells us that DNA somehow doesn’t change much, and determines the basic “being-ness” of an organism. So, it would be very wrong to insert a gene that ultimately expresses vitamin C into corn DNA (which, incidentally, is exactly how three quarters of Vitamin C is made).

Here, the authors found that anti-GMO messages could easily find fertile audiences when GMO mixing was characterized as “contamination,” implying then that they could introduce disease, sterility, environmental issues and so forth.

“Anti-GMO messages strongly appeal to particular intuitions and emotions,” said Stefaan Blancke, a philosopher at Ghent University in Belgium and lead author on the paper. “They tap into our intuitions that all organisms have an unobservable immutable core.”

Related article:  Magic and morality: Why some consumers are afraid of GMOs

Intuition can be a good thing. It can keep us from doing something dumb. In most of our awake moments, we do things without being conscious of them. Christof Koch, a neuroscientist at CalTech, called this state of being the “Zombie state,” and has found that most of our thoughts and actions are done without us having given them so much as a “how do you do.” So, we automatically avoid an obstacle in the roadway. Or, feel uncomfortable when presented with something we see as new. Like GM food. 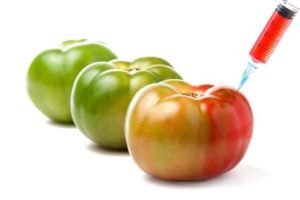 And the anti-GMO activists’ messages show how easy it is to exploit our fall-back reliance on intuition and emotions in making key decisions. It’s a lot easier for Natural News to shout “Nazi!” or “cancer” than it is to explain how transgenic Bt corn actually works. Changing emotional beliefs and attitudes is very difficult–but creating those attitudes can be all too easy.

The Trends in Plant Science findings, then, aren’t particularly new or surprising. But scientists are looking at more about how we evaluate risk, and how to find ways to manage risk as a conscious, civilized society, instead of as an intuitive, reactive lizard.

The psychologist Paul Slovic, known for his decades of work on perceptions of and reactions to risk, points to three things that can impede our ability to think clearly about new technologies like GMOs:

Thanks to the work of Yale University law professor (and another expert on risk assessment) Dan Kahan, we can add a fourth item to Slovic’s list: In what context did we learn about the new technology?

Kahan suggests that we judge new ideas based on what people who we share other views, and who we respect, think about those issues. As humans are social creatures, we tend to surround ourselves (intuitively as well as consciously) with people who share our views, emotions, outlooks and ways of handling new facts.

“People misinform themselves,” he said. “People judge new information based on their group’s belief. Therefore, there is a demand for misinformation.”

And, Kahan points out, this hunger for disbelief “pollutes” the communication of what should be rational, fact-based science, because there are many organizations and institutions (such as anti-GMO organizations or floating yoga instructors) waiting to fill the emotional gap.

In this video, Kahan addresses the psychological and social issues that impact decision making (he doesn’t address GMOs until the very end):

So, once a fear of GMOs is embedded, how do you get rid of it?

Kahan suggests that a new generation of Americans (and Europeans, Asians, and Africans) will soon have grown up accustomed to reading about and consuming genetically modified food. For them, it won’t be new. For them, the fear will have ebbed. And protesting against GMOs will no longer be “cool.”