The goalposts of embryo ethics have shifted. Just two years ago, a Chinese study testing whether CRISPR-Cas9 genome editing could be used to cure beta thalassemia in human embryos was getting negative critiques. As quoted by Gina Kolata in a New York Times last June, a comment by Nobel laureate and former Caltech president David Baltimore illustrates the magnitude of the criticism:

“[The study] shows how immature the science is. We have learned a lot from their attempts, mainly about what can go wrong.”

Despite the criticism and disappointing results, it’s noteworthy that the researchers were careful to destroy all the embryos before they reached a gestational age of 14 days. Doing otherwise would have created an ethical dilemma, because going beyond 14 days would have taken the work outside of guidelines in place in all countries where such research is technically possible. But change may be in sight. Last week, Harvard genetic engineering pioneer George Church and colleagues published a thoughtful paper in eLife, Addressing the ethical issues raised by synthetic human entities with embryo-like features. It’s a lengthy discussion, but the take-home message is that may be time to discard the so-called 14-day rule.

As the Chinese researchers themselves pointed out, only a fraction of the embryos ended up with the genetic payload in their cells, so the technique was not adequately efficient. Furthermore, there was mosaicism: In several embryos that did get modified genetically, the change showed up in some cells, but not others. In other words, some embryonic cells were of the original, thalassemia genotype and the remainder were corrected. There also were off-target effects — unintentional changes in other parts of the genome. All of this illustrated the potential danger of editing an entire organism, and germline editing, what is sometimes called heritable gene therapy — changing genetic sequences that can be passed down to new generations. This meant that CRISPR, in its current form, was not reliable for correcting genetic diseases during pregnancy.

But none of this means the research should not have been conducted. For safety, the researches used human embryos that were not viable; they contained extra chromosomes, so it was not possible for them to develop into actual people. And of course, the team followed the rule about the 14 days.

As we shall see later, there is nothing magical about the 14-day mark in human embryology. But virtually every country with biotechnology advanced enough to maintain embryos outside the body has guidelines dictating that embryo research must not continue to gastrulation. This is the point when a blastula, consisting of a single layer of identical cells, reorganizes into a gastrula, consisting of three layers of cells, each of which will become a different kind of tissue. Gastrulation starts on day 15 with the appearance of what’s called the primitive streak. This is the beginning of a head-to-tail orientation and over the past four decades some have given it a kind of moral status. This didn’t matter much to science through the 1980s and 90s, because there was no technical capability to maintain human embryos in the lab more than a few days beyond fertilization. But things have changed. Today, researchers can maintain embryos right up through 14 days in Petri dishes. It’s only on account of laws and guidelines that they don’t go further. But doing so could have benefits, both for science and medicine. The question is whether things might change, now that a high profile genetics researcher has come forward advocating a more nuanced approach, rather than a simple cut-off point. 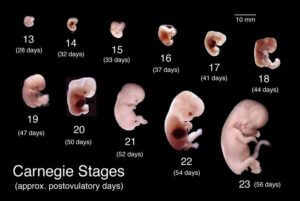 There is no scientific or cultural basis for giving moral status to gastrulation, and so the 14-day mark  is an arbitrary point. The rule traces its birth to 1979, when a board commissioned by the US Department of Health, Education, and Welfare sought a compromise position between scientists and social conservatives.

Soon after that, it was recognized that twinning — splitting an embryo into two or more clones — could produce a viable pregnancy only if it occurred before the primitive streak appeared. This presents a conflict for those religious people concerned with the issue of “ensoulment” — the point at which a “soul” is believed to enter embryo. What happens to the soul of an embryo that splits into twins is relevant on to somebody who believes that ensoulment occurs in the early phase of development. However, religions that worry about souls don’t don’t align on the matter pertaining to embryos. In Islam, ensoulment occurs fairly late pregnancy, 120 days gestation being a commonly cited point. In Hinduism, the soul moves around between different animals, so there is no worry about it being created and split. Various Christians disagree on the timing of ensoulment, and in Judaism there is no talk of souls or ensoulment in connection to human development.

On top of this, there are vast numbers of purely secular-minded people throughout the world, for whom the embryo ethics is less about rights of potential human beings and more about the potential of embryo-based research to create new treatments for disease that make people suffer. Nevertheless, the main idea of the 1979 guideline has spread throughout the developed world, where current restrictions on embryo research vary from country to country, but still use gastrulation as the cut-off point.

Related article:  How will we use gene editing to treat human disease?

The new paper by Church and his colleagues at Harvard and the University of Groningen calls for a nuanced discussion. They talk about special individual stem cells — called synthetic human entities with embryo-like features (SHEEFs)– available to researchers that can generate the same developmental features that are attributed to a developing embryo. They think this should be the basis of future regulations. In their words:

Our proposal to base research limits for SHEEFs directly on signifying features is based on the inference that, given the engineering methods used to create SHEEFs and their potential for developmental plasticity, revising limits in this way will be the only workable way to prevent the creation of SHEEFs in morally concerning conditions. But non-synthetic embryos go through the PS stage routinely and are not generally developmentally plastic in this way, so this conclusion does not follow. A more secure conclusion would be that, if for independent reasons the revision of the 14-day rule for embryos is justified, the considerations we have outlined for SHEEFs might be relevant to what new limit might replace it.

It already has people arguing in the comments section, and that discussion is expanding. On the Scientific American blog, for example, journalist Karen Weintraub quotes a handful of people from a range of perspectives:

What will happen if guidelines are relaxed? As explained in a New York Times OpEd piece last June, even discussing this will start a debate that pits scientists against religiously motivated people, which in this case means mostly fundamentalist Christians:

This technological advance has reopened the ethical debate about the 14-day limit. Many scientists chafe at restrictions on their ability to learn more about life and potentially create breakthrough therapies. Critics, especially religious believers, are horrified because they believe that, in the words of Philippa Taylor, head of public policy at the Christian Medical Fellowship, all embryos are “very young human beings.”

As discussed in the last section, the belief that embryos are people is limited to Christianity, which must be placed in context of a diverse society that includes more liberal Christians, as well as Jews, Muslims, people of eastern religions, and millions of non-religious people. But if the history of stem cell policy and abortion serve as models, we can expect plenty of sanctimony and arguments rooted in questionable assumptions that the extreme Christian view represents some kind of universal ethics.

Where do we go from here?

In the UK, where the first in vitro fertilization baby was born in 1978, the 14-day limit is more than a guideline. Rather, it is a strict rule, but since January it has been in the spotlight. In contrast with George Church, a handful of researchers are calling for a simple pushing back of the limit from 14 days to 28 days.

Now lets consider the long-term. Unlike in 1979, scientists today have the technical means to study embryos well into the period when different tissues and organs are forming, with potential science and medical benefits. Such benefits could come in the form of new treatments in regenerative medicine, since researchers could observe the precise genetics, cell biology, and chemistry of specific tissue and organ genesis. Progress toward an artificial womb. also would be accelerated. Furthermore, such studies could reveal the molecular biology underlying pregnancy loss through spontaneous abortion. Often these events are labeled as miscarriages, but many occur at very early gestational ages, before the woman even knows that she is pregnant. Thus, ironically, research on human embryos could end up saving fut I justure embryos from what happens when nature runs its course.