Seeing patterns that aren’t there? Understanding how the brain forms opinions — And implications for science

So wrote the best-selling author-neurologist Oliver Sacks, who died in August 2015 at the age of 82. The quote is from Musicophilia: Tales of Music and the Brain, was one of his later books, published in 2007 (his second book, Awakenings (1973) has been his best-known work since it was transformed to a feature film in 1990), but it spells out an underlying theme from all of this books. Sacks authored more than a dozen of them, most exploring the brain, consciousness, and awareness. He created narratives and lessons founded on neurology cases.

One famous case formed the bases of Sacks’ 1985 best seller The Man Who Mistook His Wife for a Hat, which later became an opera. Sacks actually described several fascinating cases in the book, including a former sailor who, during the 1970s and 80s, could remember nothing since the end of World War II. Like the protagonist Lucy in the 2004 film 50 First Dates, played by Drew Barrymore, the sailor lost his ability to store new memories, so everything that happened since 1945 had to be retold to him, over and over. But the title case of the book was about a man with visual agnosia. A brain area needed to recognize faces was wiped out, but he still remembered what a hat looked like and that’s where the mind’s creative ability comes into place. Essentially, the mind fills in the dots, and it doesn’t happen only when something in the brain is wiped out. It also happens in normal brains.

A well known pearl of wisdom that I heard in medical school goes like this: You learn neurology stroke by stroke. By seeing how people change when specific parts of the brain are damaged, scientists have mapped the brain in terms of function. The quote from Sacks’ Musicophilia applies to people with brain lesions, because the rest of the brain, the undamaged part, can put images together from what’s left.

But in normal brains, there’s a phenomenon called pareidolia. The mind perceives a familiar pattern, even though it’s not really there. The phenomenon does not really include when we use patterns that are recognized universally, for instance the constellations in the stars. When it comes to the most distinct constellations, different cultures around the globe have all seen them. Pretty much all cultures have put names the constellation that in our culture we call Orion, and particularly in the line of three stars that we call Orion’s belt. They’ve all noticed the Big Dipper in the northern sky that in our culture, and others, is actually merely part of a larger constellation, Ursa Major, the big bear. The pictures are not really out in space; the stars of each constellation are different distances from Earth, so they form shapes only when viewed in two dimensions of the night sky. Nevertheless, from a two-dimensional perspective, they patterns really are there, and seeing them does not qualify as pareidolia.

Related article:  Pregnancy, motherhood may give a boost to women's brains, making them 'younger'

So then, what does qualify as pareidolia? As with the constellations, pareidolia depends on the human mind connecting dots. But with pareidolia, most of the dots are not even there. In the Cydonia region of Mars, there’s an area of hills that was photographed from space in 1976 by NASA’s Viking space probes. The hills and the shadows that they leave come together in such a way that to the human mind it resembles a blurry face. It’s an unusual combination of structures, so to most humans it really does resemble a face. But some people see the face more distinctly than others do and that’s true even if they look at a later photo taken of the same area by the Mars Global Surveyor in 2001. The later picture is from a more advanced camera with much better resolution, and yet the “face” is way more blurry than in the earlier photo (inset in lower right), so blurry that to most people seeing it without first seeing the 1976 Viking photo. 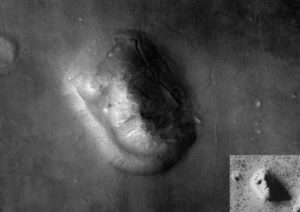 Moving along a spectrum, there are people who see faces and other familiar images in physical structures where most other people do not see the image at all. They see Jesus in their oatmeal, Elvis in their Rice Crispies, and a plethora of other images. Then the rest of us look at what they’re seeing and scratch our heads. Somewhere along he spectrum between the face-like shape in the earlier, less accurate Mars photo is the man on the Moon. It’s an illusion, due to craters, hills, seas (flat low-lying lunar regions) and shadows, and some humans see it and some do not.

So clearly there’s a range of capability among humans to create patterns when they aren’t there. Some are more imaginative than others, even if it’s unconscious in that they don’t realize that there’s no basis for what they’re seeing. This raises a question; if people tend to form visual images based on very scant amounts of visual information, do they also have a tendency to form conceptual ideas — in other words, to draw conclusions — based on a tiny number of data?

We don’t really know the answer, but the question certainly could lead to some interesting studies and the results could have implications for a range of policy issues that depend on accurate assessment of data. That range of issues could include genetic technology, vaccines and other issues, climate science, and pretty much everything else involving technology that’s at the center of public debate.