Glowing trees, no more colonoscopies and other wonders of synthetic biology

The world of synthetic biology can make many things possible. We could have trees that glow in the dark, eliminating the need for streetlights; probiotic nanobots that explore our intestines making colonoscopies obsolete; tire treads that regenerate; and photosynthetic animals. Think of the products as super-GMOs — requiring more than just a gene or two copied from one biological species to another. With synthetic biology, we can design novel life forms essentially from scratch. It’s playing Mother Nature and people –both scientists and amateurs– are already doing it in their labs, kitchens, garages, and dens.

Given the strong appeal of ditching colonoscopies and the ongoing push for more green technology, society may be ready to welcome this new biotech trend.

The key will be keeping these synthetic organisms out of the food supply. As we’ve seen with standard transgenic techniques and other gene-editing technologies, if you develop a product for human consumption, it will be rejected by elements of society. On the other hand, if synthetic biology can start improving the world outside of food, perhaps society will start to view biotechnology with more of an open mind, and eventually embrace it — even on the dinner table.

One of the main qualms that activists have with GM crops is that they are transgenic, that they contain “foreign genes.” Through marketing, anti-GM activists, aided by big corporations such as Whole Foods Market, have sold this rationale to a segment of the consumer population. The word “foreign” bothers people because it implies the gene is not supposed to be in its new host.

Consider the early 1990s attempt to create a tomato enhanced with a flounder gene to resist freezing. The tomato was given a gene from the fish that encoded a protein inhibiting formation of ice crystals. This anti-freeze protein has nothing to do with how the fish tastes. But for years the GM tomato has been an emblem of anti-GMO activists and articles crafted to win over consumers, at least partly with phrasing that implies there should be something wrong or dangerous using such a gene in this way. It’s fairly easy to find articles with titles like Waiter, there’s a fish in my tomato or articles like this one from an anti biotech site, saying “Monsanto gets caught adding a fish gene into tomatoes as consumers protest the company’s choices” – as if using a fish gene should be something a company needs to hide. By the way, the project was conducted not by Monsanto, but by a California-based company called Plant Technology, which soon went out of business.

Such articles circulate, because there’s a high degree of genetic illiteracy, as demonstrated by a poll in the Federation of American Societies for Experimental Biology Journal, in which 33 percent of respondents reported thinking that non-GM tomatoes “did not contain genes” and 32 percent said that “vegetables did not have DNA [unless modified with DNA from animals].”

The spread of these sorts of myths could be aided by a couple of factors. First, while a tomato that doesn’t freeze can have benefits for the global food supply, the typical consumer might not see this as a critical need. This is particularly true for well-to-do consumers, who may not feel an impact of a price increase resulting from freeze destruction of a crop. Second, when it comes to food, consumers are wary of technologies they don’t understand. People tend to be overly cautious when it comes to things they eat.

With synthetic biology, on the other hand, the degree of genetic manipulation is so dramatic that it does not even make sense to talk about ‘modification’. The word ‘synthetic’ is used, because researchers create novel life forms. They can do this by combining genes from many different organisms, or even by designing new ways to translate genetic sequences of genes into protein products. 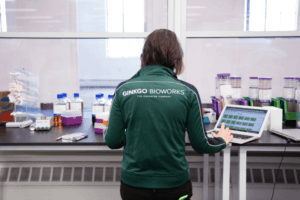 In synthetic biology, researchers are making a few things that can be ingested. For example, by merging genome segments from brewer’s yeast and orange trees, a company called Ginko Bioworks has created an exotic, citric-tasting beer. Ginko Bioworks is retaining the old term “GMO” –indeed, they are embracing it —  not only for the citric beer, but for a range of products that they’re making, including some that combine fragrances from rose plants with personal care products and cosmetics. The company prides itself on its “automated “factory” that produces GMOs in mass quantities.

The fact that many of these products are aimed toward high-end consumers may be keeping them off the radar of food activists. At the very least, they aren’t attracting the same level of attention given to glyphosate-resistant soybeans and other widely-used crops.

But synthetic biology may appear on the radar scope of ordinary people when they see it for its potential to improve their lives. Consider gastrointestinal diagnostics. Few people relish the idea of having a colonoscopy, but they do it because it’s effective for detecting colon cancer and other serious diseases when they are treatable. But imagine a genetically engineered bacterial species that you could consume in a tasty smoothy –essentially a high tech probiotic— that could detect inflammation and other problems in your colon. In the years to come, doctors may offer you versions of these GM microbes, new and improved and able to relay information from your gut — without having to go through the unpleasant experience of a colonoscopy.

Along with high-end products like rose perfume and beer, there is a plethora of potential synthetic biology products that aren’t food items. To confront both the energy and climate crisis, technology developers are trying to reduce our electrical needs, and biotechnology can help in this area. Within a few years, some cities may feature glowing trees in place of streetlights. 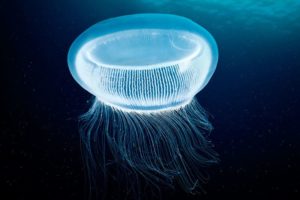 The idea utilizes fluorescent proteins, which enable bioluminescence — lighting produced in a biophysical process– in certain organisms. The most commonly used fluorescent protein is green fluorescent protein (GFP), which was isolated first from jellyfish. There also are red, orange, yellow, and cyan fluorescent proteins. One can purchase the genes that encode these proteins and put them to a range of uses. Commonly, they’re used to track developments in biology experiments. You can link them to an enzyme that changes under a particular environmental condition, for instance, or link the fluorescent gene to a gene for something else that you’re studying –let’s call it gene-X– such that any organism with a copy of gene X lights up.

Or, you could insert a GFP gene, or another fluorescent protein gene, into a cat or bunny genome, to create glow-in-the dark pets., or do the same with house plants, or a long, stringy plant like ivory to create biological Christmas lights that draw nothing from the electrical grid. What about doing this in trees plant them along streets and highways? That’s coming in the near future.