People frequently imagine intelligent, highly-evolved extraterrestrials as having big heads — perhaps to accommodate growing brains. Looking at lower parts of the body, wide hips as part of an hourglass figure were considered particularly beautiful back in the Renaissance and Baroque periods, whereas today it is common for men to be more attracted to women with slimmer hips. How are these stories about heads and hips connected?

The answer has to do with the birth canal. It’s size, and its relationship to that of the baby’s head, has been subject to competing evolutionary forces going back a few million years, when the brains of our hominid ancestors started to grow significantly as we diverted from the ancestors of apes. As cranial volume grew, natural selection led to the emergence of phenomena that helped newborns get through the birth canal without dying, or killing the mother. This included changes in the shape of the pelvis and lower back to widen the birth canal and a delay in the solidification of certain parts of the skull. The latter include a metopic suture (a soft connection between the right and left halves of the frontal bone) and an anterior fontanelle, the soft spot that you can feel on a newborn infant. In apes, these features seal up during fetal life, as they did in our ancestors, but closure is delayed for months after birth in humans, thereby allowing the brain to grow substantially after the infant has exited the mother.

Since there’s a limit to how much the skull can compress, natural selection has favored the maintenance of a wide pelvis for most of human history. Any woman unfortunate enough to have a pregnancy with cephalopelvic disproportion (CPD) –a fetal head too big compared with the width of the birth canal– would die, along with her fetus. Thus, the genes predisposing female infants to have a narrow pelvis were not passed down and CPD was very rare. But the ability to remove a fetus surgically changes the equation for CPD and in doing so it could be changing the human species.

Literature and history include scattered examples or rumors of babies surviving extraction from the womb without ability to rescue the mother. Shakespeare describes the character Macduff being  “untimely ripped” from the womb and thus not “born of woman” (Macbeth Act V scene viii), which is likely based on real-life examples. Surgical birth of the great Roman leader Julius Caesar is likely an urban myth, since his mother Aurelia is recorded to have been alive during Caesar’s adulthood (The word cesarean comes from  the Latin “caedare’, meaning ‘to cut’; the procedure was not named for Caesar).

The advent of the modern cesarean section (C/S) occurred in the early 20th century in association with extreme rapid development of surgical techniques, instruments, and other technology. This is depicted with surgical accuracy on the Cinemax television historical medical drama The Knick. One perfected C/S quickly became a viable option for responding to a range of pregnancy complications.

Related article:  We can identify 'bad' genes. Why can't we use CRISPR gene editing to get rid of them?

C/S is performed, for instance, when the placenta obstructs the cervix (placenta previa), when there is CPD, or when the mother is too ill to remain pregnant, or requires treatment that would harm the fetus (such as radiation therapy or chemotherapy for cancer) and cannot tolerate vaginal birth. There are other reasons, but when it comes CPD, evolution of the human shape really comes into the picture, because C/S enables survival of mothers and babies who would not be “the fittest” in a Darwinian sense. 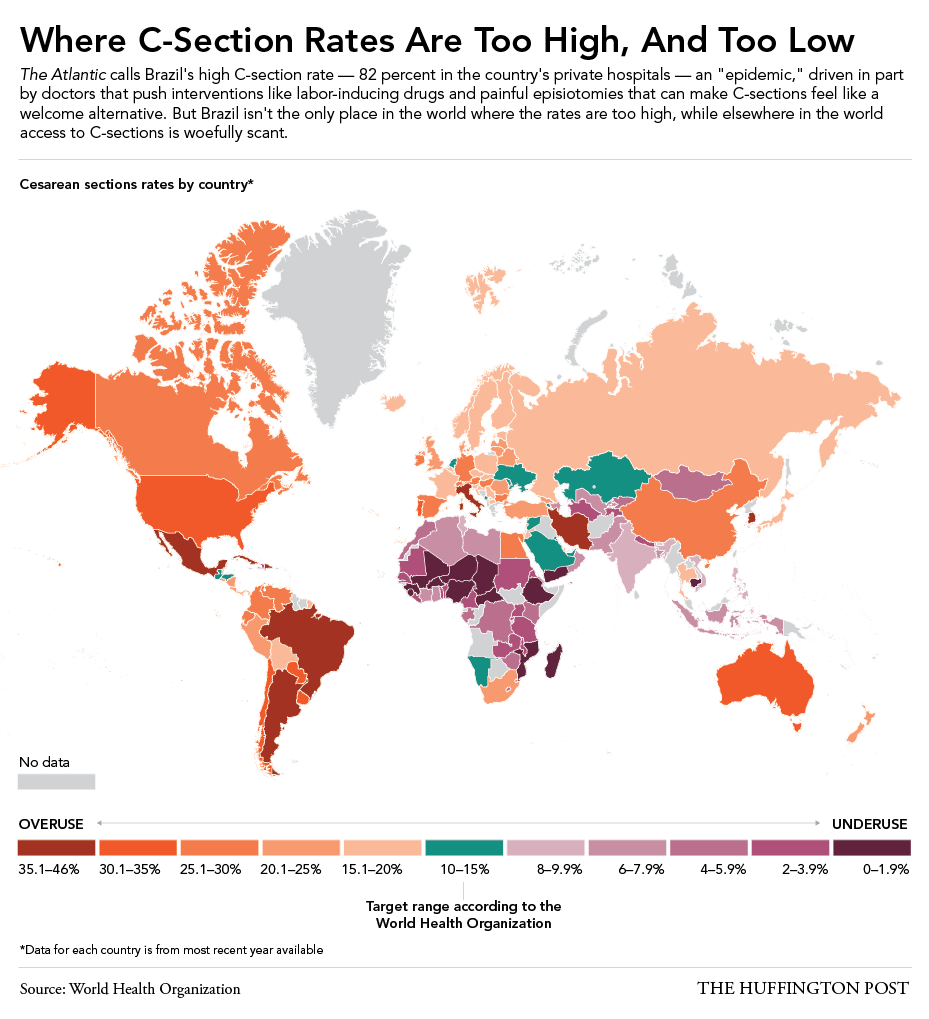 Since the 1960s, and especially since 1990, the number of children born by C/S has been increasing dramatically, such that that the ratio of surgical to vaginal birth goes as high as 40 percent in some countries. Recent study has revealed very high C/S rates in China, which is particularly interesting from an evolutionary standpoint given that China represents 20 percent of the human population.

Surgical birth from an evolutionary perspective

Discussions over high rates of Cesarean birth generally involve issues of medical effects on the child and mother as well as psychological factors, but what about humanity as a whole? Related to this question, recent study in Vienna has revealed that while C/S accounts only for 36 in 1,000 births worldwide, there has been a measurable increase in the incidence of narrow pelvis in human females. This means that simply performing a lot of C/S procedures can cause an increase in the incidence of CPD by allowing fetuses with the predisposing genetic make up to be born, and then not to die during childbirth, thereby enabling them have still more children with those genes.

C/S is thus literally reshaping the hips of human women and that’s on the global scale where vaginal birth is still the dominant way to deliver children. Considering the phenomenon in the context of countries and cities with very high C/S rates and the effects could be particularly dramatic. If that’s the case for the pelvis, what effects on the circumference of the human head might reveal themselves in the years to come?

David Warmflash is an astrobiologist, physician and science writer. Follow @CosmicEvolution to read what he is saying on Twitter