A new research paper is stirring up controversy among scientists interested in using DNA editing to treat disease.

In a two-page article published in the journal Nature Methods on May 30, a group of six scientists report an alarming number of so-called “off-target mutations” in mice that underwent an experimental gene repair therapy.

CRISPR, the hot new gene-editing technique that’s taken biology by storm, is no stranger to headlines. What is unusual, however, is a scientific article so clearly describing a potentially fatal shortcoming of this promising technology.

The research community is digesting this news – with many experts suggesting flaws with the experiment, not the revolutionary technique.

The research team sought to repair a genetic mutation known to cause a form of blindness in mice. This could be accomplished, they showed, by changing just one DNA letter in the mouse genome.

They were able to successfully correct the targeted mutation in each of the two mice they treated. But they also observed an alarming number of additional DNA changes — more than 1,600 per mouse — in areas of the genome they did not intend to modify.

The authors attribute these unintended mutations to the experimental CRISPR-based gene editing therapy they used.

A central promise of CRISPR-based gene editing is its ability to pinpoint particular genes. But if this technology produces dangerous side effects by creating unexpected and unwanted mutations across the genome, that could hamper or even derail many of its applications.

Experts in the field quickly responded. 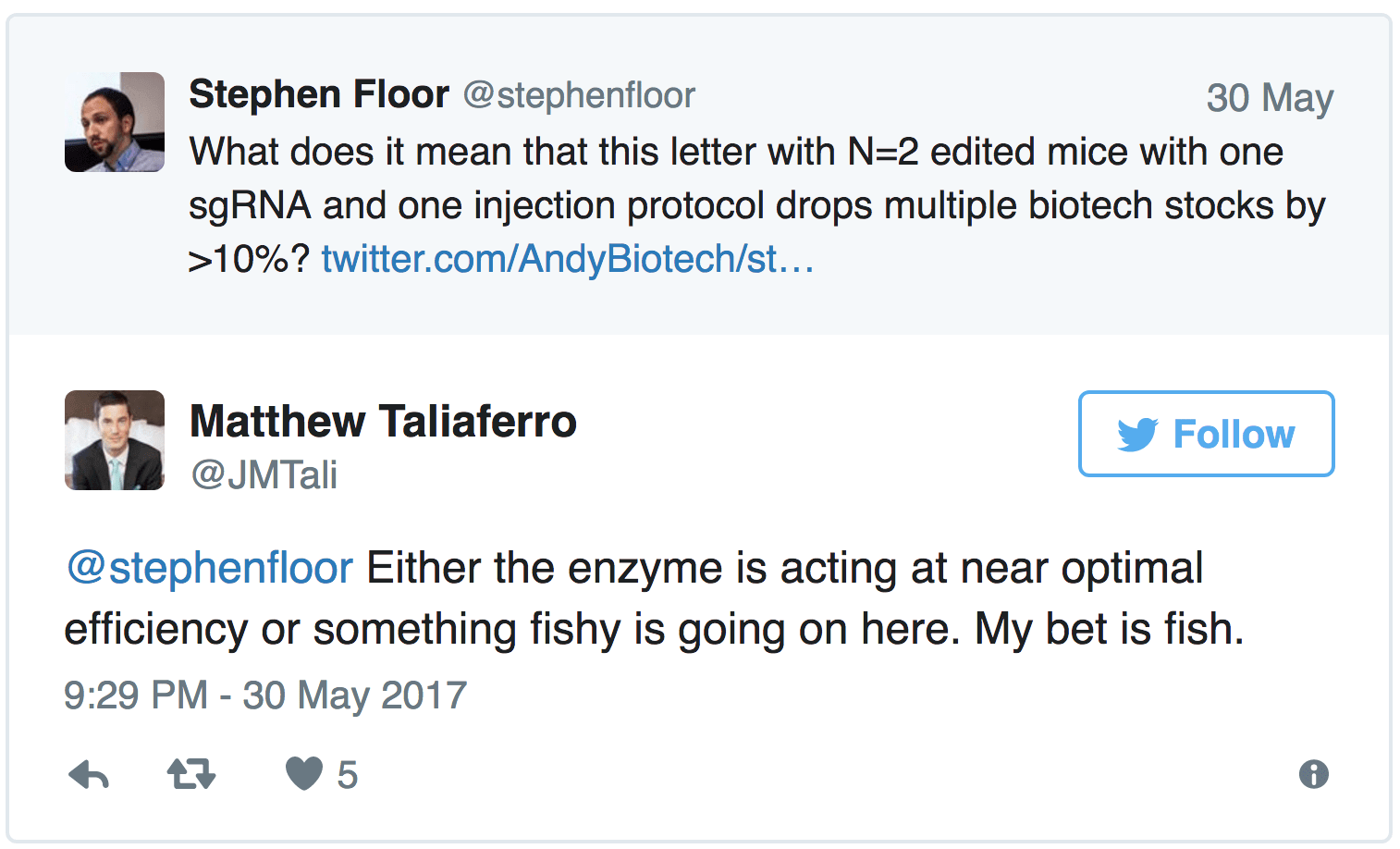 “Either the enzyme is acting at near optimal efficiency or something fishy is going on here,” tweeted Matthew Taliaferro, a postdoctoral fellow at MIT who studies gene expression and genetic disease.

The Cas9 enzyme in the CRISPR system is what actually cuts DNA, leading to genetic changes. Unusually high levels of enzyme activity could account for the observed off-target mutations – more cutting equals more chances for the cell to mutate its DNA. Different labs use slightly different methods to try to ensure the right amount of cuts happen only where intended. 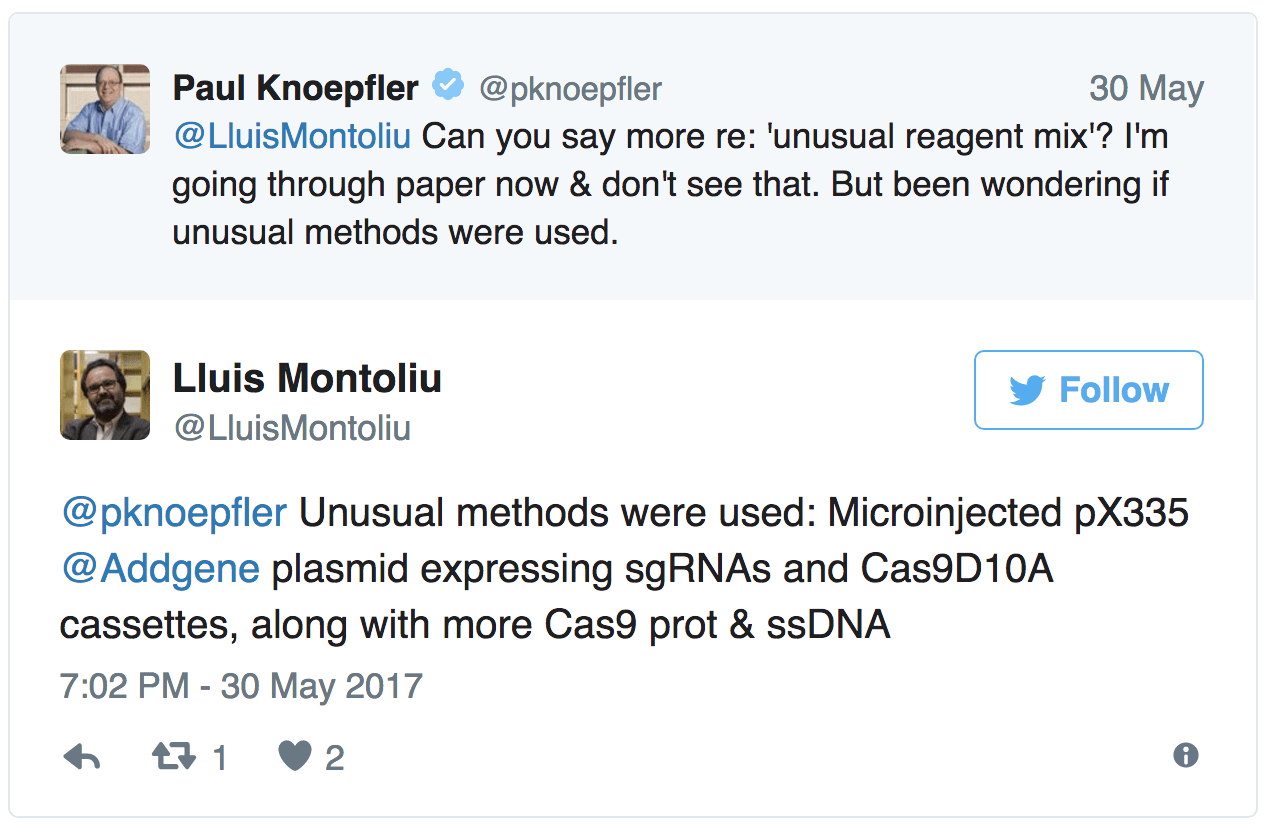 “Unusual methods were used,” tweeted Lluis Montoliu, who runs a lab at the Spanish National Centre for Biotechnology that specializes in editing mice genes using CRISPR. He believes the authors used suboptimal molecular components in their injected CRISPR therapies – specifically a plasmid that causes cells to produce too much Cas9 enzyme – likely leading to the off-target effects they observed. 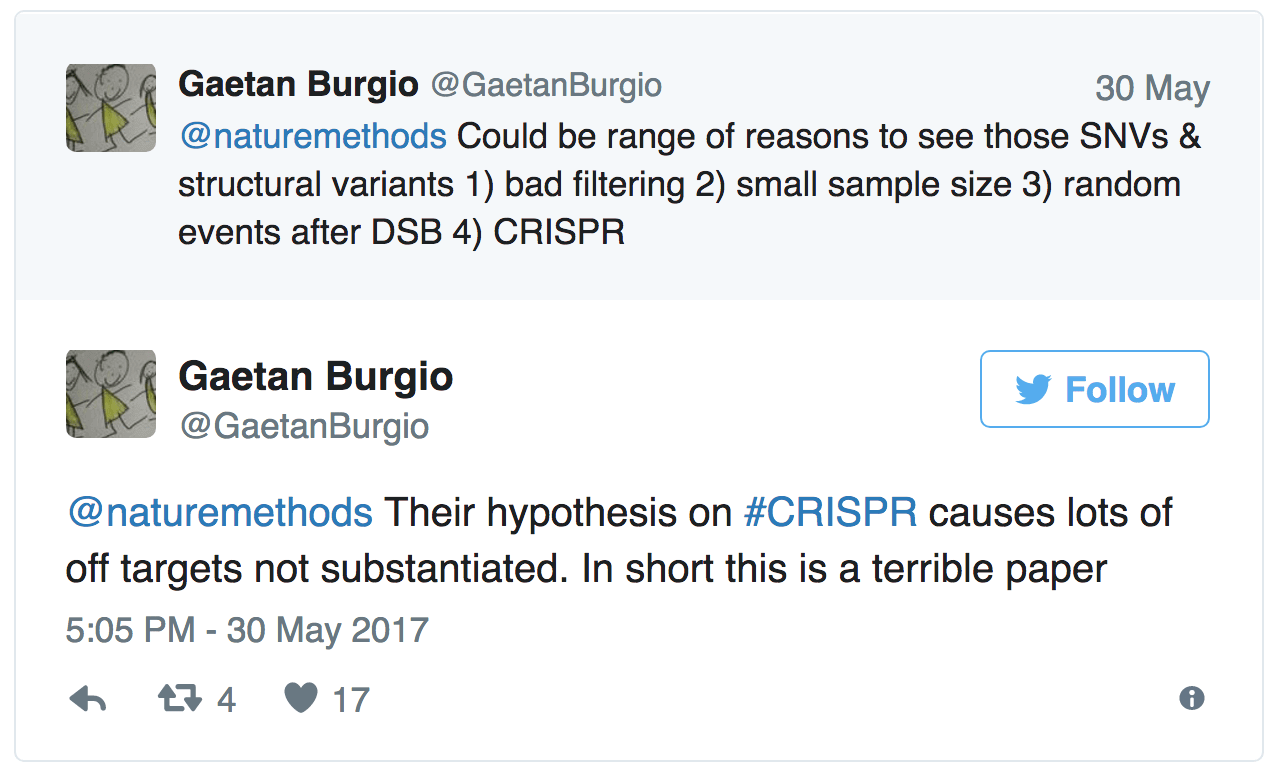 Gaétan Burgio, whose laboratory at the Australian National University is working to understand the role that cellular context plays on CRISPR efficiency, believes the paper’s central claim that CRISPR caused such an alarming number of off-target mutations is “not substantiated.”

Burgio says there could be a range of reasons for seeing so many unexpected changes in the mice, including problems with accurately detecting DNA variation, the extremely small number of mice used, random events happening after Cas9 acted or, he concedes, problems with CRISPR itself.

Burgio has been editing the DNA of mice using CRISPR since 2014 and has never seen a comparable level of off-target mutation. He says he’s confident that additional research will refute these recent findings.

Although the news of this two-mouse experiment fired up the science-focused parts of the Twittersphere, the issue it raises is not new to the field.

Researchers have known for a few years now that off-target mutations are likely given certain CRISPR protocols. More precise variants of the Cas9 enzyme have been shown to improve targeting in human tissue the lab.

Researchers have also focused on developing methods to more efficiently locate off-target mutations in the animals they study.

As scientists continue to hone the gene-editing technique, we recognize there’s still a way to go before CRISPR will be ready for safe and effective gene therapy in humans.

A version of this article was originally published at The Conversation as “CRISPR controversy raises questions about gene-editing technique” and has been republished here with permission from the original publisher.

Ian Haydon is a doctoral student in biochemistry at the University of Washington. Follow him on Twitter @ichaydon