When two people with a rare form of deafness mate, the genetic combination can yield an unusual syndrome in which the child has fragile bones, deafness, blindness and albinism. The recently-discovered syndrome is known as COMMAD, for coloboma (ocular holes), osteopetrosis (note the suffix – dense bones), microphtalmia (small eyes), macrocephaly (large head), albinism, and deafness.

This new discovery was made by Aman George and colleagues at the Ophthalmic Genetics and Visual Function Branch of the National Eye Institute. They demonstrated that with a combinatorial effect of certain genotypes from both parents, this exceedingly rare set of occurrences in the child is one possible outcome. Of course, as with any mating event, there are many possible outcomes.

The disorder is an example of a rare disease passed on by parents who do not exhibit the condition. It occurs through genetic combination and mathematical permutation (as autosomal recessive inheritance). Two children were identified with the COMMAD syndrome, and each has two different recessive mutations of the gene that codes for microphthalmia-associated transcription factor (MITF). The research report was published in the American Journal of Human Genetics. 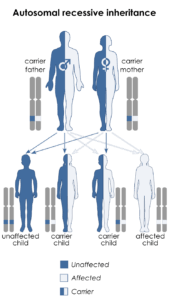 What had been previously known about MITF was limited, but that mice with two recessive mutations in the MITF gene had impairments in their osteoclasts (bone degradation cells), mast cells (a type of immune cell), retinal pigment, and melanocytes (pigment-producing cells of the skin). Beyond the mice research, human cases were unknown prior to this work and these two cases. In vitro cell experiments (within flasks) using zebrafish embryos showed that the abnormal MITF protein could not enter cell nuclei or bind DNA, and it impaired melanocyte migration, differentiation, and survivability – which is a strong supportive causal factor for the albinism seen in the two human cases. Similarly, the eye abnormalities also could occur because of the MITF mutations on the retinal pigment epithelium, causing ophthalmic disorder. This is due in large part because of the powerful role the retinal pigment epithelium (RPE) plays in eye health and maintenance.

The retinal pigment epithelium is a single layer of cells overlying the retina, just underneath the photoreceptive layer of cells. The RPE expresses certain proteins that regulate the transport of nutrients (to) and waste (away from) the retina. It also helps to continuously renew ocular precision by ingesting and degrading the worn out terminal ends of the photoreceptor outer pieces, keeping vision sharp. It also acts as a physical barrier to the retina against high-energy light as well as oxygen reactive species created from photodegradation of molecules. MITF mutations leading to RPE abnormalities can significantly compromise these structures required for proper function and homeostasis within the eye.

Related article:  Unraveling the paradox: Why GMO drugs and GMO foods are treated differently by critics 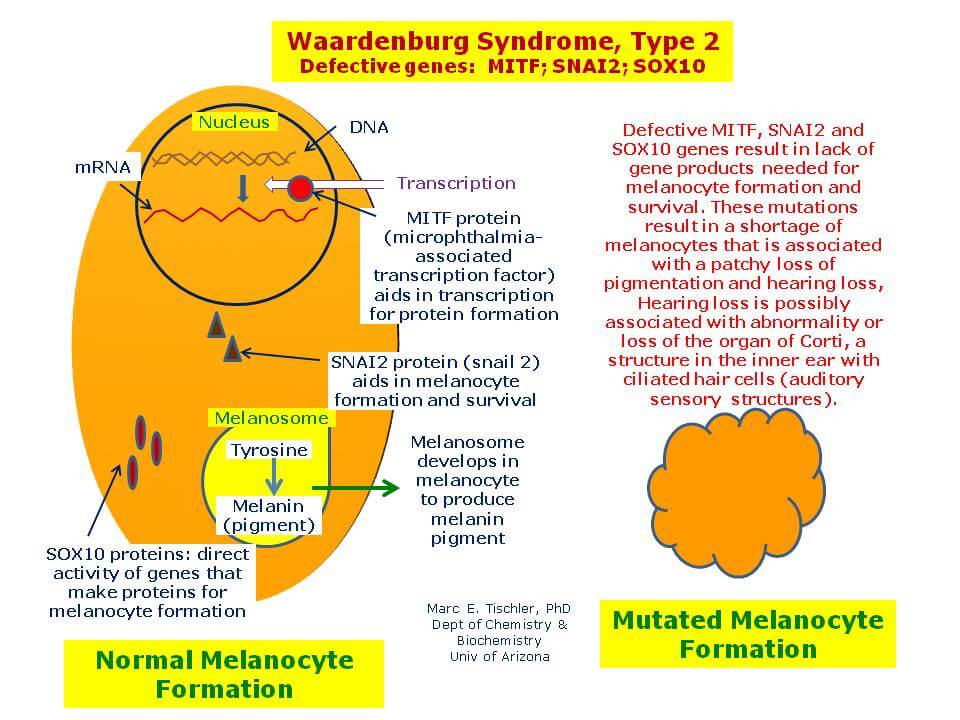 In order to mitigate future occurrences of this particular spectrum of rare diseases, the researchers advise genetic testing in particular cases with couples where Waardenburg syndrome type 2A (WS2A) or Tietz syndrome may be present (and/or if both parents have partial albinism and hearing loss, which could be an indicator), as well as genetic counseling about the risks to offspring if it is indeed a potential factor. Waardenburg syndrome type 2 is usually inherited in an autosomal dominant manner. This means that having a mutation in only one copy of the responsible gene in each cell is enough to cause features of the condition.

When a person with a mutation that causes an autosomal dominant condition has children, each child has a 50% (1 in 2) chance to inherit that mutation. In other cases, the mutation occurs for the first time in a person with no family history of the condition. This is called a de novo mutation. What’s interesting about COMMAD is that it is a disease associated with one gene, and it has a different “mode of inheritance” from both WS2A and Tietz syndrome, which are both autosomal dominant. Identifying the gene responsible for WS2 is necessary to determine the subtype that is present in a person or family.

The children in the particular cases inherited different recessive mutations from each parent, yet the parents have the same autosomal dominant condition, but didn’t know it. The parents and children in the two cases each have Waardenburg syndrome type 2A, with very white complexions, blue eyes, premature graying, and profound sensorineural hearing loss. Some of the siblings of the two cases are fair and deaf like the parents. In some instances, an affected person inherits the mutated gene from an affected parent.

People with questions about genetic risks or genetic testing for themselves or family members should speak with a genetics counselor about their options. Typical steps in the process are:

Ben Locwin is a behavioral neuroscientist and astrophysicist with a masters in business, and a researcher on the genetics of human disease. Follow him on Twitter @BenLocwin.