Over the last 12,000 years or so, human civilization has noticeably reshaped the Earth’s surface. But changes on our own planet will likely pale in comparison when humans settle on other celestial bodies. While many of the changes on Earth over the centuries have been related to food production, by way of agriculture, changes on other worlds will result, not only from the need for on-site production of food, but also for all other consumables, including air.

As vital as synthetic biology will be to the early piloted missions to Mars and voyages of exploration, it will become indispensable to establish a long-term human presence off-Earth, namely colonization. That’s because we’ve evolved over billions of years to thrive specifically in the environments provides by our home planet.

Our physiology is well-suited to Earth’s gravity and its oxygen-rich atmosphere. We also depend on Earth’s global magnetic field to shield us from intense space radiation in the form of charged particles. In comparison, Mars has only patches of localized magnetism, thought to be remnants of a global magnetic field in the distant past. Currently, the Red Planet has no global magnetic field that could trap particle radiation from interplanetary space. Also, the Martian atmosphere is so thin that any shielding against space radiation of any kind is minor compared with the protection that Earth’s atmosphere affords. At the Martian surface, atmospheric pressure never gets above 7 millibars. That’s like Earth at an altitude of about 27,000 m (89,000 ft), which is almost the edge of space. And while the moon’s proximity to Earth could make it a better location than Mars for the first off-world colony, the lunar radiation environment is similar to that of Mars. That’s because the moon has practically no atmosphere at all, plus it too lacks a global magnetic field. On the moon, or on Mars, early colonists must live underground.

Living off the land: Creating Earth-like environments away from Earth

Living anywhere in our Solar System beyond Earth will require the same level of protection that an astronaut needs while walking in space. A human-friendly environment must be provided to sustain life, and for long-term human presence that environment must be sustainable. In contrast to short flights into low-Earth orbit, or brief visits to the Moon, space colonists will not be able to rely on deliveries of air, water, and food from Earth; instead they will have to live off the land. They’ll have to create Earth-like environments with consumables derived from local materials and recycled the way that air, water, and things that we eat are replenished on our home world.

The lack of technology for such sustainable life support systems is a major factor underlying criticism of human space exploration. And it’s not the only factor. There’s also the high cost of human space flight and the substantial risk to human life. Weighed against the staggering advances in computers, robots, and nanotechnology, the argument for sending astronauts to explore space instead of robot probes seems weak, except when one more issue is added to the equation: extinction insurance against planet-wide disasters caused either by nature, or by our own negligence. 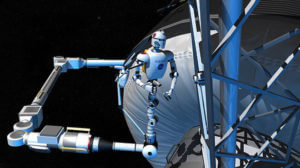 Louis Friedman, a space policy expert and astronautical engineer, embraces both the pro-human and pro-robot perspective in his book. He does this by arguing that off-world colonization will be needed, and therefore accomplished soon, to assure long-term survival of humanity, with Mars as the chosen location for our second home. But when it comes to exploration deeper into space, Friedman believes we’ll opt to leave that task to our robot emissaries. The reason, which he outlined in an interview with this writer for Discover Magazine, is that technology — including biotechnology that will enable uploading of the visual, audio, and other sensory experiences of our robot explorers to the human brain — will make virtual travel to distant locations better than the real thing, so why put the fragile human body at so much risk?

How much risk is acceptable may be a matter of opinion, but in addition to making a virtual space exploration experience, biotechnology also could reduce the risk to humans who do choose to travel through space physically. In a paper published in the Journal of the Royal Society, University of California, Berkeley aerospace engineer and synthetic biology researcher Amor Menezes suggested six key challenges to establishing a human space presence that could be addressed with synthetic biology.

Synthetic biology and the challenges of space colonization

The first challenge, Menezes and his colleagues explain, is resource utilization. Unlike the Pilgrims on the shores of America, early colonists on the Moon or Mars will not be able to get their dinner by going fishing, but they could make the lunar or Martian dirt into soil for growing plants. The Moon has water in the form of ice that they could melt and both water and the lunar rocks contain oxygen that can be drawn out through electrochemical reactions. Rather than discard the carbon dioxide that humans exhale as is done on spacecraft, colonists could use the waste gas as a carbon source for making food. We already have organisms that do this. They include plants and photosynthetic bacteria, but genetic engineering has been making the carbon fixation process to create food more efficient, and future modification could be tailored to make optimize photosynthesis for the dirt and environments of the Moon and Mars. In addition to food production, organisms can also be engineered to convert Martian and lunar materials into fuel that could be used for rockets, and finally the organisms could be used to process waste.

In addition to using locally derived resources, space colonists will need to engage in massive manufacturing. Menezes believes that organisms could be engineered to produce biocement, biopolymers, adhesives, and other building materials. By recycling air and water. processing solid wastes, and producing food, genetically modified organisms could also play a central role in life support systems, which the paper lists as the third challenge for a long-term human space presence.

As for the fourth challenge, the researchers discuss space medicine and human health applications. Examples of how genetic engineering can help in this area include onsite synthesis of drugs, a capability that will be vital to colonizations, since  drugs are vulnerable to radiation, making the prospect of transporting medicines from Earth unattractive. At the same time, modified organisms might also be developed to create radiation-resistant clothing and other bioshielding material.

Space cybernetics is the fifth challenge. For reasons similar to the drug manufacture issue, space colonists will be better off making their own electronics rather than depending on electronics shipped from Earth, and biosynthetic approaches could be the right tactic.

The final challenge, one that Menezes and the team admits is the most difficult, is called terraforming. Whether on the Moon, Mars, or even an asteroid, living inside a pressurized module won’t be satisfying for more than a short bout. For long-term residence, humans will need environments that look and feel natural, with plenty of trees, parkland, and rivers and streams in order to thrive.

The process of converting an entire planet like Mars or Venus into a world with a breathable atmosphere and a comfortable temperature is called terraforming. Scientists think that it could be technically possible, but terraforming an entire Mars-like world would probably take centuries and possibly even millennia. For this reason, space colonization proponents are also considering a less ambitious goal known as paraterraforming, basically terraforming but on a limited area of another world. On the Moon, for instance, a large crater, such as the 21 kilometer wide Shackelton crater on the Moon’s south pole, could be sealed with a dome and the inner environment could be terraformed in just a few years. On Mars, caves could be sealed and terraformed, while a small asteroid could be hollowed out, terraformed on the inside and even spun to create Earth-equivalent gravity. In all of these cases, engineered organisms would be key to the paraformation process. As on Earth, success would be more likely for those willing to start small, and the creation of an Earth-like environment on a small scale would demonstrate that, in the future, it might also be achieved on a planetary scale.

If a long-term human presence on other worlds is the goal, then genetically altered organisms are the key. If this is the case, and if we do decide that extinction insurance makes sense, it would mean that human survival itself depends on the continued development of biotechnology.