David Warmflash | December 20, 2017
This article or excerpt is included in the GLP’s daily curated selection of ideologically diverse news, opinion and analysis of biotechnology innovation.

There is a mini Solar System in our midst with really good prospects for harboring life. Last month, NASA announced the discovery of four small planets orbiting TRAPPIST-1—a red dwarf star 39 light-years away that already had been known to have three planets in the Earth-Venus size range. Seven Earth-sized planets around a star is an unprecedented find; despite the discovery and confirmation of more than 3,000 extrasolar planets over the past three decades, most such worlds are gas giants, like our own Jupiter and Saturn.

Astronomers have confirmed the presence of only a few dozen worlds as small as the rocky worlds of our inner Solar System and orbiting within the “Goldilocks zone” of their stars –not to close in, not too far out, allowing for liquid water at a planetary surface. For the Sun, that zone is thought to run from the orbit of Venus to the orbit of Mars –or somewhat further, according to new research. Astrobiologists think that surface water makes the presence of life –at least life that we could detect across space– much more likely on any given world. Initially three of the seven planets of TRAPPIST-1 –planets e, f, and g– were said to be in its Goldilocks zone.

Just days after the NASA announcement, however, came another study that added planet h, the outermost world of the seven. Based at the Carl Sagan Center at Cornell, the newer study expands the Goldilocks zone around any star by 30-60 percent, so it has implications far beyond TRAPPIST-1.

Being a much smaller, dimmer, cooler star compared with the Sun, TRAPPIST-1 makes for a system in which things are scaled down. The Goldilocks zone is located very close to the star, closer than Mercury orbits the Sun. This means that all seven planets orbit the star very quickly. Whereas Mercury takes 88 Earth days to orbit the Sun, even the furthest out TRAPPIST-1 world, planet h, orbits in just under 19 days. Of course, days are different there. The planets, especially the inner ones, are probably locked by gravity into a situation where a day and year are the same thing. The same side of the planet faces the star, the way that our Moon keeps face toward Earth all the time. 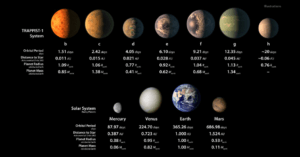 This situation would not necessarily be a problem for life forms, and the scaled down size of the system offers a certain advantage in that the planets are very close together. Rather than being points of light as we see Venus and Mars, somebody on a TRAPPIST-1 planet would see a neighboring world as a circles, gibbous, or crescent, as we see the Moon. The distance between neighboring planets is just a few times the distance between Earth and the Moon. Needless to say, a civilization with our level of technology in such a scaled down system would have a much easier time sending astronauts than we’re having sending astronauts to Mars or Venus.

The sheer number of Earth-sized planets around TRAPPIST-1 is a good thing for the prospects of life throughout the Cosmos. It makes the multiple origins of life of life from non-living chemistry more likely if more worlds are available to serve locations for such an origin, but the TRAPPIST-1 find adds to another dimension of the equation. The close distance between the planets means that if life exists on one world, it will probably exist on all of them. This, in turn, improves the prospects of life surviving planet-wide disasters, like Earth’s Permian-Triassic extinction, which wiped out more than 90 percent of life 250 million years ago.

Caveats on the Goldilocks zone

Although the capability for liquid water is the main factor for habitability, the Goldilocks zone applies to habitability primarily in terms of what could be detected across space. As we move further out from a star, it is possible to have life deep down, for instance in an ocean that exists beneath thick layers of ice, due to heating on the inside of a world. Jupiter’s moon Europa and Saturn’s moon Enceladus are in this category. They are top targets for future space probes looking for extraterrestrial life, even though their surfaces are too cold for liquid water. Life forms in an ocean deep under the surface of an icy moon of another star system would not be detectable remotely by any technology we know, so we define such frigid regions of a star system as being outside the Goldilocks zone.

On the other hand, life on the surface and in the atmosphere of a world produces chemical signatures that will be detectable with instruments that are on the verge of launching into space. Related to this, the new study from Cornell has demonstrated planets in the size range of Earth can warm up through greenhouse heating from hydrogen gas released through volcanic activity. This means extra-strong greenhouse heating and it’s possible if a planet is extremely volcanically active, much more so than Earth ever was. The scaled-up greenhouse effect would make liquid water possible at the surface, where there such a volcanic world orbiting the Sun at a distance intermediate between than of Mars and Jupiter, but hydrogen in a planet’s air also would make any chemical signatures of life easier to detect across space.

Earlier this month, researchers Manasvi Lingam and Abraham Loeb of Harvard University posted a new analysis on Cornell University Library’s open access system with calculations showing that it would be extremely easy for microbes to travel between worlds of the TRAPPIST-1 system. Life moving between planets is not a new idea. The concept goes back to Anaxagorus, a Greek philosopher who lived 2,500 years ago. It was revived in 1908 by Swedish chemist Svante Arrhenius, and a century later by several astrobiologists, including in a Scientific American story, by this writer together with Benjamin Weiss of MIT. 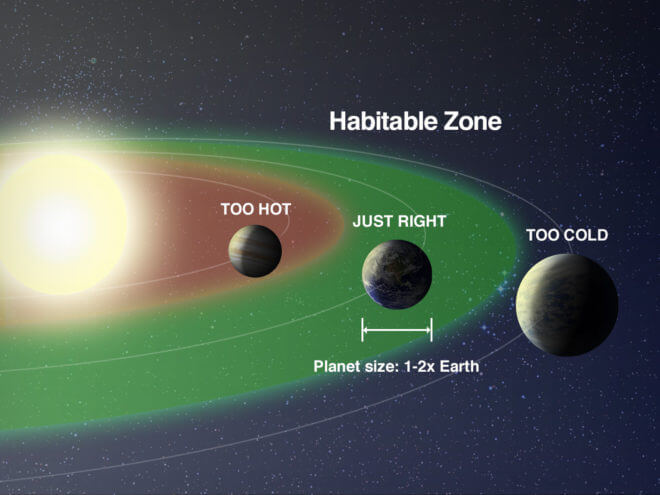 The 21st century popularization was fueled growing evidence that impacts from comets and meteoroids regularly catapult rock materials into space from the crusts of all inner Solar System planets, and evidence that tons of rocks from Mars arrive on Earth, after spending variable amounts of time in space. One such rock, a meteorite called ALH84001, way hypothesized by the late David S. McKay of NASA and colleagues to contain fossil evidence of Martian microorganisms in a 1996 paper in the journal Science.

The idea met criticism, and sometimes ridicule, leading to a dismissal of the McKay hypothesis in general media based on rationales like this one from the Daily Kos 2016:

So there the matter rests. The data do not conclusively rule out the possibility of Martian life in ALH84001, but each bit of evidence can also be equally well-explained by non-biological mechanisms. Under the scientific principle of “Ockham’s Razor”, in which no new explanatory mechanism can be invoked unless it is necessary to explain the observed evidence, there is no need to postulate the existence of Martian life to explain any of the data. So the scientific consensus is that those who claim the existence of Martian life in ALH84001 do so because they WANT it to be true, not because there is any data or evidence which makes it necessarily true.

The problem is that, in fact, there is a substantial need to postulate a biological source of one of four features that McKay and his team identified in the meteorite: crystals of magnetite. Critics have cited non-biological mechanisms to explain all of the features, including the crystals, but their assumption has always been that non-biological must imply simplicity compared with biological causes. McKay and colleagues, including some researchers from outside of his team, spent many a paper and conference, countering this reasoning.

To sum up the case for life, the magnetite crystals have five of six features in common with magnetite crystals that are made on Earth by magnetotactic bacteria. These microorganisms use the crystals to sense Earth’s magnetic field in order to navigate, so there’s an evolutionary reason why biology should also produce such a mineral Mars. On the other hand, the non-biological mechanisms proposed to have created the crystals on Mars require very specific pressure and temperature conditions in a certain geophysical context that has never been observed on Earth, nor on Mars, nor anywhere in nature, and they’re fairy difficult to produce in the lab.

Does this make Martian life the more complex explanation? Before deciding, consider that in the early 2000s, Weiss and colleagues found evidence of an ancient magnetic field on Mars in the same meteorite containing McKay’s proposed fossils. Considering everything, it’s extremely unlikely that all five features observed in the magnetite crystals of the ALH84001 magnetite came together, unless natural selection were involved. A biological origin is a simpler explanation, and so, by Okham’s Razor, the McKay hypothesis remains strong.

Movement of life between planets

The status of ALH84001 notwithstanding, there is no uncertainty about the movement of planetary materials, especially between Mars and Earth. Study of meteorites and testing involving rapid acceleration of rocks suggest that microorganisms could survive heating and shock forces associated from catapulting, due to impact events, plus even small rocks heat only on the surface when entering Earth’s atmosphere, so life forms in the interior could survive the arrival process. Evidence from various experiments conducted in space since the 1960s suggest that small life forms can survive long periods in space, and The Planetary Society is preparing more experiments to test the idea further.

Whereas Anaxagoras, Arrhenius, and others called the scenario panspermia, this term means “seeds everywhere”, so it really refers to the movement of life throughout the Cosmos, meaning between star systems and even galaxies. But to be more conservative, Planetary Society researchers have been using the term transpermia to specify movement of life merely between nearby planets.

All of this is in the context of distances on the scale of our own Solar System, but with the TRAPPIST-1 system, we’re talking about transpermia through Earth-Moon-like distances, so the new calculations make good sense. It should be very easy for life forms to survive within rocks transferred between nearby planets, so easy that it’s almost a sure thing that transpermia occurs at some level. As suggested earlier, this would provide a kind of extinction insurance, and that means that TRAPPIST-1 is a really good place to focus new instruments engaged in the search for extraterrestrial life.