Ricki Lewis | January 25, 2018
This article or excerpt is included in the GLP’s daily curated selection of ideologically diverse news, opinion and analysis of biotechnology innovation.

Using stem cells enabled researchers from Duke University to improve upon similar efforts in 2015 that had started with more specialized cells called myoblasts, taken from muscle biopsies. Using true stem cells instead, fashioned from a person’s skin fibroblasts, avoids the painful biopsy and would theoretically up the output of mature muscle cells. The paper appears in the January 9 Nature Communications.

Nenad Bursac, professor of biomedical engineering at Duke and co-workers, derived the stem cells from skin cells and then coaxed (“reprogrammed”) the cells to specialize as myogenic progenitor cells by applying the transcription factor protein Pax7. The manipulation also included the gene for the jellyfish’s green fluorescent protein, which made the doctored cells distinguishable when implanted into mice.

The myogenic progenitor cells continue dividing, giving rise to mature skeletal muscle fibers consisting of aligned actin and myosin protein filaments, as they would be in a human body. Instead the engineered cells are grown on a 3-D scaffold anointed with a nutrient-rich gel. And the cells work, contracting in response to electrical and biochemical signals, again much as they would in a body. Placed in mice, the human lab-created muscle knits itself a blood supply and contracts.

The secret to success in tissue engineering is to try to mimic the functioning of the optimal cell type. “These progenitor cells resemble adult muscle stem cells called ‘satellite cells’ that can theoretically grow an entire muscle starting from a single cell,” Bursac said.

Researchers have long sought to tap into the developmental potential of satellite cells to jumpstart formation of new muscle, which makes up about 40 percent of the body. In uninjured muscle, satellite cells tuck quietly between the membranes of the muscle fibers and the outer layer, a little like a small rubber eraser might be packaged atop a bunch of pencils.

Within a day of muscle injury, satellite cells awaken and get to work doing what stem cells do: each time they divide, one daughter cell keeps dividing to give rise to mature, specialized muscle cells, while the other yields another stem cell to maintain the ability to heal. Within a few days of this awakening, new muscle tissue appears. In the body, Pax7 orchestrates the production of new muscle.

Related article:  'Testes in overdrive': Male efforts to improve attractiveness can damage ability to have children

Although the new method cranks out enough stem cells to make applications in tissue engineering feasible, the resulting muscle is not quite as strong as the researchers would like. Still, they think the new cells will provide an excellent resource to test drugs to treat a variety of muscle diseases, many of which have few therapeutic options.

“When a child’s muscles are already withering away from something like Duchenne muscular dystrophy, it would not be ethical to take muscle samples from them and do further damage. But with this technique, we can just take a small sample of non-muscle tissue, like skin or blood, revert the obtained cells to a pluripotent state, and eventually grow an endless number of functioning muscle fibers to test,” Bursac said. It might also be possible to correct the mutations that cause these diseases. 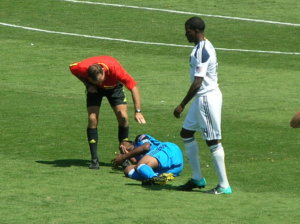 Another potential application of muscle tissue grown from stem cells is to treat injuries. From 35 to 55 percent of sports injuries damage skeletal muscle, and subsequent scar tissue buildup can painfully deform and shorten muscles. Sometimes conventional treatments take too long or just aren’t enough, including “RICE” (rest, ice, compression, and elevation), drugs (NSAIDs and steroid shots), range of motion exercises, and heat. If researchers can limit the proliferation of stem cells to replace compromised tissue but not overgrow, implants that speed healing, using a patient’s own cells, might be possible. Stay tuned!