‘Brain banks’: Why these scientists want your brain

Rae Ellen Bichell | February 1, 2018
This article or excerpt is included in the GLP’s daily curated selection of ideologically diverse news, opinion and analysis of biotechnology innovation.

In mid-October, Dr. David Bennett, a neurologist who directs the Alzheimer’s Disease Center at Rush University Medical Center in Chicago, stood in a St. Louis auditorium packed with nuns. His goal: To convince them — particularly the ones without brain disease — to donate their brains to science.

To Bennett, making such acquisitions is, in some ways, more crucial than ever. Demand for brains for scientific research is rising across the board — driven in varying degrees by increased funding for research on brain disorders, rising incidence of age-related brain disease, big technological leaps in scientific tools used to analyze the brain, and a growing sense that sometimes, studying animals just isn’t good enough to understand and fix human disease.

But more than this, scientists like Bennett are realizing that the brains they have traditionally studied (Bennett maintains 4,000 square feet of cabinets and freezers full of brain slices in Chicago), are too often riddled with the signs of end stage Alzheimer’s and other maladies that contribute to dementia. Far more rare are comparatively healthy brains that can allow scientists to more accurately identify what causes dementia — and what protects us from it.

That deficiency now has Bennett and other scientists working hard to stock their shelves with a particularly precious resource: the brains of people like Sister Carleen Reck, who heard Bennett speak and thought his request for brain donations was a good idea, so she signed an anatomical gift act.

Still mentally sharp and physically healthy at 80 years old, Reck was active in her community, running an organization helping former inmates reintegrate for 17 years. In her retirement, she visits parishioners, does bookkeeping, and is learning how to play a type of accordion called a melodeon.

Bennett’s collection is one of many so-called “brain banks” across the country that researchers rely on as sources of material for brain experiments, and one of a handful across the country that provide material for the study of age-related disease. Six other institutions recently became part of something called the NeuroBioBank, a network started in 2013 by the National Institutes of Health to make brain distribution smoother.

“If even 1 percent of Americans with and without brain disorders would donate their brains to research after death, this would revolutionize progress toward diagnosing, preventing, and curing brain disease as we know it,” wrote various NIH directors in July in a plea for brain donations — particularly healthy ones.

For example, a series of studies from the 1980s to the present have found neuron-killing tangles, which are strongly associated with Alzheimer’s disease, in the brains of people who were, cognitively and functionally speaking, fine. Some people can live into old age with the same signs of brain injury as someone with Alzheimer’s and Parkinson’s, but continue to function well anyway. “This is where novel therapeutics are going to come from,” says Bennett. 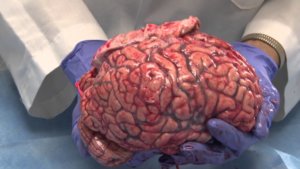 Sabina Berretta, a neuroscientist with McLean Hospital and Harvard Medical School, says non-diseased brains are also, in some ways now more than ever, helping researchers uncover how the brain works. A few years ago, Berretta and her colleagues discovered a previously undescribed structure lurking in the extracellular matrix.

“Until not very long ago, [the extracellular matrix] was thought to be this sort of goop that holds our cells together. In reality it has fascinating functions, not only during brain development but also during adulthood,” says Berretta, who is also the scientific director of the Harvard Brain Tissue Resource Center.

She and her colleagues realized that there were a lot more of the mysterious structures, now called CS-6 clusters, in non-diseased brains than there were in the brains of people who’d had schizophrenia or bipolar disorder.

“We are beginning to understand they’re actually really key structures in the way our brain changes in response to experience,” says Berretta. And, she says, her lab is far from the only one to recently make such findings.

“We are beginning to understand how little we actually know about the human brain,” says Beretta.

Still, it’s easier to recruit blood or organ donors than it is to recruit a brain donor. People without brain disease aren’t likely to find themselves in a clinic where a doctor might suggest donating a brain. And despite forming the NeuroBioBank, the NIH doesn’t want to get in the business of recruiting brain donations like the Red Cross does with blood drives.

As Michelle Freund, director of the NIH NeuroBioBank puts it, “It’s a little creepy. ‘The government wants your brain.’ So, we ourselves don’t do all that much.”

Instead, it’s up to people like Bennett and Berretta to come up with their own solutions.

Bennett has been working on this problem for a long time, giving talks to recruit donors wherever he can, from the suburbs of northern Illinois to retirement centers. He struck gold when he realized that nuns and priests appear to be particularly generous with their body parts if it serves the common good; Bennett now works with about 45 religious orders across the country. He’s also looking outside the U.S.

“I have a study in Sao Paulo, Brazil, where we recruit dead people,” says Bennett. “Brazil has a law that if you don’t have a cause of death on your death certificate, you must have an autopsy, so they set up autopsy centers across the country.” He has a grant from the NIH to talk to families at autopsy centers about brain donation.

Berretta, meanwhile, is planning a social media campaign to drum up donations (“A brain donation is the gift of knowledge,” one potential appeal reads), though she has to get approval from the Institutional Review Board first, which is an often-lengthy process that’s required for all studies involving human participants. She’s also working with various associations of social workers, who are good at talking to people at difficult moments, like near-death, and may be particularly well-placed to kindly ask for brains.

Brain banks like those in New York and Baltimore have also built relationships with local medical examiners, who sometimes put them in touch with families who might be willing to donate the brain of a recently deceased relative. 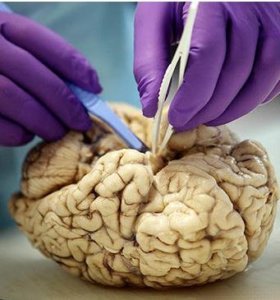 One particularly promising new brain pipeline is a one-year-old nonprofit called the Brain Donor Project, started by Tish Hevel, a communications specialist and former newsroom manager who didn’t know anything about brain donation until her dad was suffering from Lewy body dementia in 2014. After he passed away in March of the following year, the family donated his brain to the NeuroBioBank. “It was so complicated that we went back to the NIH and said, ‘You guys need some help with this,’” she says.

Since the nonprofit started last year, more than a thousand brain donors across 50 states have signed up to donate. About a third of them, Hevel estimates, might be considered healthy controls, though it’s probable that some of these will develop diseases by the time they die.

Hevel, like Bennett and Berretta, considers each donation an invaluable act of generosity to science. The brain is “the basis of the identity,” says Hevel. “When you hold something like that in your hands, you’re aware that it is something of tremendous importance and tremendous meaning.”

Within hours of when Reck dies, her skin will be pulled back to the eyebrows, her skull sawed open, spinal cord snipped, and her brain removed. While her body gets prepared for the funeral, her brain will make its way to its final resting place in Chicago. A pathologist will cut the brain in half and slice it into pancake-thin pieces before carefully studying each piece for anomalies. Then, half will go in a freezer, and the other half will take its place in a formalin-filled container, where it will stay until a researcher requests it.

Assuming the brain remains free of Alzheimer’s and other diseases of aging, Reck’s brain will be, as Bennett put it, an “extraordinarily valuable” resource precisely because it’s unremarkable.

“That brain won’t do me any good after I’m dead,” Reck said when asked why she decided to become a donor. “I might as well.”

Rae Ellen Bichell is a freelance science journalist based in Colorado. She previously covered biomedical research and general science for National Public Radio. You can find her on Twitter @raelnb.

This article was originally published on Undark as Wanted: Your Healthy Brain and has been republished here with permission.