Viewpoint: We aren’t even close to being able to engineer superhumans

This article or excerpt is included in the GLP’s daily curated selection of ideologically diverse news, opinion and analysis of biotechnology innovation.
First, let me tell you how smart I am. So smart. My fifth-grade teacher said I was gifted in mathematics and, looking back, I have to admit that she was right. I’ve properly grasped the character of metaphysics as trope nominalism, and I can tell you that time exists, but that it can’t be integrated into a fundamental equation. I’m also street-smart. Most of the things that other people say are only partially true. And I can tell.

A paper published in Nature Genetics in 2017 reported that, after analysing tens of thousands of genomes, scientists had tied 52 genes to human intelligence, though no single variant contributed more than a tiny fraction of a single percentage point to intelligence. As the senior author of the study Danielle Posthuma, a statistical geneticist at the Vrije Universiteit (VU) Amsterdam and VU University Medical Center Amsterdam, told The New York Times, ‘there’s a long way to go’ before scientists can actually predict intelligence using genetics. Even so, it is easy to imagine social impacts that are unsettling: students stapling their genome sequencing results to their college applications; potential employers mining genetic data for candidates; in-vitro fertilisation clinics promising IQ boosts using powerful new tools such as the genome-editing system CRISPR-Cas9.

Some people are already signing on for this new world. Philosophers such as John Harris of the University of Manchester and Julian Savulescu of the University of Oxford have argued that we will have a duty to manipulate the genetic code of our future children, a concept Savulescu termed ‘procreative beneficence’. The field has extended the term ‘parental neglect’ to ‘genetic neglect’, suggesting that if we don’t use genetic engineering or cognitive enhancement to improve our children when we can, it’s a form of abuse. Others, like David Correia, who teaches American Studies at the University of New Mexico, envisions dystopian outcomes, where the wealthy use genetic engineering to translate power from the social sphere into the enduring code of the genome itself.

Such concerns are longstanding; the public has been on guard about altering the genetics of intelligence at least since scientists invented recombinant DNA. As long ago as the 1970s, David Baltimore, who won a Nobel Prize, questioned whether his pioneering work might show that ‘the differences between people are genetic differences, not environmental differences’.

I say, dream on. As it turns out, genes contribute to intelligence, but only broadly, and with subtle effect. Genes interact in complex relationships to create neural systems that might be impossible to reverse-engineer. In fact, computational scientists who want to understand how genes interact to create optimal networks have come up against the kind of hard limits suggested by the so-called travelling salesperson problem. In the words of the theoretical biologist Stuart Kauffman in The Origins of Order (1993): ‘The task is to begin at one of N cities, travel in turn to each city, and return to the initial city by the shortest total route. This problem, so remarkably simple to state, is extremely difficult.’ Evolution locks in, early on, some models of what works, and hammers out refining solutions over millennia, but the best computer junkies can do to draw up an optimal biological network, given some input, is to use heuristics, which are shorthand solutions. The complexity rises to a new level, especially since proteins and cells interact at higher dimensions. Importantly, genetics research is not about to diagnose, treat or eradicate mental disorders, or be used to explain the complex interactions that give rise to intelligence. We won’t engineer superhumans any time soon.

In fact, all of this complexity can work against the ability of a species to evolve. In The Origins of Order, Kauffman introduced the concept of ‘complexity catastrophe’, a situation in complex organisms where evolution has already been optimised, with genes interlinked in so many ways that the role of natural selection becomes diminished in stepping up fitness for a given individual. In short, a species has tinkered its way to a shape that it cannot easily evolve, or improve upon. 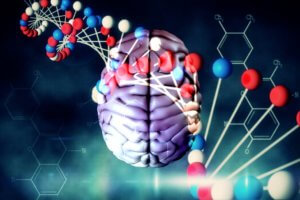 If complexity is a trap, so too is the idea that some genes are elite. In the 1960s, Richard Lewontin and John Hubby made use of a new technology called gel electrophoresis to separate unique variants of proteins. They showed that different versions of gene products, or alleles, were distributed with much higher variation than anyone had expected. In 1966, Lewontin and Hubby came up with a principle called ‘balancing selection’ to explain that suboptimal varieties of genes can remain in a population since they contribute to diversity. The human genome works in parallel. We have at least two copies of any gene on all autosomal chromosomes, and having varying copies of a gene can help, especially in immune-system diversity, or any cellular function in which evolution wants to try out some riskier thing while also maintaining a version of a gene that is tried-and-true. Other times, genetic variants that might introduce some risk or novelty can piggyback or hitchhike along with a beneficial genetic variant. If there is an implication for human intelligence, it is that genes have a parasitic quality of scheming off one another; none is superior so much as its utility is developed by exploiting its fellow genes.

Importantly, we have known for a long time that 30,000 genes cannot determine the organisation of the brain’s 100 trillion synaptic connections, pointing to the irrefutable reality that intelligence is, to an extent, forged through adversity and the stress of developing a brain. We know that evolution bargains in trade-offs of risk for advantage, which is why, I believe, we will always carry genetic variations that risk autism, obsessive-compulsive disorder, depression and schizophrenia; and it is why I believe that the neoliberal view that science will eventually solve most mental-health problems is almost certainly incorrect. In evolution, there are no superior genes, only those that bargain some risk, and a few that are optimal for particular environments and tasks.

I wish I could believe that writing is in my genes, but the novel is only hundreds of years old, not long enough for evolution to be selecting novelists, per se. The truth is that writing takes hard work, and writers can exhibit psychological traits that are otherwise a disadvantage – such as neuroticism, or relentless self-examination. We all understand and share these traits to an extent. Evolution has taught us the brutal fact that nature is most competitive when the comparative fitness between competitors is the slimmest. In light of that, the wealth inequality that has emerged in recent decades is not a validation of yawning biological gaps – it is driven by our need to justify an illusion of superiority and control.

Trust me. I should know.

Jim Kozubek is a science writer and computational biologist based in Cambridge, Massachusetts. His writing has appeared in The Atlantic, Time and Scientific American, among others. His latest book is Modern Prometheus: Editing the Human Genome with Crispr-Cas9 (2016).

This article was originally published at Aeon as Even if genes affect intelligence, we can’t engineer cleverness and has been republished here with permission.