This article or excerpt is included in the GLP’s daily curated selection of ideologically diverse news, opinion and analysis of biotechnology innovation.
The year is 2025. The US has gone to war. Young Americans are being conscripted in droves, and those with a particular gene variant are being assigned to groups of elite fighters. The gene variant in question is linked to aggressive, warrior-like behavior. Individuals who have inherited this gene variant will make better, more “effective” soldiers, or so the thinking goes. Some military strategists have suggested that those with the gene should be raised from birth in special military training camps to make the most of their abilities.

Though the above sounds like the plotline of an apocalyptic Hollywood film, it could enter the realm of possibility if research into the so-called warrior gene yields results that military minds would love to see. Early results, however, have not been encouraging.

MAOA, the gene that has become known as the ‘warrior gene’, provides instructions for the production of an enzyme called monoamine oxidase A. It is responsible for breaking down monoamine neurotransmitters such as serotonin, dopamine, epinephrine and norepinephrine. These neurotransmitters play an important role in the regulation of mood and emotions, sympathetic nervous system function, immune response and so on.

Located on the X chromosome in humans, MAOA has several variants, with the most common (aka the wild type) being MAOA-4R. While the 4R variant is associated with normal monoamine oxidase A production and function, others like the 2R and 3R variants are associated with MAO-A enzyme deficiency. This deficiency is thought to be the underlying factor in those who exhibit increased aggression and violence, and lack of impulse control.

Research aimed at replicating Caspi’s findings has produced mixed results. And the endeavor has been so unproductive in China that government-backed MAOA research there has been halted. That hasn’t completely stopped the stories and wild imaginings about the warrior gene, though.

Around 2004, the term ‘warrior gene’ first showed up in the media, leading to a lot of assumptions and misunderstandings about the MAOA gene. Many assumed that the preliminary research meant that the less common MAOA gene variants led to violent behavior and criminality in a direct and simplistic cause-and-effect manner.

Dolores Garcia-Arocena PhD, writing for The Jackson Laboratory’s blog in 2015, called the variants part of a group of “violent genes” and said they “often result in aggressive behaviors.” Though later in the blog post Garcia-Arocena explained some of the complexities related to having the MAOA gene mutations, the initial language used is well in line with much of the sensationalist sort that is common in reports about the gene to date.

The way the MAOA story has been framed is indicative of a tendency towards a kind of biological determinism that has led to profound legal consequences already — before anything conclusive is known about the MAOA gene and its link to violence and criminality.

In 2009 in Italy, Stefania Albertani pled guilty to killing her sister, burning the corpse, and then attempting to kill her parents. Genetic tests showed that Albertani has low MAOA gene activity, and this, along with neuroimaging information, was enough to have her prison sentence reduced from life to just 20 years. It was concluded that she was not in full possession of her faculties at the time of the murder. Her genes made her predisposed to commit violent crime, according to her defense team and the scientists involved in the case.

On the opposite end of the spectrum, some who commit lesser offenses could conceivably receive harsher sentences because of their genes, in an effort to guard against more extreme recidivism.

It’s also possible to envision a scenario where individuals are genetically labelled and ostracized or even exploited starting from birth. As Stephen Chen wrote for the South China Morning Post, identifying the warrior gene variants could not only help reduce the risk of violence through preventive measures, “but also be a way of boosting aggression and building a better soldier.” 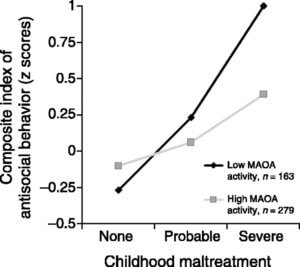 These concerns need to be considered in light of the prevalence of one of the main MAOA warrior gene variants — the 3R variant. It is found in approximately 56 percent of Maori males, 58 percent of African American males, 34 percent of European males, 61 percent of Taiwanese males and 56 percent of Chinese males. The reason these numbers are given for men but not women is because the majority of research has been done on men. Since women have two X chromosomes, they have less chance of inheriting an active version of an MAOA mutation.

With these kinds of numbers, and considering the relatively high rate of childhood maltreatment, one might expect a higher rate of violence and criminality. In reality, this is not the case. Most individuals with the 3R mutation are law-abiding citizens.

MAOA researchers in China concluded that the genes were found to play “an almost negligible role in aggressive behaviour compared to environmental factors such as poor social support, physical abuse and instability at home,” according to Chen.

And though genes do indeed influence behavior and differences in behavior between individuals, we are nowhere close to understanding exactly how they do so and under what conditions. The general consensus by scientists is that the behaviors we enact arise from incredibly complex interactions between our genes and our environments. Until the relationship between the MAOA gene and the environment is teased apart and more fully understood, we have to be exceedingly careful with how MAOA research is applied to everyday life.