This article or excerpt is included in the GLP’s daily curated selection of ideologically diverse news, opinion and analysis of biotechnology innovation.
In a Nebraska field, thousands of acres of winter wheat stretch to the horizon. In California, workers pick strawberries in a field that has grown no other crop for the past eight years. And in Maryland, a single tomato plant grows in a single pot.

What do these have in common?

They could all fall under the phrase “monoculture.” Okay, that last one with the tomato is a bit of a stretch, but it’s an example that underscores how simplistic this discussion often plays out. Many critics of modern agriculture, including anti-GMO activists, point to monoculture as what Michael Pollan calls the “great evil of modern agriculture” and a major reason for the loss of biodiversity in agriculture. They say that biotech crops encourage monocultural farming. 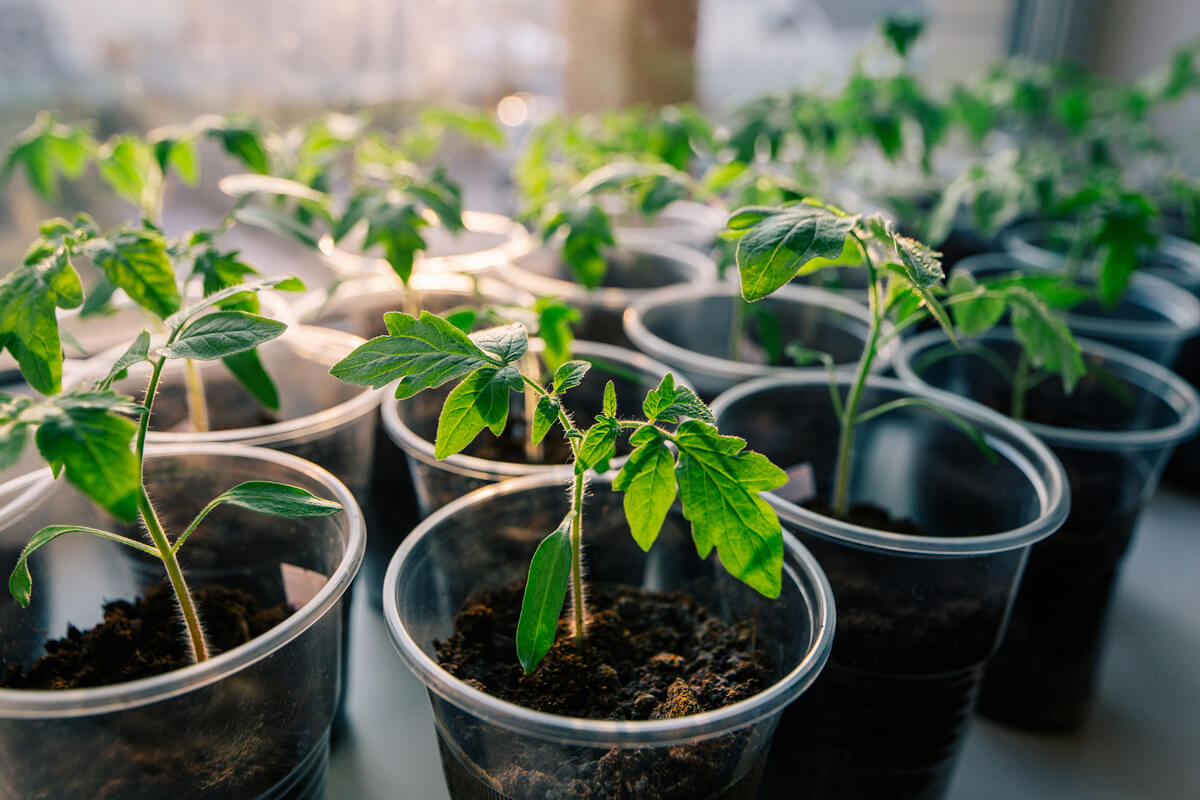 So, what is “monoculture” and is it bad or is the issue more complicated?

Andrew Kniss, a plant scientist and weed expert at the University of Wyoming, is one of many scientists who think that the word doesn’t do the practices justice. On the surface, all monoculture means is that a farmer is growing just one crop in an area. By that definition, all crops are grown in monocultures except for those grown in the tiniest of farms or home gardens.

So, how big an area defines what is “monoculture”? And how many years must a crop be grown in a given field before it’s considered “monoculture”? Does monoculture actually reduce biodiversity?

Most critics appear to use the term to suggest that something bad happens in single crop areas: blight, 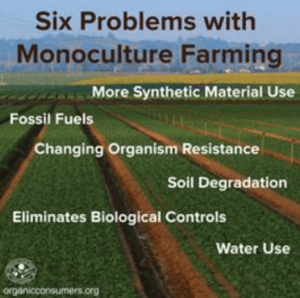 crop failure, or loss of biodiversity (in the form of native plants, pollinating insects, or microorganisms).

The Union of Concerned Scientists, under the leadership of its prior agricultural sciences director Doug Gurian-Sherman—who left UCS two years ago and now lobbies against crop biotechnology for the Center of Food Safety [read GLP profile of Gurian-Sherman here]—has argued in a post entitled “Expanding Monoculture: 8 Ways Monsanto Falls at Sustainable Agriculture”, that monoculture reduces diversity and leads to a host of other problems.

Monsanto’s emphasis on limited varieties of a few commodity crops contributes to reduced biodiversity and, as a consequence, to increased pesticide use and fertilizer pollution. Large-acreage field crops—corn, cotton, soybeans, canola, and now alfalfa—make up the bulk of Monsanto’s products, in part because of the high cost of developing engineered traits. And the approach to agriculture that this product line encourages—monoculture, the production of only one crop in a field year after year—is not a sustainable one.

The piece is short of an understanding of the basic science of farming and long on ideology, say agricultural experts.

Consider crop rotation. Most organic food supporters point to crop rotations, which are required for organic certification, as an alternative to the ‘dangers’ of monoculture. But that’s a deceptive argument. Most large farms now rotate their crops as well, so rotating in an of itself does not address the question of the impact of monoculture. And just switching between crops in alternate years doesn’t bring the kind of genetic diversity that can prevent the downsides of mechanized farming.

Monoculture, incorporating crop rotation, can also have positive impacts. Just having one crop in the field allows mechanization of agriculture. Mechanized farming allows faster, efficient planting, weeding, and harvesting, which reduces the destruction of habitats–organic and agro-ecological farming has a yield lag averaging 15-45%. Scaled up to meet the growing global demand for food, smaller scare farming would result in clear cutting of forests and dramatically reduce biodiversity,

leading to a sharp increase in greenhouse gases. Intensive farming also frees humans to discover other ways to spend our time and make a living.

Kniss also has made the point that a focus on genetic biodiversity in farming can help reduce the problems of monoculture while preserving its benefits. Examples such as the Irish Potato Famine shows what can happen when farmers depend not only on just one crop but on a crop that is genetically very, very narrow; they are vulnerable to disease. Planting genetically diverse potatoes (or any other crop) can help protect against the potentially negative impact of monoculture. And newly developed genetically modified crops, such as the Simplot Innate potato, have been specifically engineered to protect against the genetically narrowly focused potato blight. Other conventional and organically-grown potatoes are still vulnerable to the blight.

Anti-GMO activists have long claimed that genetic modifications are responsible for the extinction of species and losses of diversity that have been plaguing the planet for some 10,000 years now. They pushed through a critical set of precautionary principle-based claims critical of GMOs at the Cartagena protocol on biosafety to the convention on biological diversity.

The absence of scientific certainty due to the insufficiency of relevant information and scientific knowledge concerning the extent of the potentially unfavorable effects of a GMO on the conservation and the sustainable use of biological diversity in the importing Party, including the risks that it involves for human health, does not hinder this Party to take, as it is appropriate, a decision on the import of the GMO in question.

Mainstream scientists, who were largely excluded from the drafting of this activist-inspired notion, challenge this statement as simplistic. Peter Raven, president emeritus of the Missouri Botanical Garden and international authority on plant biology, who was involved in the formation of the Convention:

The “so-called principle of biosafety is not based on any valid scientific principles, and working it up through the Cartagena Protocol…has given license to those who for personal reasons, presumably of a political nature, wish to vent their spleen.

Scientists aren’t convinced at what they say is Shiva’s ideologically-based critique. Let’s look at the numbers. Currently, about 7,000 plants are eaten by humans. Of those, just four provide half of all food production, and 15 species of plants provide two-thirds of all food produced on earth. Meanwhile, over the past 10,000 years, the rate of species extinction has accelerated, from about one species per million every year 10,000 years ago to hundreds of species per million per year today. While the planet has about 12 million species (of which we’ve named just under 2 million), species extinction—the destruction of biodiversity—is a legitimate concern. But what’s causing it? Genetically modified crops, using transgenic techniques, did not exist 10,000 years ago. But agriculture did.

When we first started breeding plants and animals and plowing land to grow these plants and animals, only a few million humans lived on the planet. Now there are just shy of seven billion. About 11 percent of the planet is used for cultivation, a process that always has involved the destruction of native habitats, removal of unwanted plants (weeds and otherwise), and the gradual disappearance of bugs, birds, and other animals that feed on both wanted and unwanted plants. No matter what the method: plowing, tillage, burning, pesticides or genetically engineered crops; all are involved in using land in a way that does not encourage biodiversity.

What is the real impact of GMOs on diversity?

So, are GMOs responsible for increased extinctions, plowing under of rainforest land, and infestations of invasive plants and animals? In short, no. Diversity depends on two things: habitat destruction and climate change. 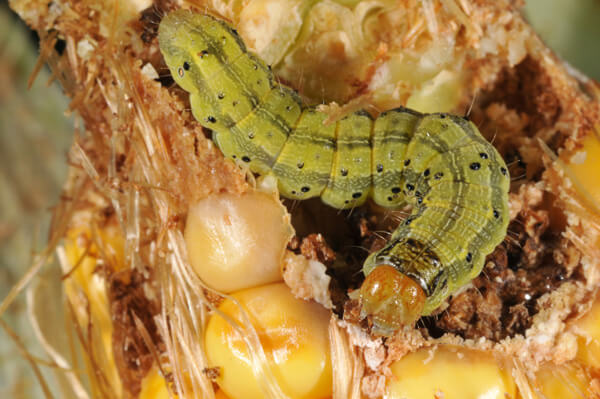 By enhancing resistance to insects, weeds, fungi, and other pests, genetically engineered food has helped improve biodiversity in agricultural areas—or at least have decreased the rate of habitat destruction—by reducing pesticide use, increasing yields, and boosting crop quality (that is, with less damage by pests).

Researchers estimate that genetic engineering, because of higher yields, has saved more than 6.4 million acres of land from cultivation for grains and oilseed, and encouraged the adoption of conservation tillage practices (plowing and arranging farm acreage to preserve water and soil).

Genetic engineering can enhance ignored and hard-to-grow crops, and improve the yields of existing ones (again, reducing the amount of land needed for farming). Newer gene-editing techniques such as Zinc Finger Nucleases and CRISPR/Cas9 can precisely edit a plant genome and control expression of desired traits, without the need for splicing a DNA sequence from another organism. These technologies can be especially valuable in improving crop yield and quality in drought-ridden areas, using less soil.

And addressing drought is becoming increasingly important. Global climate change already is affecting food output, and will only make it harder to grow enough food for an additional two billion people by 2050. Genetic engineering of drought and flood resistant crops, or developing other crops that can adapt to climate shifts, is essential.

What does climate change have to do with biodiversity? Plenty—finding new genetic traits in cultivars can produce new plants that tolerate drought. And in some areas (some studies used forests as an example), we may be able to introduce new species in areas where climate change has made conditions challenging for older species. There’s much more need for science-based solutions to today’s agricultural problems instead of finger-pointing at GMOs or mechanized agriculture.