This article or excerpt is included in the GLP’s daily curated selection of ideologically diverse news, opinion and analysis of biotechnology innovation.
In about 1980, I visited several International Maize and Wheat Improvement Center (CIMMYT) research sites in Mexico. The trip included a tortuous drive to a low-elevation research station near Poza Rica. As we rounded one bend, I vividly remember seeing an ejido farmer hoeing weeds in his half-hectare corn field. “He is always there,” I was told, day after day under the hot sun. When he progressed to one side of the field, newly emerged weeds already needed hoeing on the other.

What a tedious task I thought, as I compared that to my own corn fields in Ontario. For me, one spray application at a cost of about $20 per half-hectare, and less than 5 minutes of field work, meant near weed-free conditions for the whole growing season.

Efforts to control pests are as old as farming. With weeds at least there has always been the option of hand-pulling, hoeing, and/or small cultivators pulled by animals (more recently, tractors). Diseases and insects were worse because mechanical control was usually impossible and high pestilence meant extreme crop losses, and often starvation.

John Unsworth in History of Pesticides states, “The first recorded use of insecticides is about 4,500 years ago by Sumerians who used sulfur compounds to control insects and mites.” Over the millennia, lots of approaches have been tried.

A big change occurred in about 1940 with the discovery, manufacture and usage of two synthetic compounds – 2,4D for weed control and DDT for insects. Many other synthetic herbicides, insecticides and fungicides soon followed.

I remember the excitement in about 1962 when Professor George Jones of the Ontario Agricultural College (now part of University of Guelph) applied atrazine to a small field of corn on campus and killed almost every weed for the full season – thereby eliminated the historic need for “scuffling” (inter-row cultivation after planting) for weed control in corn.

In years since, crop agriculture everywhere in the developed world (most developing countries too) has become highly dependent on chemicals for pest control.

This did not mean a diminished effort by plant breeders to develop new pest-resistant crop varieties. But plant breeding is slow; genetic sources of pest resistance are often hard to find or unavailable; and genetic resistance usually ‘breaks down’ (pests become resistance) with time. Plant breeding is highly important to pest management but it’s insufficient by itself.

Of course, genetic resistance of pests to pesticides also develops, and herbicide usage has meant a shift in weed populations; new species tolerant to specific herbicides become more prevalent when competition from herbicide-susceptible ones disappears.

Notwithstanding the challenge of evolving pest resistance, the combination of better plant breeding techniques and new pesticides means pests are controlled far more effectively now than in times past. That’s one major reason why yields of many crops have increased dramatically in recent decades.

The advent of chemical weed control also triggered some important changes in cropping techniques. One was no-till crop planting which now represents a very common cropping practice for many crops and regions.

That event coincided with a growing public awareness of many environmental issues, and greater restrictions were soon placed on pesticide usage. Many early pesticides were banned for usage, DDT being one. Newer pesticides are safer to both human health and environment than those of earlier years.

Sustainability is a strong driver of twenty-first-century agriculture. Virtually every agricultural and food organization now lists sustainable development as a priority. Despite the common goal, sustainable agriculture has come to mean many different things. 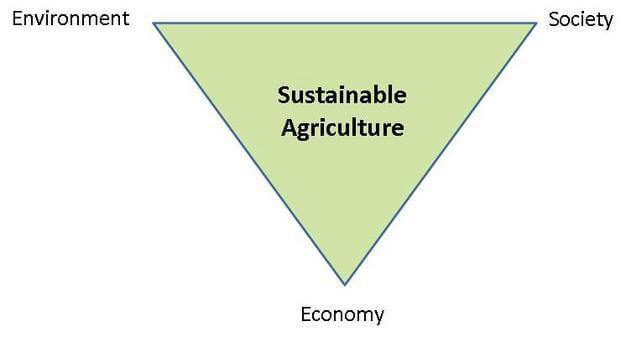 Organic agriculture which rejects the use of synthetic pesticides and some modern crop breeding technologies often defines itself as ‘sustainable’ even though the environmental benefit is mixed (see also here) and this approach generally means significantly lower productivity per hectare and higher food prices.

Genetic engineered (GE) crops, commonly called genetically modified crops or organisms, or simply GMOs, have generally meant reductions in pesticide usage and/or the use of pesticides safer to human health. Many view this as more sustainable.

Despite their differences, a common view shared by supporters of both organic agriculture and genetic engineering is that pesticide usage is inherently bad. It’s seen as a necessary evil, with a goal of sustainable agriculture being to minimize and ultimately eliminate pesticide usage.

UK environmentalist, Mark Lynas, who I admire a great deal, stated in a recent talk, “let’s get serious about getting crop protection chemicals out of farming.”  He’s not unique in equating sustainability with ‘pesticide free.’

But when you search deeper, the rationale for a goal of elimination seems vague and weak.

Yes, there are and will always be risks with pesticide usage, risks that are larger where reasonable precautions are not taken to minimize human exposure (too common, I’m told, in many developing countries). Off-target pesticide drift is also an issue. Farmers and other pesticide users too often apply pesticides prophylactically rather than in response to specific threats. Better means of predicting need are required. Finally, pesticides cost farmers money and require the use of some energy for their production and transport to users.

Risks to health and environment with pesticide usage must be balanced against the often-larger risks associated with pests and pest-induced toxins in food which pesticides help control.

Alternatives to pesticides also have notable downsides for both health and ecology. Take soil cultivation as an example. It causes the more rapid oxidation (breakdown) of soil organic matter, renders soils more vulnerable to water and wind erosion and can be devastating to soil organisms. Pests adapt to cultural controls just as with pesticide usage and plant breeding.

Everything we do in agriculture involves a balance among competing needs for food productivity, environmental integrity, and the ability of farmers to earn a living.

A reduction in pesticide usage in agriculture makes sense where effective alternative controls are available at affordable cost, and where the health and environmental risks of the alternatives are less than that of the chemicals they replace.

But reduction is not the same as elimination.

A recent Bloomberg news article about some entrepreneurs developing robotic weeders is telling: “After months of research [with robots on non-chemical weed control] they faced a disappointing truth: There was no way around herbicides….Their challenge became applying the chemicals with precision.”

The nature of pesticides will likely change. New approaches show great promise, such as ‘RNA interference’ which involves the use of compounds designed to block the action of specific genes and the enzymes they code for in specific pest organisms and/or crop plants.

But even as these are introduced, the pests will inevitably evolve to develop resistance, just as occurs with plant breeding and more traditional pesticides.

So it comes down to the subtle but important distinction between low and no pesticide usage. Reductions in pesticide usage are to be applauded where possible and net beneficial, but hopes for a total elimination of all pesticide usage in crop/food production are not realistic – at least with technologies now available or on the horizon.

This assumes of course that the goal truly is sustainable agriculture – and sustainable in the sense that agricultural technology must continually evolve and improve to address ever-changing needs and pest threats.

Of course, if the goal is pesticide elimination per se regardless of sustainability, then I suppose pesticide elimination makes sense. (Just make sure you don’t eliminate DEET-based mosquito repellents, Lysol® use in bathrooms, or common pesticides used for flea control on pets and head lice on children; insert emoji for irony here.)

It would not be possible to feed 7.6 billion people today without pesticides – let alone the 9-10 billion expected by 2050. So as well as being cautious and sparing in pesticide usage, let’s also give them some praise. Let’s thank pesticides for what they have contributed to human well-being for so many years, and will in decades to come.

And let’s stop assuming that complete pesticide elimination is a laudable and realistic goal – for it is neither.

Terry Daynard is a grain-crop farmer near Guelph, Ontario, Canada. He’s a former professor of crop science and associate dean at the University of Guelph, and former executive vice-president of the Ontario Corn Producers’ Association. Follow him on Twitter @TerryDaynard.