Selling your DNA in our ‘brave new world’

There are instances when people choose to sell their own blood. Sperm banks transact business based on a different bodily fluid. And it’s not unheard of for those desperate enough to sell an organ, such as a kidney, despite the moral implications.

So, in this realm of being paid for pieces of our own body, what about DNA? We pose this because we’re seemingly on the cusp of a brand new industry hoping to do just that.

Given continued advances with CRISPR and gene editing, as well as many genomics companies such as Ancestry.com and 23andMe gaining widespread acceptance among consumers, this latest scientific innovation is spawning companies seeking to pay individuals for their genetic material, so that they in turn can re-sell it.

The concept powering these so-called “bio-brokers” is to gather personal DNA in such quantities so that it becomes valuable enough for an individual to sell (or rent) his/her genetic data to pharmaceutical companies. Once the pharma operations acquire and catalog enough data, they can use it to aid in disease analysis and drug discovery.

On the West Coast, at least two scientific startups are developing incentives to entice consumers to swab their cheeks and turn over their DNA. The San Francisco-based Nebula Genomics, and Luna DNA located in Solana Beach, north of San Diego, are diving headfirst into this field and trying to figure out what a person’s genetic material is worth.

Nebula’s model is for interested parties to have their entire genome sequenced, and then to be paid for it. How much is it worth? That’s a fair question, but with the market in its infancy that’s still to be determined. Oh, and one other thing: the payment will be in a crypto-currency, like Bitcoin, as Nebula’s graphic sketch shows.

“Thanks to continuous technological advancement,” said Nebula’s co-founder Dennis Grishin, “we have now reached a tipping point where the genomics revolution will spread beyond academic laboratories and affect the lives of millions of people,” speaking to the San Diego Union-Tribune.

One main reason why transactions such as these are even conceivable is because the cost of sequencing the human genome has plummeted since the beginning of the century. As detailed in the accompanying chart (credit: Nebula Genomics), what used to be a stratospheric cost now sits on the opposite side of the scale. 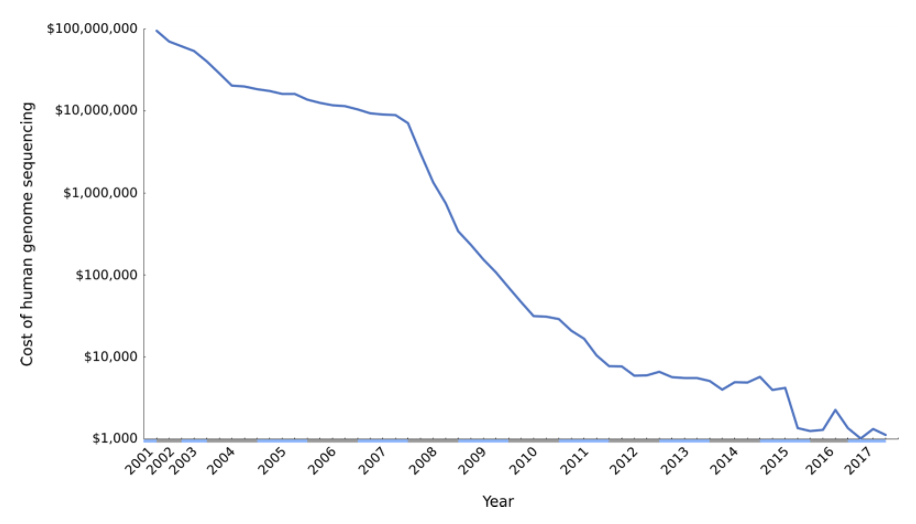 As for Luna DNA, its approach provides for individuals to share in future revenues that flow back to the firm from pharmaceutical companies, or any other scientific institution that seeks customer data.

Related article:  'No reason to panic': Experts react to study suggesting CRISPR isn't as precise as we thought

“Luna DNA is a community owned database that rewards individuals shares in the database for contributing their DNA and other medical information,” according to a statement on its website. “Shares entitle members to a share in the profits from medical research and discoveries. The proceeds flow back to the community like dividends as researchers pay to access the data for discovery.”

By comparison, companies such as Helix, 23andMe and Ancestry do not pay the consumer. The consumer pays those companies for analysis of their genetic makeup and a window into their family history and genealogy.

Meanwhile, the National Institutes of Health has launched “All of Us.” That research program aims to collect DNA from at least one million people in the United States to “serve as a national research resource to inform thousands of studies, covering a wide variety of health conditions,” with the “ultimate goal of accelerating research and improving health.”

All and all, it’s adding up to be a brave new world in the field of personal genetic data. What’s your view? Is privacy a concern, or is that an overblown issue? Please tell us. We’d like to know what you think.

Erik Lief has spent more than 25 years with major media organizations, and he produced news and sports programs for CNBC, CBS News, ESPN, and the Associated Press.

A version of this article was originally published on the American Council on Science and Health website as “Want To Sell Your DNA? 2 Firms Are Buying (Sort Of)” and has been republished here with permission.