One of the biggest challenges for any risk communications professional today is to deliver positive messages on pesticides. Like any communications process, trust is essential, but in a chemophobic world, trust in chemicals is a rare commodity. Pesticides found on the food the public consumes creates a vulnerability (fear) that cannot easily be overcome. People have to be convinced that their food is safe, any pesticide residues are of no risk and are there for a reason. In this case, we are asking a mother feeding her child to trust the chemical industry… a challenge indeed.

It wouldn’t be half as hard were it not for the opportunists seeking to take advantage of a vulnerable population worried about their health and the environment. With social media networks making it feel like cancer is found in every spoonful, frightened consumers reach for their wallets and the dream of a chemical-free world.

The narrative driven by the chemophobic activist community is that pesticides are dangerous to consumers, unnecessary and destroying the environment. They have left most of us thinking there must be some evil industry conspiracy wanting to pollute the countryside, poison children and profit from some intentional cancer plague.

Anti-GM campaigners have recently shifted their strategy to focus on how seeds are bred to resist certain pesticides. The activist attacks on glyphosate were part of an anti-GM campaign. Their logic is clear: attacking golden rice or GM brinjal was not going to increase memberships or donations, but pesticides attract public fear with minimal effort.

So for those taking up the challenge of getting the public to warm to pesticides (or pesticide-resistant seeds), allow me to catalogue what I feel are ten best practices. There have been mistakes in the past as there will likely be in future, but perhaps an open discussion is the best place to start. 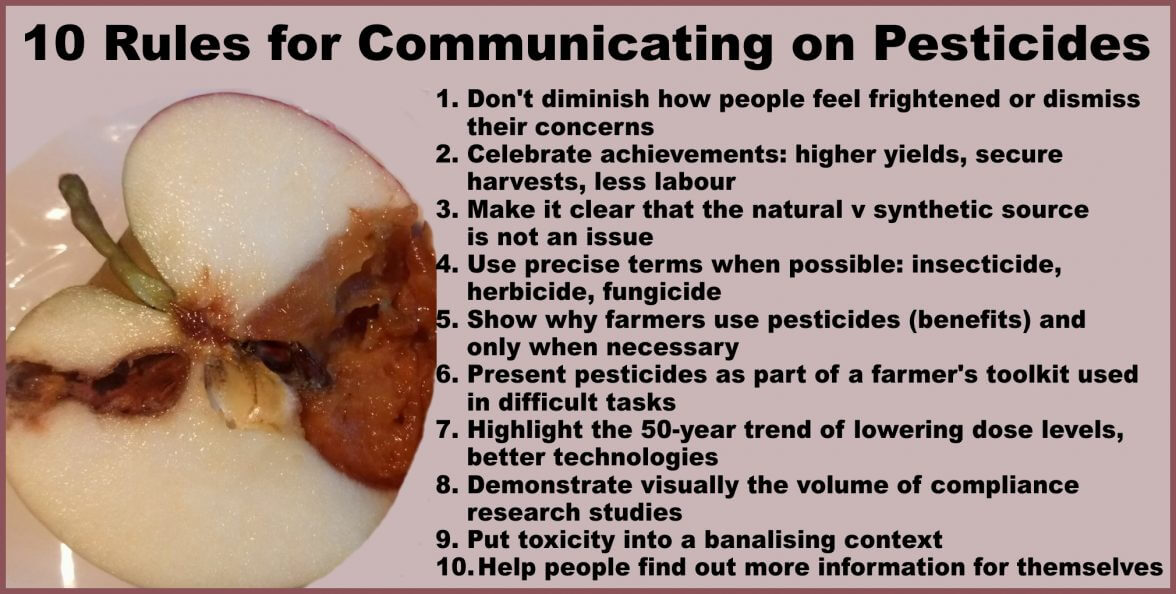 These 10 rules make communicating on pesticides seem easy. Of course anyone who has tried this challenging task will attest it is not. There are many clever and manipulative activists who are always one step ahead of you, using fear tools like children, bees and fear of cancer to undermine public trust. NGOs or social media gurus have no ethical codes of conduct restricting their behaviour (so their lies and fear-mongering can be justified in a sort of Machiavellian zealot ethics). Neither industry nor regulators can play by the same rules.

An important element of trust is the messenger. An industry spokesperson is probably the least credible voice to deliver a positive story on pesticides. Farmers and scientists need to step up and be the story-tellers. They too will suffer from the continued aggressive assault on agri-technology.

I am sure there must be ten more rules to add to this conversation and each pesticide or class of substances are different. Cultures have different perspectives (many languages consider pesticides as medicines for plants) and there are different levels of scientific literacy. One point is certain: we have a general idea today what doesn’t work when communicating on pesticides. Things can only improve… right?

David Zaruk has been an EU risk and science communications specialist since 2000, active in EU policy events from REACH and SCALE to the Pesticides Directive, from Science in Society questions to the use of the Precautionary Principle. Follow him on Twitter @zaruk

This article was originally published at European Seed as “The Risk Corner: Ten Rules for Communicating on Pesticides” and has been republished here with permission.