Delving into our complicated relationship with carbohydrates

The idea of controlling carbohydrate consumption has been bouncing around the world of diets and medicine for nearly 100 years. The concept was introduced in the 1920s as a treatment for childhood epilepsy based on the idea that such a diet mimics starvation. Proponents suggested it would dampen electrical activity in the brain.

Since then, a variety of diets have proposed carb avoidance. Among the more notable examples are the Atkins diet that began in the early 1970s and the more recent ketogenic diet popular today. That’s why low carb options are abundant in restaurants, grocery stores, hospitals and pretty much anywhere that food is sold.

The merits and drawbacks of carb cutting appear intermittently in popular culture. So it’s no surprise that the topic is in the news again, this time due to the publication of a study of more than 15,000 subjects, run by researchers at Brigham and Women’s Hospital and Harvard University in Boston, and published in the prestigious journal The Lancet. The new study revealed something that really should not be surprising, namely that a middle ground approach is healthier than either extreme, meaning consuming carbs in excess but also not consuming enough.

The study showed that reducing carbohydrate intake is not helpful — in fact it is harmful — if one replaces those lost calories with animal protein and fat. And yet, reducing carbs can be helpful if one adopts a vegan diet. That is a lot do swallow all at once — excuse the pun — but while the Harvard study is high quality it comes about 100 years into an era in which low carb diets of different forms have been studied frequently, generating a plethora of conflicting results.

The US Department of Health and Human Services (HSS) recommends a diet in which 20-35 percent of your total calories come from fat; 10-35 percent come from protein; and 45-65 percent come from carbohydrate. In other words, the recommendation is that carbohydrates account for more daily calories than either of the other two categories. There is an important caveat to this guideline.  The bulk of carbohydrates should be not be sugars (simple carbohydrates), but rather complex carbohydrates typically found in grains other foods with a lot of fiber. Unlike simple carbohydrates, which enter the bloodstream rapidly, causing a spike in in the level of insulin, complex carbohydrates are absorbed more slowly. Among the diets that have specific names, the diet that matches most closely with the standard recommendations is the Mediterranean diet. This diet has received a great deal of attention, not only in the general health and nutrition news in recent years, but also in the world of genetics. This is because, along with its ability to increase the good cholesterol in the blood (HDL) while lowering bad cholesterol (LDL) levels, the Mediterranean may help keep maintain length of telomeres, strands of DNA at the ends of chromosomes that help keep chromosomes from losing genes. 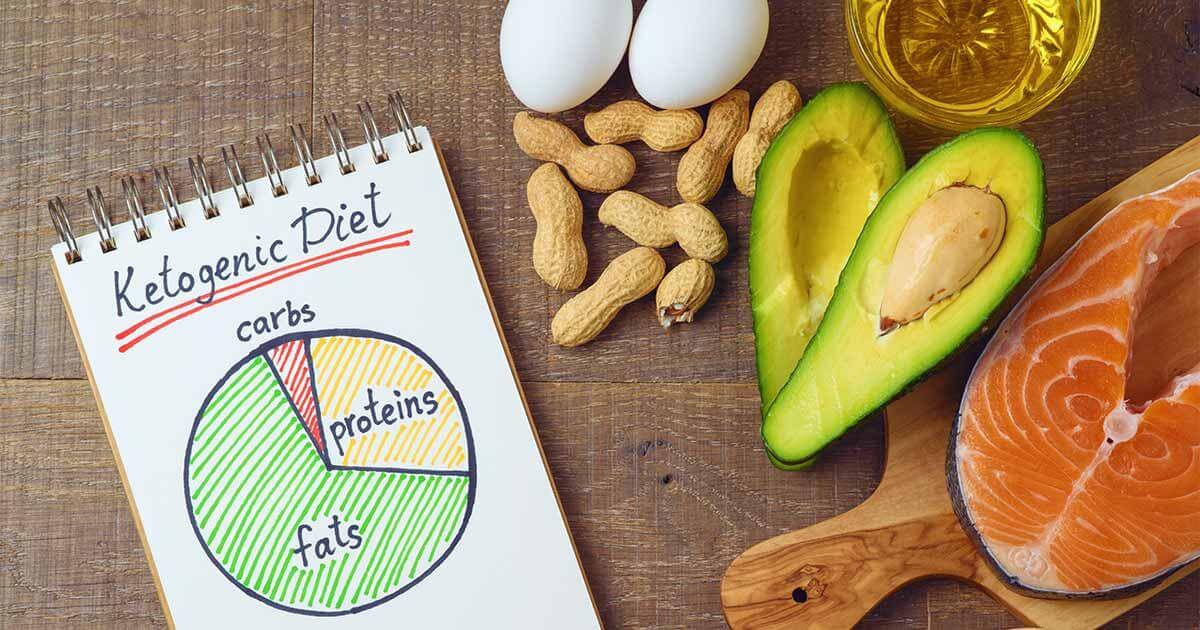 Carbohydrate avoidance can be described quantitatively in terms of how close it approaches the extreme form of a low-carbohydrate diet, namely a ketogenic diet. In its standard form, a ketogenic diet includes no more than 5 percent of calories coming from carbohydrates. The bulk of calories —  up to 75 percent — come from fat. There are variations on this diet containing up to 35 percent protein and as low as 60 percent fat, but that 60 percent is double the HSS recommended level.

The diet originally was introduced in the 1920s as a treatment for childhood epilepsy. It developed from the idea that starvation can help mitigate epilepsy. However, since starvation has multiple disadvantages, researchers in the early 20th century came up with the idea of forcing the body into ketogenic mode by depriving it of carbohydrates. This acts as as a kind of starvation simulator.

Related article:  Can cutting out carbs treat epilepsy? The ketogenic diet as a drug

Since cells of the brain and several other organs require glucose to function, depriving the body of carbohydrates depletes glycogen supplies that are locate primarily in muscles and the liver. This causes muscles and other tissues to depend on fat for energy, generating what are called ketone bodies, which the brain can use as an alternative fuel. Although this process is a simulated starvation, in many ways amounts to actual starvation. And the ketogenic diet still makes clinical research headlines from time to time in the current era. It has  proven to be somewhat effective in reducing the frequency of seizures in those with epilepsy. Since anti-seizure medications often have undesirable side effects, such dietary management of epilepsy can be an attractive option.

Another well-accepted use of low carbohydrate diets is seen in the management of diabetes. Since high glucose levels in the blood are the key feature leading to worsening health in both type I and type II diabetes, there is a well-established benefit of minimizing intake of carbohydrates, especially simple carbohydrates. However, one of the main long-term complications of type II diabetes (the more common type) is cardiovascular disease, resulting from the build up of atherosclerotic plaques in blood vessels. So high fat diets also are dangerous for diabetics. While spikes in insulin resulting from high sugar intake are considered to contribute greatly to the genesis of such plaques, dietary fat is also a problem. Consequently, diabetics are advised to avoid high fat diets, which means that ketogenic diets are not for them.

Furthermore, scientific research carried out over nearly a century has generated conflicting results regarding the type of carb cutting seen in fade diets like the 1970s Atkins diet. Although that diet is generally not considered to be ketogenic, it can be if taken to the extreme. Various research studies have revealed a range of dangerous complications that can develop from ketogenic diets, including metabolic acidosis (because ketone bodies are acidic), high uric acid levels, high cholesterol, infections, low blood sugar,  low blood sodium, pneumonia and pancreatitis. Later in life, people can lose bone minerals, leading to kidney stones and fractures. And they can develop iron-deficiency anemia, and potentially fatal heart conditions such as prolonged QT syndrome and cardiomyopathy.

It is always bad to read too deeply into one new research study, particularly when it comes to nutrition, since it’s likely that the following week a new study will come out concluding the opposite. In the case of the recent Harvard study, however, part of the outcome seems like common sense.

Researchers found a U-shaped curve characterized by the highest life expectancy corresponding to a diet ranging from 50-55 percent carbs, whereas those consuming carbs in excess of 70 percent and those consuming carbs below 30 percent of their calories have shorter life expediencies. As for idea that reducing carbohydrates to fairly low levels is safe, only if one gives up animal protein and the fat that comes with it?  That one is a little more out there. But it suggests that quite a bit more research will be needed before we have a complete answer to the question of whether low carbohydrate diets are a good option for the population as a whole rather than for people with particular conditions.