Abraham Isah | September 10, 2018
This article or excerpt is included in the GLP’s daily curated selection of ideologically diverse news, opinion and analysis of biotechnology innovation.

In July, Nigeria took a significant step down the biotech road by approving its first commercially available GMO crop, offering farmers access to two new soybean seeds, engineered to resist local pests. Farmers in that nation are hopeful the soybean approval will soon lead the way to other GMO options. The nation’s scientists are working on several other crops, including a promising cowpea variety in field trials.

But when examining Nigeria’s potential to step into an agricultural leadership role in the region, it’s important to consider what it took to get this far — as well as the forces that long opposed GMOs throughout that nation.

As in other regions where anti-GMO groups have opposed genetically engineered varieties of crops such as soybean, corn and cotton, critics tend to focus on alleged safety concerns for humans, animals and the environment.  Groups such as Health of the Mother Earth Foundation (HOMEF) argue that the risks have not been adequately identified. Despite scientific consensus that currently available food derived from GM crops poses no greater risk to human health than conventional foods, these anti-GMO critics use a variety of fear-inducing tactics to frighten regulators, farmers and consumers. For example, there have been repeated tales by many people (especially from non-scientists) that GM foods are dangerous for human consumption and have resulted in death of a number of people across countries. 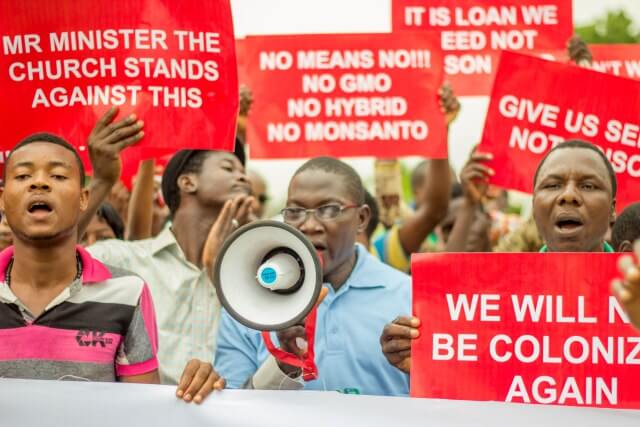 How do Anti-GMO advocacy groups work?

As in other nations where anti GMO groups have opposed the introduction of genetically engineered crops, critics operate by spreading false information about GM products and the technology. They argue that GMOs can cause cancer and other diseases. They publish false and misleading scientific data that sparks fear and concerns on the part of the general public. Among the other major anti-GM advocacy groups operating in Nigeria are: Friends of the Earth, GM Watch and Institute of Science in Society. Several of them joined together to condemn Nigeria’s decision to release the GM soybeans to farmers. They wrote:

We restate our stand that the so-called permits issued to Monsanto to introduce GMOs into Nigeria should be overturned and the Biosafety law itself should be repealed. We also call on the National Assembly to urgently investigate the process leading to the granting of the permit on Sunday, 1st May 2016 to assure Nigerians that we are not pawns and that Nigerians will not be used as guinea pigs in a commercial game to open Africa to toxic technologies.

One of the resonating questions that these advocates of traditional agriculture have continued to ask is: Are GMO creators playing God? They try to convince the public that genetic engineering is akin to tampering with nature. This is a message that often resonates with the religious members of the public .

The anti-GMO groups also argue that companies like Monsanto and Syngenta are agricultural evils. They fall back on well-publicized claims about Indian farmers being driven to suicide after the introduction of GMO cotton and Roundup herbicide. While it is true that large numbers of Indian farmers have killed themselves, the actual suicide rate is not particularly high when compared to other nations.

The suicide trend started in the 1980s — well before the 2002 introduction of GM seeds to that nation. Further, the rates of farmer suicides in India, particularly among men, have gone down since the introduction of GM cotton. Researchers point to a range of causes for that nation’s suicide trends, including a poor agriculture infrastructure, the use of non-traditional credit sources and crushing debt for farmers with little in the way of a safety net following crop failures.

Critics also refer to GMOs as “the Monsanto Poison.” Monsanto’s role in the creation of Agent Orange is another reason for the mistrust of the GMO initiative in Nigeria. Agent Orange was a defoliant formulation used by the U.S military during the Vietnam War to deprive insurgents of cover. GMO critics say Monsanto’s Agent Orange was also used in targeting food crops as part of a starvation campaign.

Are they influencing public opinion?

In Nigeria, surveys indicates that many members of the public are of the opinion that eating GM food is harmful, biotechnology is risky, and is a way of colonizing the black race. This is largely due to the negative influence of the activities of the anti-GMO advocacy groups.

In April 2018, various scientists and organizations including Biotechnology Society of Nigeria (BSN), All Farmers Association, Cornel Alliance for Science and National Biotechnology Development Agency (NABDA) gathered together in Abuja, Nigeria for a March for Science. This march was coordinated by the Open Forum of Agricultural Biotechnology, Nigeria chapter. This march hoped to help improve the mindset of people regarding GMOs. Those in support of GMO technology in Nigeria, one of whom is Nigeria’s prominent scientist, Dr. Adulrazak B. Ibrahim, emphasized the need for the application of this technology in the country.

Are they influencing politicians who are making decisions?

In its response to the growing controversy over GM food, the Nigerian Senate passed a Biosafety Bill in 2011. That bill was never signed into law. A new version of that bill is currently awaiting presidential ascent. Due to the reoccurring activities of anti-GMO advocacy groups, some politicians have been unwilling to express support for the technology. In a letter to the vice president dated May 5, 2016, a coalition of civil society groups led by Jackie Ikeotuonye and professor Chike Ogbonna, raised concerns over issuing licenses to Monsanto.

What are the chances of getting food crops approved?

In 2018, a non-governmental organization warned the Nigerian government against the proposed introduction of commercialized GM crops into the food system of the country. This summer, the deputy director of NABDA, Rose Gidado, reaffirmed the government’s plan to introduce GM cowpea in the market, but the project officer of HOMEF, Joyce Ebebeinwe, criticized this move. And while the concerns raised by anti GM groups may offer sparse scientific footing, they have succeeded in continuously slowing the progress of a more widespread GM crop adoption.

The way forward is to continuously educate members of the public with the right information. Several scientific facts exists that GM foods are safe. Such facts should be made easily accessible to the government and members of the public. Lawmakers and religious leaders should not be ignored in this fight for GMOs as they play significant role in influencing the public.  More public campaign should be organized by GM protagonists and advocates group.

Abraham Isah is a bioinformaticist and editorial assistant with Nigerian Journal of Biotechnology. He has a keen interest is genome wide association studies, computational biology and proteometabolomics. Follow Abraham on twitter @ABRAHAM2637