These days we are exposed to a great deal of negative, one-sided and inaccurate information in the media and online about a herbicide called glyphosate, often sold under the trade name Roundup.

We interact with farmers and farm organizations on a regular basis. We understand their concerns with economic sustainability and their interest in environmental stewardship. And we understand the valuable contribution that technological advances have made in improving the sustainability of agriculture. Now, agenda-driven groups seek to take one of agriculture’s most useful technologies, glyphosate, and end its use through well-orchestrated, alarmist misinformation campaigns.

But what do government surveys and regulatory decisions tell us? To understand the real story we turn to an excellent set of data that tracks trends in pesticide use, hazard and risk, over time from the Ontario Ministry of Agriculture, Food and Rural Affairs (OMAFRA) in Ontario, Canada. This data, collected using consistent methodology, enables us to learn more about how changing farming practices impact the environment and those working in agriculture.

In this article we’ll talk about the:

Use of herbicides including glyphosate In Ontario

Every five years, for the past several decades, Ontario has surveyed farmers on their use of pesticides including herbicides, insecticides and fungicides. The most recent survey dates from 2013-2014. Today, we are focusing on what this survey tells us about trends in the use of herbicides in corn and soybeans in Ontario.

Between 1983 and 2013, the total amount of herbicide used in field corn in Ontario declined by 39% (Figure 1). This reduction is primarily due to the increased use of glyphosate, which is applied at a lower rate of active ingredient (ai) per acre than the herbicides it replaced, increasing from 1% to 54% of the amount of all herbicides applied to field corn during that period. Furthermore, the decline in the total amount of herbicide applied occurred despite an 11% increase in the area grown to field corn (Figure 1). 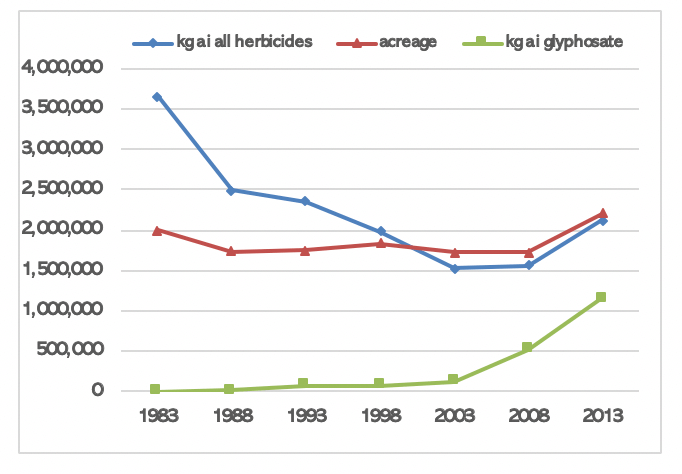 Figure 1. Amount of herbicide applied to field corn and acreage grown in Ontario from 1983 to 2013. Drawn from OMAFRA data by Dufault & Saik. 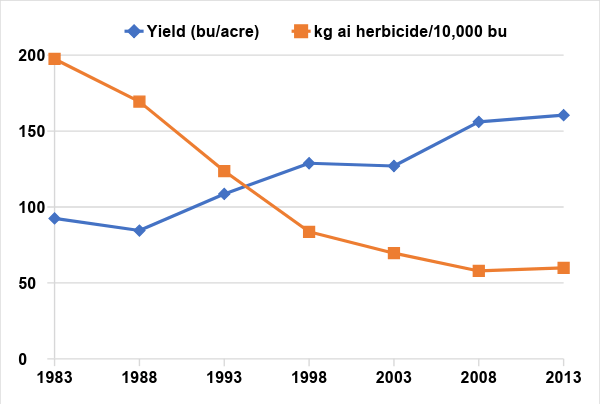 Soybeans are also a good news story. Between 1983 and 2013, despite the acreage of soybean grown in Ontario increasing by a massive 188%, the total amount of herbicide applied increased by just 47% (Figure 3). As with field corn, this is largely due to the replacement, by glyphosate, of other higher-rate herbicides; usage of glyphosate increased from 2% to 82% of all herbicides applied during that timeframe (Figure 3).

In that same 30-year period, the yield of soybean increased by 53% (Figure 4). And the amount of kg ai of all herbicides applied per bushel produced declined by an impressive 67% (Figure 4). 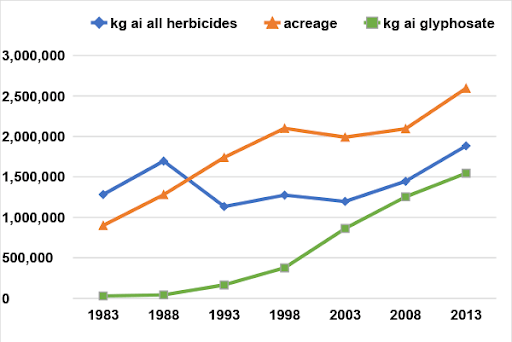 Figure 3. Amount of herbicide applied to soybeans and acreage grown in Ontario from 1983 to 2013. Drawn from OMAFRA data by Dufault & Saik. 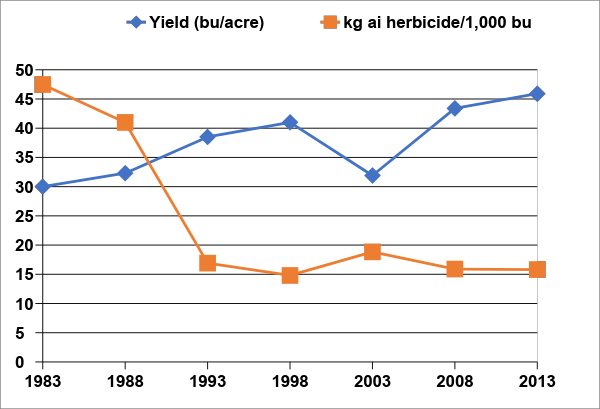 Figure 4. Yield of soybean and amount of herbicide applied per 1,000 bushels in Ontario from 1983 to 2013. Drawn from OMAFRA data by Dufault & Saik.

From an agronomic perspective, glyphosate has been referred to as a “once-in-a-century herbicide.” Being a broad-spectrum herbicide, it controls virtually all species of weeds and has been utilized mostly in conjunction with herbicide-tolerant crops since their first appearance in the mid-1990s. Glyphosate also largely eliminates the need for several applications of multiple limited-spectrum herbicide active ingredients that would otherwise be needed to control all the species of weeds present. Not only do these other herbicides generally have higher hazard/risk profiles (discussed below), but they are often more phytotoxic. The resultant crop damage reduces yields unlike when glyphosate is used in herbicide-tolerant crops. Economists have estimated that if the world ceased to grow genetically-modified herbicide-tolerant crops in the absence of glyphosate, the annual loss of farm income would be $6.76 billion and there would be substantial declines in the production of soybean, corn and canola.

The widespread adoption of glyphosate has also resulted in decreased tillage (or soil cultivation) as farmers have adopted minimum or zero tillage growing systems. This has profound implications because reduced tillage means lower greenhouse gas emissions from burning less fossil fuel as well as from reduced decomposition of organic matter in the soil. Additionally, the associated increase in soil tilth brings better water holding capacity and increased soil health.

Based on the data just cited, it is apparent that the amount of herbicide used to produce field corn and soybeans in Ontario has declined due to glyphosate largely replacing other major herbicides that are applied at higher rates.

But, does a lower rate of application also mean reduced risk?

In conjunction with the results of the pesticide use survey, Ontario also published a report on the environmental risk associated with pesticide use in Ontario. This report used an Environmental Impact Quotient (EIQ) to estimate the hazard associated with the use of each pesticide recorded in the survey. Essentially, the EIQ is an indicator of the potential of a pesticide to cause harm. The EIQs for different pesticides can be compared and the higher the EIQ value, the greater the possible harm such as to farm workers, consumers and ecosystems.

Different ways of calculating an EIQ are found in the published literature. The particular EIQ used by Ontario in this study is calculated based on data taken from 12 different data points from safety tests conducted on pesticides in the laboratory and the field. Briefly, these include measures of short- and long-term toxicity in laboratory animals, half-life, whether systemic in plants (i.e., tendency to circulate through plant tissues), leaching and runoff potential, and toxicity to several species of non-target animals.

The reported EIQ for glyphosate was calculated to be just 15.3 which is the tenth lowest EIQ of all the pesticide active ingredients from the survey. Furthermore, glyphosate has partially replaced the use of herbicides with higher EIQs, including atrazine (EIQ = 22.9) in corn, and metolachlor/s-metolachlor

(EIQ = 22.0) in corn and soybeans, meaning it is less hazardous than these herbicides. This low EIQ for glyphosate is not surprising, considering that it is “less acutely toxic than common chemicals such as sodium chloride (salt) or aspirin.”

So, what about risk? This can be called environmental impact (EI) and is essentially hazard (EIQ) multiplied by exposure (i.e., amount used). Not only does glyphosate have a lower EIQ than the above-mentioned major herbicides that it replaces, but it is also recommended in Ontario for application at a lower rate per acre than the other herbicides when applied on their own. Whereas, the Ontario study calculated EIs for the use of glyphosate in the whole province, we have done so on a per acre basis. The combination of factors – lower EIQ and lower rate – means the EI for glyphosate per acre of field corn, for example, is about 60% less than for the major herbicides that it replaces (Figure 5). 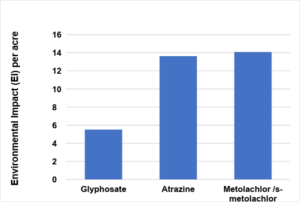 Figure 5. Environmental impact (i.e., risk) per acre of glyphosate and two other herbicides in field corn in Ontario. Source data: EIQs from OMAFRA x recommended rates in Ontario of these herbicides applied on their own. Drawn by Dufault & Saik.

So, all the above is good news for producers and the environment. But it’s fair to say that the 12 data points used in estimating the EIQ are taken from a fraction of all the health and environmental studies done to assess the safety of pesticides. And, there’s the 2015 report from the International Agency for Research on Cancer (IARC) of the World Health Organization (WHO) that classified glyphosate as “probably carcinogenic to humans”.

This report has engendered much controversy as evidenced by the many points of view that can be found in the science community. We will simply say the following:

Here’s a small sampling of what some of these regulatory agencies have published:

While both corn and soybean acreage AND yield have increased in Ontario since 1983, the overall environmental impact of herbicide use per acre has declined in large part because glyphosate has displaced other more harmful major herbicide chemistries.

This reduction in risk is due to 1) glyphosate being less hazardous, based on the EIQ, compared with these other herbicides, and 2) glyphosate being applied at a lower rate. Major regulatory agencies, such as Canada’s PMRA, have recently reconfirmed the safety of glyphosate and renewed its registration.

Glyphosate has played a key role in enabling many farmers to achieve excellent weed control in herbicide-tolerant crops while adopting reduced or zero tillage. This reduction in cultivation has positive implications for the environment in terms of soil health, water holding capacity and greenhouse gas balance.

Christopher P. Dufault is a professional agrologist, and the former head of the Re-evaluation and Use Analysis Section of the Pest Management Regulatory Agency in Canada. Currently, he is a senior agri-coach with Agri-Trend and principal of Christopher P. Dufault & Associates Inc., based in Ottawa, Ontario, Canada.  Email him at Christopher.dufault(at)cantab.net

Robert Saik, a professional agrologist and certified agricultural consultant, is the founder of Agri-Trend and principal of Saik Management Group Inc., based in Olds, Alberta, Canada. Email him at [email protected] Follow him on Twitter @RSaik