Activists spend all day peddling nonsense. If they spent that kind of time on constructive issues…sigh.

[A] local radio station [recently promoted] an upcoming program called “Battling Misinformation And ‘Bad Advice’ About Science And Your Health” and they said that a doctor was going to be on to talk about it. I was intrigued, but wary. This same program once used a link to Mike Adams’ site as “evidence” on a topic. 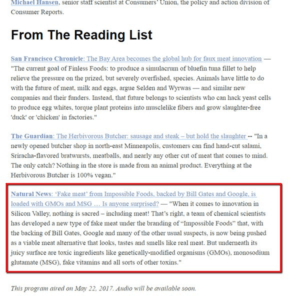 Paid campaigners are spending all day trying to get their messages out. Sometimes they succeed by getting items published in legitimate outlets, giving oxygen to their conspiracy theories and getting a veneer of credibility that they do not deserve. Stephanie Strom pushed information out via the the New York Times regularly for the anti-vaccine Organic Consumers’ Association or the Chipotle marketing team. The Guardian regularly stenographs Carey Gillam’s law-suit supporting unpublished data conspiracies from her work at US Right To Know.

We used the meme-of-the-week @tweetcloudbot to examine what some of the activists spend their time talking about. Hilariously, their fixation about Monsanto is immediately clear. No word on how they are going to transition this hate to Bayer yet — I never saw Bayer come up in the clouds. But let’s have a quick look at their oeuvre:

US Right To Know — a group funded in large part by the anti-vaccine Organic Consumers Association — has a particular fixation with Monsanto and glyphosate (Gary Ruskin and Carey Gillam are well paid to do this). Zen Honeycutt, a regular peddler of bad science and low-quality fearmongering testing claims, who was a source of bad claims in Carey Gillam’s Hogwash book, has a similar collection. I actually think the “VIA” is funny. This is part of the echo chamber that spreads the same information around and amplifies it.

Let’s compare this with the scientists who are regularly shouted down as being Monsanto shills. What do they talk about?

A couple of other amusing entries in this exercise: The Institute for Responsible Technology (sounds impressive, but we nicknamed it the Living Room for Responsible Technology because it’s not really an “institute”. Here’s a helpful graph to see where that sits in credibility.). Run by Jeffrey Smith, a swing dance instructor who has fearmongered for years on GMOs, let’s see what he liked to talk about.

Related article:  Video: Why many food companies won't pick a side in the GMO debate 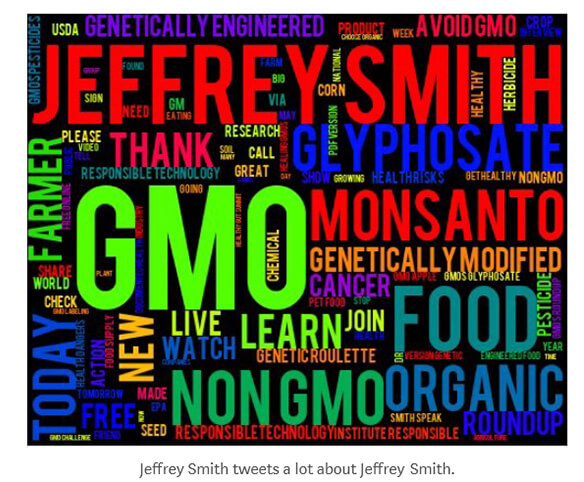 In this unscientific overview of the main social media topics of these groups, it is fascinating to see how much time and effort the voices of fearmongering and conspiracy theory are spending on the various issues. It makes me wonder what they could do if they set their focus on constructive discussion of the things they claim to support, rather than trash-talking GMO technology constantly.

But what is perplexing about this: the scicomm arena professionals tell us to provide good stories about our values, and the things we care about (like science and evidence and that sort of stuff). We are trying to do that. We tweet about research, about science projects, about data. But we are not tweeting in a vacuum. We are trying to be heard over the fog of misinformation and fear that paid activists are pushing. We have to spend copious amounts of time un-fogging the misinformation before we can get to discussions of the things we value. Nobody is putting peer-reviewed research on superweeds in the NYT, but they are putting unpublished poor-quality fearmongering from anti-vaxxers up. We’re doing what we can. But we don’t have the resources and mechanisms that paid activists do.

Mary Mangan PhD is a genomics scientist, with credentials in microbiology, immunology, plant cell biology and molecular biology. Follow her on Twitter @mem_somerville

This article originally appeared at Medium as Anti-science misinformation campaigns are aggressive echo chambers. #Scicomm can’t compete and has been republished here with permission.