Genes and giraffes: What do those spots tell us?

This article or excerpt is included in the GLP’s daily curated selection of ideologically diverse news, opinion and analysis of biotechnology innovation.
Spots are common in the animal kingdom. Birds, insects, reptiles, fishes, and of course mammals sport spots.

In Darwinian terms, a trait persists because it provides a benefit that leads to reproductive success – the essence of natural selection. The benefit isn’t always obvious to us. Two years ago DNA Science covered the case of an anteater’s scales – genome sequencing revealed that what looks to us like armor actually provides an immune response to skin infections.

Rudyard Kipling’s (1865-1936) Just-So Stories famously explained “how the leopard got its spots,” “how the camel got his hump,” and “how the rhinoceros got his skin.” The ideas of Kipling, a journalist, writer, poet, and novelist, seem superficially to echo those of Darwin and Lamarck in pondering evolutionary advantages of inheriting traits distinctive for a species, but diverge in attributing a purpose and goal to changes driven by natural selection. Biology doesn’t work that way.

Now joining the list of the leopard’s spots, camel’s hump, rhinoceros’ skin and pangolin’s scales is the giraffe’s markings. The new report, “Seeing spots: quantifying mother-offspring similarity and assessing fitness consequences of coat pattern traits in a wild population of giraffes,” published in the journal Peerj, uses image analysis and statistics to fashion “a new quantitative lexicon for describing spots.” It’ll remain to others to sequence more giraffe genomes to figure out whether the animal is of a single species with nine subspecies, or four species.

Derek Lee from Wild Nature Institute, Concord, NH; Douglas Cavener from Penn State; and Monica Bond from the University of Zürich photographed the hides of 31 maternal-calf pairs of Masai giraffes, deducing who went with whom by following their subjects from the nursing stage. Giraffe moms don’t feed the young of others. Masai giraffes, the most populous subspecies, are native to East Africa.

A giraffe’s spots and blotches are superimposed upon dark grey skin. The pattern arises from an initial distribution of melanin-producing cells in the embryo, and later on, where and to what extent the melanocytes release their dark pigment. 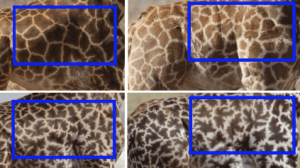 To standardize the photos and avoid counting speckles instead of spots, the investigators marked rectangles on the images of the hides and designated a unit of a certain number of pixels in height a “GU,” for “giraffe unit.” For a measurable trait they tracked survival, to test the hypothesis that certain coat patterns protect the babies. They also followed the young through four stages, from 2012 to 2016, using a capture-mark-recapture protocol.

The gist of the statistics was to assess how similar maternal spot patterns were to those of their offspring. If surviving calves more closely resembled their mothers than did calves that didn’t make it, then heredity likely influences the variability of spot pattern.

The analysis showed that newborn giraffes with larger, rounder or slightly irregular but smooth spots with solid colors were more likely to survive their first few months than differently adorned juveniles. Spot pattern can provide protection in a number of ways. “Giraffe spot patterns are complex and can be quite different among individuals. Complex markings can help animals evade predators, regulate their temperature, or recognize family or individuals, all of which can affect their ability to survive and reproduce,” said Lee.

Related article:  Viewpoint: FDA must do more to protect consumers from 'outright fraud' of dietary supplements
Follow the latest news and policy debates on agricultural biotech and biomedicine? Subscribe to our newsletter.
SIGN UP

Like zebras appearing to vanish with the visual effect of motion and light on their stripes, so too can spots and splotches provide camouflage. “Giraffe calves spend much of their time, day and night, hiding in the dappled light of trees and bushes and their ability to match this background should influence detection by visually hunting predators such as lions and hyenas,” write the researchers. Sharing a distinctive coat color pattern might help family members recognize each other for social interactions yet avoid mating with each other. 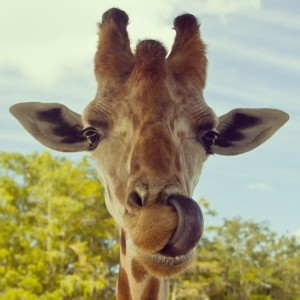 “Dr. Anne Innis Dagg, the first giraffe field researcher in Africa, presented evidence in 1968 that the shape, number, area, and color of spots in giraffe coat patterns may be heritable, but her analysis came from a small zoo population. We used wild giraffes and modern imaging and analysis techniques to confirm her conclusions,” said Bond, a graduate student in evolutionary biology and environmental studies.

We humans pride ourselves on our use of language, our technology and inventions, and our abilities to investigate the abilities of other species. The new work adds to ways that we can understand the meaning of coat color patterns in the wild, continuing the observations of Darwin, Lamarck, and Kipling.

(A semantic aside. The measure “heritability” estimates the degree to which genetics contributes to the variability of a trait – not to the trait itself. This is almost always misreported – even the authors of the new paper do so in the news release quoted above.)

The Sacramento Zoological Society, Columbus Zoo and Aquarium, Tulsa Zoo, Tierpark Berlin, The Living Desert Zoo and Gardens, Cincinnati Zoo and Botanical Gardens, and Save the Giraffes supported the work.

Ricki Lewis is a science writer with a PhD in genetics. The author of several textbooks and thousands of articles in scientific, medical, and consumer publications, Ricki’s first narrative nonfiction book, “The Forever Fix: Gene Therapy and the Boy Who Saved It,” was published by St. Martin’s Press in March 2012. In addition to writing, Ricki provides genetic counseling for parents-to-be at CareNet Medical Group in Schenectady, NY and teaches “Genethics” an online course for master’s degree students at the Alden March Bioethics Institute of Albany Medical Center. Follow her on Twitter @rickilewis

A version of this article was originally published on PLOS Blogs’ website as “How the Giraffe Got Its Spots: A Genetic Just-So Story” and has been republished here with permission.