PEW survey: Half of Americans believe GMOs pose health risks and are linked to use of food additives

A new Pew Research Center report shows an American public that is closely divided over [food] additives, and genetically modified (GM) crops …. What’s more, a closer look at these public divides tell a larger story about how Americans assess science. 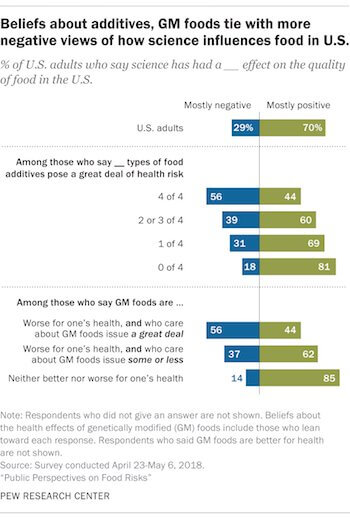 About half of the public (51 percent) believes the average person faces a serious health risk over the long term from eating foods with additives …. Similarly …. about half (49 percent) consider [GM] foods to be worse for one’s health than foods with no GM ingredients, while 44 percent say GM foods are neither better nor worse than non-GM foods ….

These beliefs do not exist in isolation from one another …. those who see more health risk from food additives also tend to see GM foods as worse for one’s health than non-GM foods ….

[P]eople have their own set of beliefs about these issues [which] are consequential when it comes to their assessments of science. For example, among those who say that all four types of food additives considered in the survey pose a great deal of health risk, 56 percent believe the effect of science on the quality of food has been mostly negative …. By contrast, 81 percent of those who say none of the four types of food additives pose a great deal of health risk believe that science has had a positive effect on food quality in the U.S.

Read full, original article: What Do Americans Think about Food Additives and GMOs?