Why are farmers so eager to grow GMO crops?

Genetically modified (GM) crops are produced using new genetic engineering methods. Since their development slightly over 20 years ago, they have become a significant portion of several high acreage crops in the U.S. and other countries. Once developed and approved for commercial production, many producers quickly implemented them. Why is that? What is it about GM crops that most producers find attractive? 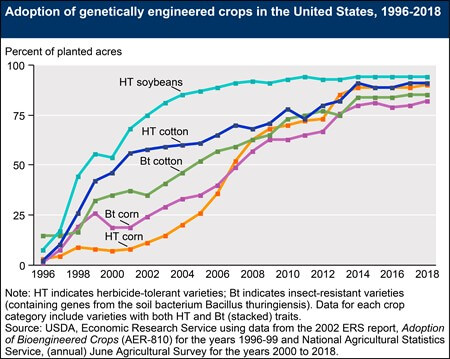 The first answer for most is cost savings and ease of production. With U.S prices for most agricultural products steadily declining and grower costs steadily increasing, agricultural producers are always looking for production practices and technologies to help reduce costs. This includes new production techniques, higher yielding varieties and practices allowing them to reduce their expenditures, including pesticides and herbicides—this is what most GM crops do.

Related article:  Podcast: Save our forests with GMO trees? Let's look at the costs and benefits first

A 2018 article in Nature Scientific Reports is a review of the combined findings of 6,000 scientific articles from over a 21-year period. The authors report GM corn increased yield up to 10 percent, primarily due to a 60 percent reduction in loss due to insect damage.

Given the chance to produce a higher quality product with a 10 percent yield increase without additional costs, it is easy to see why farmers would choose GM corn. This is not only true for corn in the U.S., but in other countries and for other crops.