10 GMO memes backed up by science

For years the anti-GMO machine has been churning out propaganda featuring scary scientists injecting tomatoes with needles full of water and food coloring. But something happened several years ago, scientists and science enthusiasts began fighting back. The rise of social media has allowed them to share their love of science, and hope for the future, with the masses. Here are some of my favorite examples:

This is one of the first I came across. I can’t remember if someone sent it to me after I started We Love GMOs and Vaccines because Chuck was thinking the same thing, or if it helped inspire the page name. Either way it sums up our point. Both movements oppose biotechnology and are selling the idea that “natural” is better and anything made by corporations is automatically evil.

This is another that has been floating around social media for a few years. On the left is teosinte, the genetic ancestor to modern corn. Those fearful of biotechnology will often claim that artificial selection is natural but genetic engineering is not. But it depends on your definition of “natural”. Artificial selection involves humans selecting traits that are beneficial to humans, not ones that are beneficial to the organism’s survival in the wild. Corn would never have evolved without man’s intervention, there is nothing natural about it. On the other hand, recently researchers have discovered that bacterium transfer naturally contributed to the creation of the sweet potato.

Does that mean genetic engineering using that technique is even more natural?

Golden rice has been the poster child for the pro-GMO community long before I came on the scene. With technology donated by Syngenta for this public project, the hope has been to use a staple diet (rice) in developing countries to prevent blindness caused by vitamin A deficiency. Greenpeace has been waging war on it since the 1990s when they had an undercover operative working on the project leak details that allowed them to steal the seeds while in transit. Since then they have a nasty habit of destroying field trials, and then screaming about not enough testing. If a project like golden rice is allowed to succeed the anti-gmo movement would lose their biggest talking point, “corporations”. 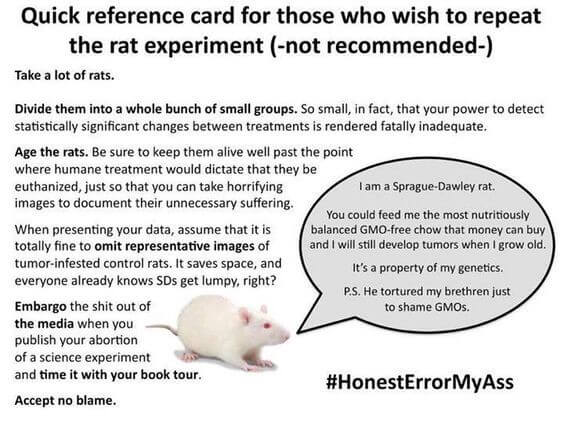 The infamous, and retracted, Seralini study was retracted for a reason. This sums it all up beautifully. It was later republished without peer review, and Seralini recently won a case in France because a journalist there said he was an intentional liar. Something the first amendment in the United States gives me the right to do.

Anti-GMO crusaders think Monsanto is so powerful that it owns everything and everyone. From supreme court justices to Hillary Clinton’s campaign, they see Monsanto everywhere. For the record Clarence Thomas worked there for only a couple of years in the late 1970s, and he hated it so much he went running to the public sector. Clinton’s campaign, as revealed by Wikileaks, actually had close ties to the organic movement. Gary Hirschberg, Stonyfield exec and founder of Just Label It, was quite influential with her attempt to move back in to the White House.

This demonstrates how products produced (or partially produced) with genetic engineering are substantially equivalent to the conventional versions. Sugar doesn’t even contain DNA by the time all of the processing is done to make it. Why demonize family farmers in the north who are only growing sugar beets because this technology makes it economically possible when you have the cane sugar barons in the south destroying the Everglades?

Once again Professor Folta is able to so eloquently demonstrate the hypocrisy of the anti-GMO movement. In the 1970s and into the 1980s anti-GMO leaders like Sheldon Krimsky did indeed speak out against making insulin from GE bacteria, and activists in Germany forced a production facility to close. But that fear seems to have subsided in favor of scaring people about herbicide tolerant crops. The only problem is that you don’t need that technology to make herbicide tolerant crops. Mutagensis and artificial selection works just as well. 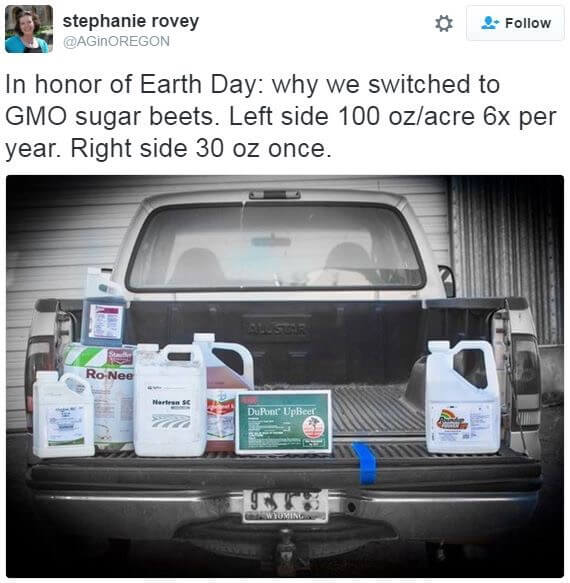 This is more of a screenshot than a meme, but it still summarizes the point perfectly. Genetically engineered sugar beets, as mentioned before, don’t get enough credit for helping the environment. The sugar cane barons have embraced the Non-GMO Project label, officially making the non-GMO groups shills for the Fanjul Bros.

There are many ways to genetically modify crops. This is why the FDA states that the term non-GMO is very misleading. The term “non-GE” would be honest.

Did you know that many vitamins used to fortify our food are produced from genetically engineered yeast and bacteria? The Non-GMO Project is so ideologically opposed to biotechnology that they will not allow these types of vitamins in food using their logo. Their web page talks about getting ridding our food supply of herbicide tolerant crops, but appears to skip over this inconvenient truth.

A version of this article was published by the GLP on May 30, 2017. It first appeared at Medium as “10 Best GMO Memes” and was republished with permission.

Stephan Neidenbach is a middle school teacher in living in Annapolis, Maryland. He holds a BS in business administration from Salisbury University and an MS in Instructional Technology from University of Maryland University College. He started and runs the Facebook group We Love GMOs and Vaccines. Follow him on Twitter @welovegv