In a response to anti-GMO campaigners requesting endorsement, the Union of Concerned Scientists (UCS) promised to look into it in exchange for funding. 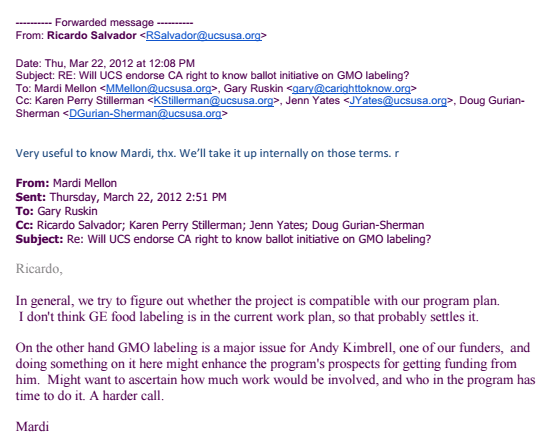 Leading the campaign in favor of labeling was Gary Ruskin of California Right to Know. Given UCS’ prior negative reports of biotechnology, it more than likely seemed logical for Mr. Ruskin to reach out to them for endorsement.

Margaret Mellon, UCS Senior Scientist until 2014, responded that it wasn’t on their agenda. But because Andrew Kimbrell (founder and executive director of Center for Food Safety) was a donor, they would consider it based on the idea that it would get them more funding.

Director of the UCS Food & Environment Program, Ricardo Salvador, found the idea of funding from Kimbrell to be very “useful to know.” He went on to say that they would “take it up internally on those terms.”

UCS even promotes Kimbrell’s Center for Food Safety on their web page without disclosing this conflict of interest. Doug Gurian-Sherman, another UCS Senior Scientist, also worked for Kimbrell’s organization both before and after his time with UCS. Again, funding from Kimbrell does not appear to be disclosed despite this connection.

Read full, original article: Union of Concerned Scientists are only concerned if they are paid to be