This article or excerpt is included in the GLP’s daily curated selection of ideologically diverse news, opinion and analysis of biotechnology innovation.
Food and Drug Administration (FDA) Commissioner Scott Gottlieb has stepped down after 23 months in the job. His nomination, a little over two years ago, was widely welcomed as his background and training were good preparation for the post, and he is widely respected despite some close ties to industry. When he resigned, Gottlieb’s boss, Health and Human Services (HHS) Secretary Alex Azar, said that, “He has been an exemplary public health leader, aggressive advocate for American patients, and passionate promoter of innovation.” Is this a fair assessment?

Gottlieb does deserve credit for a number of accomplishments. Secretary Azar mentioned specifically “record approvals of both innovative treatments and affordable generic drugs, while advancing important policies to confront opioid addiction, tobacco and youth e-cigarette use, chronic disease, and more.” Some of these are true. However, his campaign against e-cigarettes was not solely focused on youth abuse and seemed uninformed by the fact that the  health risks of e-cigarettes are substantially lower  than those of cigarettes. And some argue he didn’t do nearly enough to address the opioid crisis. 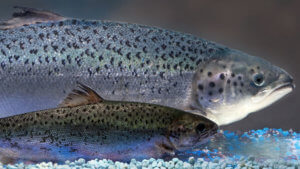 And he deserves high praise for finally freeing the AquAdvantage salmon to be marketed in the U.S. This should have happened when it was finally approved by FDA in 2015, after an exhaustive examination making it the most studied fish in history, but politics intervened. Gottlieb finally cut the Gordian knot and freed the fish, thus making it possible for salmon farmers to reduce threats  to wild salmon populations and  habitats thanks  to this competitor being grown in landlocked tanks.

But Gottlieb leaves behind at least two important dropped balls. For nearly his entire tenure he stood mutely aside as false and misleading food label absence claims, particularly those from the Non-GMO Project, proliferated. This clearly led to widespread confusion and the defrauding of consumers while stigmatizing safe, nutritious, more sustainably produced  foods that happen to be produced through the most modern breeding methods. As one of his last acts, Gottlieb’s FDA issued a revised guidance document to remind folks of the law on food labeling, (which make it clear that virtually everything the Non-GMO Project does with its butterfly logo is illegal, as we have noted…). But this notice does

not establish legally enforceable responsibilities… [but only describes] the agency’s current thinking on a topic and should be viewed only as recommendations, unless specific regulatory or statutory requirements are cited. The use of the word ‘should’ in agency guidances means that something is suggested or recommended, but not required.

This does not get the job done, and leaves consumers still vulnerable to being misled by unscrupulous marketers. FDA’s notice shows that the law is clear, as it has been all along. Enforcement action is now required, and overdue.

But worst of all, Gottlieb’s policy proposals for FDA oversight of gene-edited plants and animals were as inexplicable as they were inconsistent with longstanding U.S. policy, and widely seen by innovators to be hostile and disincentivizing to innovation, despite Azar’s contrary assertion. For more than three decades U.S. policy for crops, animals, and microbes improved through biotechnology has been that they should be regulated according to their characteristics, in such a way as to avoid unreasonable risk.

The process used to produce them is neither a legitimate nor permissible trigger for regulatory oversight, inasmuch as it reveals nothing about the intrinsic hazard a product may present to those exposed to it. But FDA’s proposed approach to regulating gene-edited plants and animals turns this time-tested, commonsense approach on its head, requiring instead that those proposing to bring products developed with these techniques to market first prove that they are safe, a logical impossibility.

But existing law already prohibits the sale of foods that are either unsafe or adulterated, and lawbreakers are held to account. But with Gottlieb’s proposed policies, FDA places enormous obstacles in the path of innovation in ways that cannot help but unnaturally prolong reliance on obsolete and less safe products. FDA’s approach would outlaw innovations that cannot be distinguished  from naturally occurring genetic variation, all without the faintest shred of scientific justification, in a way that experts in the field have roundly condemned. Let us hope that Gottlieb’s successor, whomever he or she may be, will revisit this issue and follow the science.

Val Giddings is a senior fellow at the Information Technology and Innovation Foundation. Follow him on twitter @prometheusgreen

This article was originally published on the Information Technology & Innovation Foundation’s website as Gottlieb Is Out at FDA. How’d He Do? and has been republished here with permission.