When NASA reported preliminary observations about the famous “twin astronaut” study a year ago, the media rushed in, reporting the effort with mind-boggling inaccuracy. The agency was quick to correct the confusion of gene mutations with changes in gene expression, promising a full paper once the findings were more fully scrutinized. Long-awaited, “The NASA Twins Study: A multidimensional analysis of a year-long human spaceflight,” appears in the April 11 issue of Science.

To recap, Scott Kelly (Space Twin) spent a year aboard the International Space Station (ISS) while his identical twin Mark (Earth Twin) stayed in Arizona. Both men are 50 years old. Mark, also an astronaut, is married to Gabrielle Giffords and is running for senate in 2020.

With last year’s bizarre overreaction, it’s understandable that announcement of the full paper to reporters ahead of publication set the stage for a news blitz. The four press releases, images and videos, a list of quotes from NASA scientists, phone news conferences from Science and NASA, a summary, web materials, and a short feature article in Science sent my hype-o-meter into overdrive.

Much of the news isn’t news – Genetic Literacy Project covered it a year ago. Plus, many of the monitored biological functions didn’t change much in space or did so only transiently.

Markus Löbrich and Penny A. Jeggo, experts in genome damage and DNA repair, wrote the accompanying excellent article “Hazards of human spaceflight: A 1-year mission in space has many biological consequences.” They provided context for the full paper by listing the challenges of living in space: noise, isolation, poor oxygen supply, disturbed circadian rhythm, weightlessness, and exposure to ionizing radiation.

Especially concerning is the infrared (IR) radiation in cosmic rays, because it can shred DNA. That plus living for an extended period without the full gravity under which humans evolved poses theoretical biological risks to extended space travel. Drs. Löbrich and Jeggo point out that a journey to Mars would take only about 300 days, but would expose astronauts to five times the level of IR as Space Twin experienced. Will genomes shatter and blood vessels burst on the way to Mars? 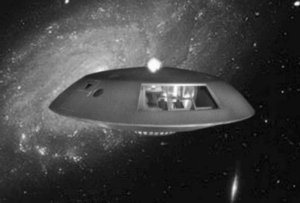 Skipping the media materials, I dug into the technical paper and the spectacular graphics that festoon many of the 20 pages with charts, tables, trees, curves, and fabulous mosaics of the sweeping ‘omics data. Papers reporting ‘omics data are peculiar in that they may include voluminous stats on a very few actual individuals, or even just one, such as estimates of the bacterial population of a single human intestine. Or the waxing and waning of metabolites in a lone astronaut.

The paper sorts the dozen or so types of measurements and assays into three risk categories, assessing  everything for pre-flight, in-flight, and post-flight for Space Twin and comparing some to Earthling Twin.

Of 481 genes assessed for their expression in Space Twin’s white blood cells, 112 stayed different post-flight. Of 9,317 genes assessed in many cell types, 811 changed expression and stayed that way for awhile after landing. More of these changes happened during the second six months, which is the important point for considering long-term space flight.

(An aside on gene expression: it happens. Doing anything — skiing, eating, vomiting, reading, hugging, yelling — changes the levels of many proteins as different genes are turned on or off at different rates. I’d be stunned if Space Twin’s gene expression profile didn’t shift — it would mean he was dead.)

Looking at 245 proteins that affect metabolism didn’t show much change, except in response to stress (at the cellular level), inflammation and amino acid metabolism. Space Twin’s neutrophil (white blood cells that attack bacteria) and platelet activity were up. His body was clearly reacting to something.

Telomeres can be telling. These chromosome tips shorten with age and stress, lengthen with cancer and stay long in stem cells. Space Twin’s telomeres temporarily grew, compared to before the flight and to Earth Twin’s. But they shrunk back down within 48 hours. A few appeared to have a lot of shrinkage, which concerned the NASA folks.

Telomeres re-appear in this middle category because of an apparent loss of a few in Space Twin’s cells. A few telomeres might be too short to detect, or vanished somehow during analysis. Here’s where a sample size greater than one individual would help.

Space Twin’s urine had an increase in two types of collagen that form part of blood vessel walls, but the levels returned to normal range post-flight. Still, a distended carotid artery with a thicker wall in Space Twin suggest that the collagen changes might stress blood vessel integrity on a long trip.

The collagen and carotid changes could be part of a body-wide effect of exposure to sustained low gravity on fluids, which might be behind the 10 percent increase in cardiac output seen in Space Twin. Fluid redistribution in response to microgravity might also explain the increase in thickness of Space Twin’s jugular vein and in the skin of his forehead.

A “cephalad fluid shift” isn’t a bloated octopus, but the moving upward of fluid in a human body under low gravity conditions. This can cause “spaceflight-associated neuro-ocular syndrome,” or pressure on the brain that pushes on the back of the eye, changing its shape.

The pressure thickens the part of the eye that has blood vessels (the choroid) as fluid builds up in the retina. Space Twin’s choroids and retinas thickened in flight, but were okay before and after.

The eye effects weren’t surprising. According to NASA, “more than half of American astronauts experience vision changes and anatomical alterations to parts of their eyes during and after long-duration space flight.” But the twins share six of nine genetic markers for inherited eye issues, so they might not represent all of us.

Not surprisingly, the immune response revs up when a human body finds itself in outer space. Gene expression comparisons reveal many aspects of inflammation and immunity on high alert. Of 62 cytokines measured, for example, 50 spiked before, during, and after the flight.

The investigators found “3 notable signatures of inflammation,” groups of molecules that increased after return, rose before and during but fell after, and those that shot up after landing. However, all levels of immune system biochemicals returned to normal within 36 days of landing. But what would happen on a longer trip?

Genomic changes ensued too. Space Twin’s DNA had more inversions (places where chromosome parts flip), possibly due to exposure to infrared radiation, compared to the DNA of Earth Twin. The inversions and a few translocations (chromosomes exchanging parts) persisted for awhile, suggesting that stem cells had been sensitive in space.

DNA repair genes were differently expressed between the twins. Impaired repair causes genomic instability, which along with the curiously changeable telomeres can be a prelude to the loss of cell cycle control that is cancer.

The information on cognition was confusing. Space Twin took a lot of tests, like in the opening photograph. He became cognitively sharper (alertness, speed and accuracy on tests) in-flight compared to before, and these effects persisted for about six months, but the study also found cognitive deficits after the flight. I’d be mixed up too! If we can have chemo brain and menopause brain, space brain is certainly a possibility.

Flu shots worked on both men, which NASA reported last year. Good to know, but the ISS isn’t known for its crowds.

Space Twin’s urinary output lowered, but he ate and drank less. And his mitochondria appeared revved up, releasing more RNA in flight compared to before and after. Meanwhile, aerobic respiration decreased and anaerobic increased briefly, like it does in a sprinter at the end of a race. These observations could reflect reaction to oxidative stress.

The Twins Study demonstrated on the molecular level the resilience and robustness of how one human body adapted to the spaceflight environment. This study was a stepping stone to future biological space research focusing on molecular changes and how they may predict health and performance of astronauts. It opened the door to new research strategies that are already being advanced in other studies.

While NASA continues to analyze findings of the Twin Study as President Trump promotes his mysterious “space force” and we look forward to season 2 of the rebooted Lost in Space on Netflix, I’d like to see exploration of the vast literature on “twins reared apart.”

Some perspective is needed to get beyond the gee-whiz nature of the Twin Study, at least in the form of experimental controls.

How do the differences between Scott and Mark Kelly compare to those seen, for example, between a person who is a lawyer in Los Angeles and whose twin is a farmer in Peru? Between a marine biologist whose identical twin sister is a performance artist or an accountant?

The findings of the Twin Study are fascinating, but they require context to maximize their value. That one human body is indeed a first step for humankind.