Scammers are having a moment. On this episode of Biotech Facts and Fallacies, plant scientist Steve Savage tackles scams within the agriculture and food realm, including a pesky scam that occurs each year around this time—Environmental Working Group’s ‘Dirt Dozen’ list.

It seems like the world has an ongoing fascination with scammers. Whether it’s tuning into the dueling documentaries about Fyre Festival, the luxury music festival that never was, or the podcast called The Dropout about Elizabeth Holmes’ fraudulent claims about her blood-testing technology and doomed company Theranos, people are captivated by a scheme and con men (and women). Perhaps it’s reveling in the “takedown” of the grifter and vindication of the scammed, or perhaps we enjoy marveling at the sheer audacity of a doomed, and oftentimes, misguided effort. It’s going to take longer than this podcast to get to the root of love of a scam and frankly we don’t have the time, because an annual con called the ‘Dirty Dozen’ has come out once again.

Yes, its that time of year when the Environmental Working Group (EWG) publishes its infamous “dirty dozen” list. They claim they are “guiding” consumers about which foods are most important and to buy organic to avoid pesticide residues, referring to mostly fruits and vegetables. The Group comes up with their rankings based on the published results of the USDA’s Pesticide Data Program.

The USDA data actually shows that consumers don’t need to worry about pesticide residues because they are only present at extremely low levels that are of no concern for our health. Indeed, health and dietary experts agree that one of the best things we can all do for our health is to confidently enjoy healthful foods, and the last thing we should do is avoid fruits and vegetables because of propaganda from EWG.  There is a great website called “Safe Fruits and Veggies” that provides lots of good links on this topic and has a calculator you can use to visualize the absurd amounts of produce you would have to eat to ever see any health effects of residues.

In another episode called “Dirty Marketing,” I explained why the “analysis” by EWG is so flawed and why none of our food deserves to be called “dirty” in this regard. In the whole scheme of things, the only thing that is “dirty” is the EWG’s fear-based campaigning on behalf of their “big organic” sources of funding.

So, let’s talk about the good news, starting with this thing called the Pesticide Data Program or PDP. Each year, scientists from the USDA make visits to commercial food channels and collect more than 10,000 samples of food. They focus on 20 or so crops each year, but they periodically cover most major commodities, particularly fruits and vegetables. The latest data from 2017 analyzed apple sauce, asparagus, fresh and frozen cranberries, cabbage, cucumbers, grapefruit, kale greens, honey, lettuce, mangoes, milk, canned olives, prunes, snap peas, sweet potatoes and garbanzo beans.

The scientists take the foods back to the lab, wash, peel or otherwise handle as normal, and then test for chemical residues. The results are then published in several forms including a high-level “fact sheet”  and a detailed, 200+page report. They also include the raw data so that others can also analyze it. Each year, I like to take advantage of that transparency, although it’s quite a challenge to read through the 2 million-rows of main data table.

So, what the USDA provides each year are three key pieces of information about what they find in chemical pesticide residues: The first concerns which specific chemicals are detected. The second part is what concentrations of the chemicals were found. The third and very important bit of information is how the detections compare to something called a “tolerance.”

For every crop and for every pesticide approved for use on that crop, the Environmental Protection Agency or EPA identifies an allowable level of chemical residual for which it can confidently confirm there are no health risks. It is a conservative threshold based on an elaborate “risk assessment” reflecting everything that is known about that chemical from many toxicological evaluations. If a chemical residue is present at or below the tolerance, it is safe by a factor of around 100.  That means that a residue equal to the tolerance is still 100 times smaller than the smallest amount that would have a negative health effect.

Now, what the EWG does with this data is to treat any residue detected as a problem, essentially ignoring how it compares to the relevant tolerance. Ignoring that critical part of the story is what makes the “dirty dozen list” so misleading.

So, getting back to what the data really says, one thing that can make this a little challenging to understand is that the numbers we are talking about here are extremely small. There are some tiny things that we can sort of understand because we can see them thanks to the power of microscopes. For example, the Pinterest page for “microscopic and tiny things” has a solid following and a pretty cool collection of images. However, small numbers are harder to visualize. You probably remember from school learning about scientific notation as a way to do the math with either really big or really small numbers. It did help get the right answers for the tests, but I’m not sure it helps us really understand the large or small extremes of numbers. Brilliant.org has a whole web page about that issue.

When it comes to chemical concentrations, we are often talking about values in the parts per billion range. But what does that look like? Here is one way to try to imagine such tiny numbers. Harry Potter and the Order of the Phoenix is a really long, but popular, book. It has 257,045 words! Now, imagine that you have a stack of 3,890 copies of that book so that all told you can look at a billion words. The stack of books would be about 324 feet tall. So, if you read just 10 words in one of those books that would represent 10 parts out of a billion words, which is parallel to the kind of chemical residues found on food.

Related article:  Locust invasion has jeopardized the livelihoods of 20 million Africans—now a second wave is coming

Last December, the USDA-PDP posted its analysis of more than 10,000 food samples collected during 2017. For 53 percent of those samples there were no detectable residues at all.  Only five samples had any residue concentrations over the tolerance (that is 0.04 percent of all the residues that were found). Even those five were only marginally higher and thus of little concern because the tolerance already has that 100-fold safety margin built in. Two percent of the samples had minute detections of chemicals for which there is not a specific residue for the crop in question, but they were not of concern according to the regulators. Essentially, there’s nothing here to worry about. 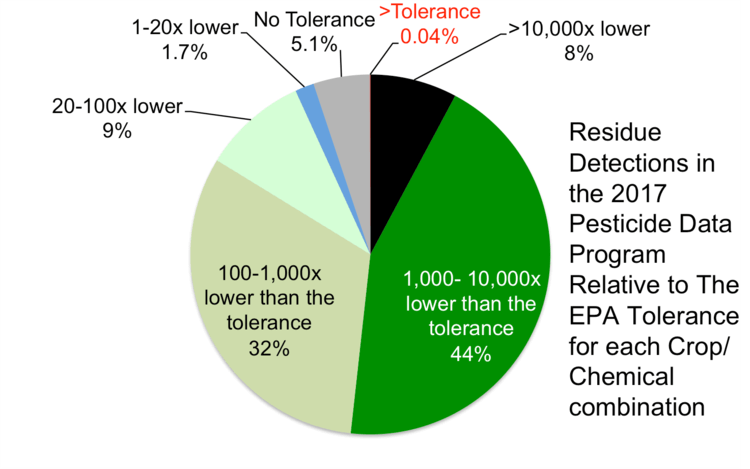 When the EWG does its own interpretation of the data, it essentially treats all these “detections” the same, ignoring how incredibly low-level those detections are and disregarding and EPA’s science. The very fact that these tiny amounts can be identified says much more about the remarkable skills of chemists than anything else.

Now, you might still be thinking, “OK, but wouldn’t it still be better to just have no exposure to residues at all?” Well, realistically, that isn’t an option.

EWG cons many consumers to believe that by buying organic you can simply avoid residues. That isn’t true.

Organic farmers can and do use pesticides while growing their crops.  They generally use “natural” pesticides, but those are still chemicals that must be regulated by the EPA and their toxicity overlaps with that of various “synthetic” chemicals. Keep in mind, organic does not mean “no pesticides.” But what is a bit surprising is that it also does not mean “no synthetic pesticide residues.”

As seen year after year with the PDP and in other testing examples, synthetic pesticide residues are definitely detected on samples that were being sold as organic. For instance, a big study conducted by the Canadian Food Inspection Agency (CFIA) in 2014 found residues on 46 percent of the organic samples they tested.

In the 2017 USDA study, there were 622 organic samples. A total of 302 residues were detected on those foods representing 55 different pesticides. These 2017 detections of chemicals on organic were in the same parts-per-billion range I just described, so again this isn’t a safety concern. All it means that there isn’t the sort of “black and white” difference many people imagine between residues on non-organic and organic foods. 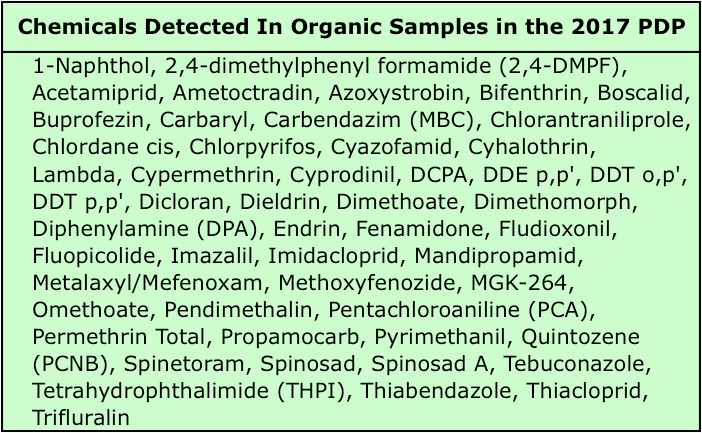 There is an allowance in the USDA Organic Program rules stating that if a synthetic pesticide residue is detected on an organic product, if the level is 5 percent or less of the EPA tolerance, it is considered “unintentional” and thus not a violation of the organic certification standard. The PDP testing isn’t about organic rule enforcement, but, there is a separate set of tests that are performed to check for compliance with the organic rules and the 5 percent rule would be applied for that. 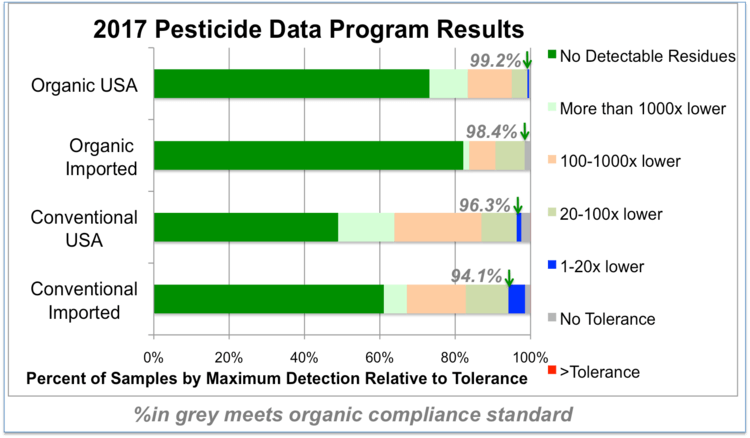 Of the organic samples from the U.S., 99.2% would have met the 5% or less standard and only 0.8% either being those “no tolerance for that crop” situation or falling in the range of 1 to 20 times lower than tolerance. For organic imports, 98.4% met the 5% standard. What is interesting is that 96.3% of the “conventional” samples from the U.S. would also qualify if they had been organic samples being tested for compliance. Ninety-four-point one percent of the imported conventional samples would also meet that standard.

For applesauce, fresh and frozen cranberries, honey, lettuce, milk, canned olives, prunes, canned tomatoes and garbanzo beans, and all of the conventional 2017 samples would have qualified by the 5% rule for organic. Since the conventional items are typically less costly, does it really make sense to spend more than needed around this issue?

So, to sum it up: USDA data for 2017 once again shows us that our food supply is safe when it comes to the issue of pesticide residues. Yes, there are tiny amounts of chemicals that can be detected by skilled chemists, but they are mostly hundreds to thousands to tens of thousands of times lower than even a conservative “tolerance” level. Pesticide residues are also detected on organic product samples, but all at levels that would not technically disqualify the food as “organic.” The same is true, however, for almost all the conventional samples.

The bottom line is that we should reject the kind of fear-mongering that is associated with the EWG’s yearly dirty dozen list and just make sure that our shopping lists include lots of healthy fruits and vegetables.

Steve Savage is a plant pathologist and senior contributor to the GLP. Follow him on Twitter @grapedoc. The Pop Agriculture podcast is available for listening or subscription on iTunes and Google Podcasts.

Podcast: If you get a COVID vaccine, you’re pro-GMO; 5G conspiracies; Lab-grown humans?

Podcast: Save the earth—get a vasectomy? Glyphosate science vs emotion; Will Biden ban safe pesticides?